A couple of days ago I cooked a chicken. It was a Label Rouge bird that came from a poultry producer in the town of Ancenis, which is on the Loire River between Nantes and Angers. And it was a poulet blanc — a "white" chicken — as opposed to another chicken, a poulet noir or "black" chicken, that I had bought in January and that came from Brittany. 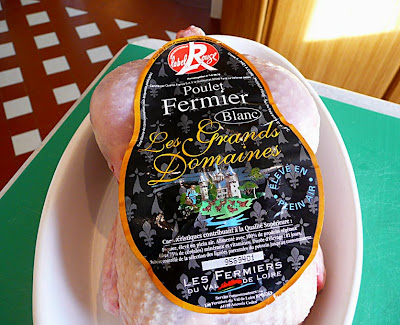 A Label Rouge farm-raised "white" chicken
But don't worry. The poulet blanc and the poulet noir both had the same color flesh. It was the color you expect in a chicken. Both were Label Rouge birds. That means they were raised and processed according to government-sanctioned standards that were defined in the late 1950s and early 1960s.

It was back then that what we call "agribusiness" — industrialized agriculture — was coming into being. The government wanted to encourage farmers to continue following traditional practices and producing high-quality products, as a way of protecting both farmers and consumers. 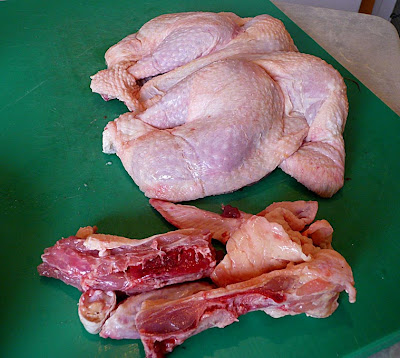 I decided to butterfly the chicken by cutting out the backbone.
Thanks, Julia Child (in The Way to Cook).
The Label Rouge ("red label") standard was published in 1960 and the first Label Rouge was awarded in 1965 to chickens raised in the Périgord (a.k.a. La Dordogne) and in Les Landes in southwestern France. Those birds had to be farm-raised, free-range, "yellow" chickens — « poulets jaunes fermiers élevés en liberté ». Nowadays in France, we have white, black, and yellow chickens to choose from. 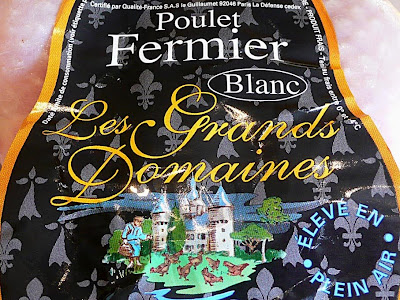 « Domaine » is one of those French words that looks like
it should be feminine, but turns out to be masculine.
The five guiding principles in the production of Label Rouge chickens in France are: 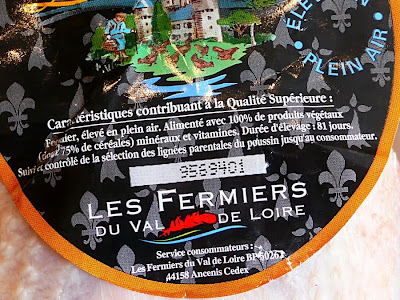 The label says the chicken was raised outdoors, fed a 100% vegetarian
diet (75% grain) with minerals and vitamins. It was 81 days old when
it was slaughtered and was subject to strict regulations before it even
hatched and all the way to delivery of the product to the customer.
Yellow chickens are actually yellow, flesh and skin, compared to black and white chickens, which both have whiter skin and flexh. I've read that yellow chickens are corn-fed, and it's the corn that gives the chicken its yellow color, or at least accentuates it. It may also be that "yellow" refers to the chicken's plumage, as it does, I think, when it comes to black and white chickens. In other words, black, yellow, and white are broad descriptions of various breeds. 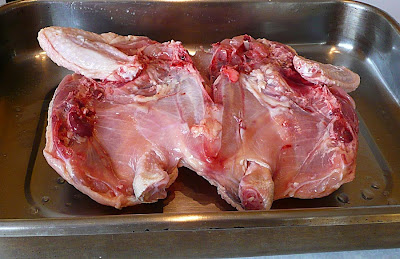 Baste it with melted butter and set it about
8 inches below the hot broiler element for 10 minutes
before turning it over. Baste frequently with butter
and then with the pan juices until it's done.
The poulet blanc that I cooked a couple of days ago was, according to the label, at least 81 days old when it was slaughtered. It weighed almost exactly 3 lbs. — 1.35 kg — as sold, which was « prêt à cuire (P.A.C.) » — "ready to cook" — plucked, gutted, with no giblets, feet, or head. And it was delicious. The breast meat was perfect. The meat of the legs and thighs was firmer but not stringer or tough. 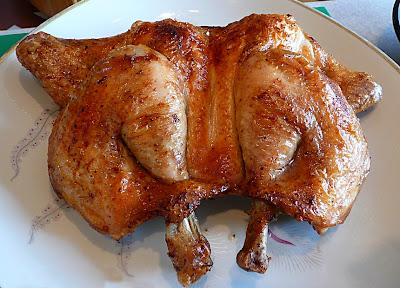 The butterflied chicken cooks a lot faster than a whole chicken.
The legs and thighs cover the breast, which needs less cooking,
and protect it from the high heat of the broiler this way.
I bought this chicken at the supermarket, wrapped in plastic, on a styrofoam tray. At the outdoor markets, the chickens and other fowl are often sold whole and then plucked, trimmed, and cleaned when they are sold. Usually, you choose and pay for the bird, get a ticket from the vendor, go around and do the rest of your shopping, and then stop by and pick up the P.A.C. bird before you leave the market. You can ask to keep the feet and head if you want them.