February 2 is the date of a Catholic celebration called La Chandeleur — it's Candlemas in English. The main thing people in France know about La Chandeleur is that it's the day when you are supposed to make and eat crepes, the thin French pancakes that are served with either savory or sweet fillings.

The word "crepe" in French has a circumflex accent on the first E — crêpe. When a vowel in French has that accent mark on it, it often means that in old French there was an S following the vowel in that word. Over the centuries, the S sound was dropped in the standard pronunciation — languages evolve over time — and at some point centuries ago the spelling was "modernized" so that it better reflected the way the words were actually said. 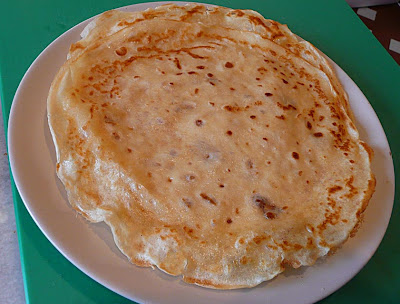 Crepes have crispy curly edges.
For example, the French word château is the same word as the English word "castle" — but with several changes typical of French pronunciation over the centuries. The hard C, pronounced as a K, became a hard CH sound and eventually a softer SH. The S after the A was dropped in pronunciation and finally replaced by an accent mark. And the LE of the end weakened into a very soft L and finally an unstressed O sound — just as it can in English in everyday pronunications of words like "bottle" or "little" when the final L sound is not really pronounced.

So where did the word crêpe come from? It derives from the Latin word crispus. In other words, French crêpe and English "crisp" come from the same root word. Both include the notion of curliness. The edges of a crepe get crisp and curl up a little when you cook the batter. The French word used to be crispe, probably, and evolved into crespe, which became crêpe. 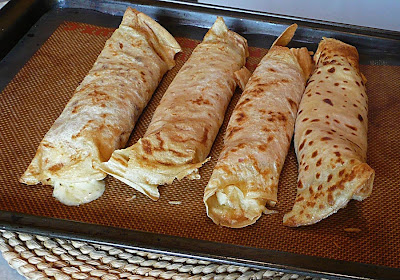 Lay a thin slice of ham over a crepe and sprinkle on
some grated cheese. Roll it all up and cook it in a
medium oven until the cheese melts. It's lunch.
When we made our Candlemas crêpes day before yesterday, Walt and I were saying to each other that their edges got a little crispy, and we weren't sure why. It's just the recipe we used, which I posted here a year or two ago. But now I realize that the edges of the crêpe should be exactly like that. You don't want doughy crepes — they really aren't "pancakes" as we make them in America, thick, soft, and bread-like. They are "crisps."

Sometimes crepes are made with buckwheat flour, as I described in this blog post. Buckwheat crepes are called galettes in Brittany and all around France, are are usually served with savory fillings.

As for the origins of Candlemas — La Chandeleur — Februrary 2 was an ancient celebration of the mid-point of the winter season. We would call it a pagan holiday, and it was based on the weather and the seasons. By early February you can really feel the days getting longer. Spring is not far off. The Christianized Romans turned this pagan holiday into a Catholic celebration. 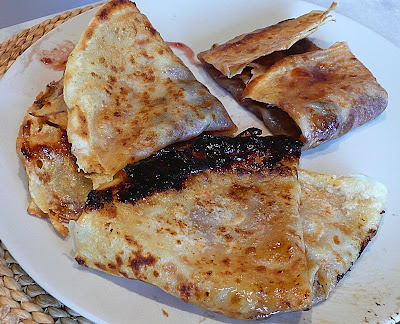 For dessert, put a crepe back in the pan it was cooked in,
spread on some jam or jelly, and then fold or
roll it up one way or another.
In most of the English-speaking world, but not in the U.S., there's a different holiday called "Pancake Tuesday" — or more properly, Shrove Tuesday. Most Americans know it better by the French name, Mardi Gras. It's a feast day that falls on the day before Lent, the Catholic period of fasting and denial.

In the U.S., most of us don't celebrate "Pancake Tuesday" because we don't have the old Anglican tradtions, which derive from Catholic tradition. Our brands of Protestantism did away with all that. But the fact is, any day is a good day to make crêpes.
Posted by Ken Broadhurst at 07:35