I probably oversold it. It wasn't an enormous conflagration, but just a little fire we had been planning to have for quite a while. It was, however, what is called un feu de joie — "a fire of joy" or a bonfire — in my eyes. The occasion was the first spring-like weather of 2009. 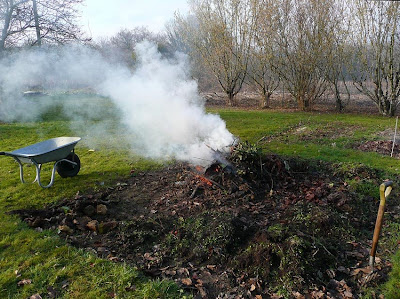 Getting a fire going in a pile of leaves and twigs
We've never before lived in a place where we could have a fire outdoors, other than in a barbecue grill. The neighbors on Capitol Hill in Washington DC, in Silicon Valley, or in San Francisco would have been up in arms. So an outdoor fire, even a little one, is still a big deal to me. It's good entertainment. Ah, life in the country! Everybody around here has a feu de jardin — a fire in the garden — a couple of times a year. 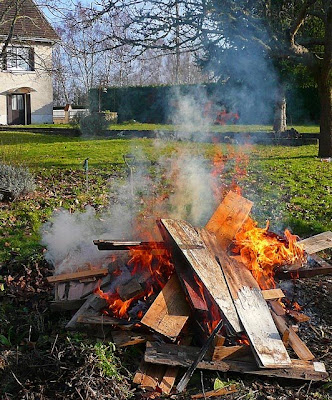 Throw on some boards when it flames up.
When we moved into this house, the garage and the garden shed were full of a load of boards, short and long, and some old wooden storage cabinets that were rickety and useless. We stacked a lot of that stuff out behind the garden shed, telling ourselves we would haul it all to the déchetterie, the recycling center, one day soon. 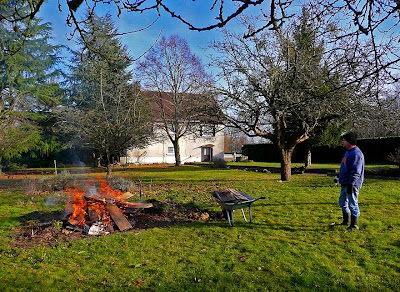 Now it's going good.
Five years later, we realized all those big long boards and old cabinets were still out there, disintegrating in the weather and growing mold and fungi. Late last summer, we dragged them out to burn them. We realized that the long boards were far too long to try to haul to the dump in our little Peugeot, so burning was the only way. But the weather didn't cooperate. Soon the fall rains started. 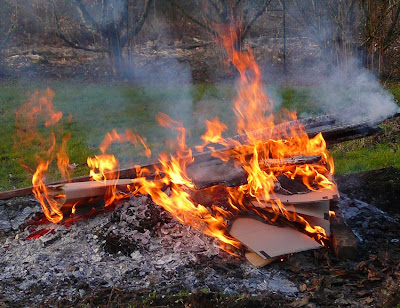 Stand back. It's pretty hot.
So we covered all the old wood with a big tarp as best we could to keep it dry, and we waited for an opportunity. Well, it finally came day before yesterday. The day was chilly but sunny. It hadn't rained in a week, so the ground wasn't too mushy. 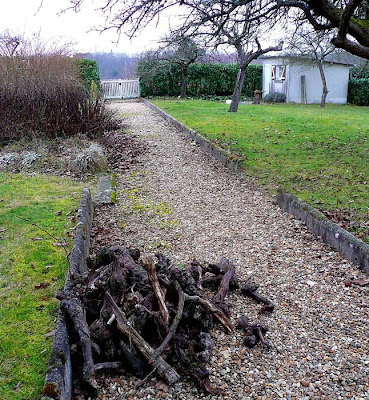 As the fire burned, I gathered up all the grape vine trunks
that Callie has collected out in the vineyard this winter and
scattered around the back yard. This will be firewood for
the barbecue grill in summer or the wood burner in autumn.
Walt got a fire going in a pile of leaves. Then we started throwing some big pieces of cardboard, some pine cones and dead leaves we gathered up, and the boards on it. And we succeeded in burning up about 90% of what we wanted to burn. We use one of our vegetable garden plots as a place to burn yard waste and whatever else. That way, the ashes are there onto the ground, ready to be tilled in and become fertilizer. 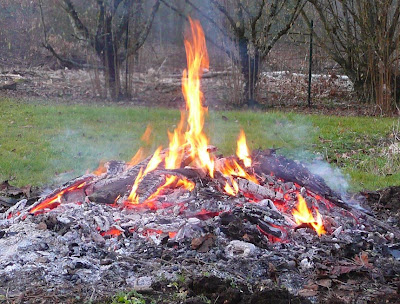 Fire's almost done and all the old boards are gone.
It was pleasant to be outdoors all afternoon and it is really starting to feel like spring now, when the sun comes out. Of course, winter can come roaring back in February and March. In fact, there are predictions of snow in Saint-Aignan by Monday morning. We'll see.
Posted by Ken Broadhurst at 07:10