The kind of crêpes we made yesterday probably don't even qualify as the kind you are supposed to make for the French Chandeleur celebration. Those would be dessert-style crêpes made with white wheat flour — the kind you would use to make Crêpes Suzette. 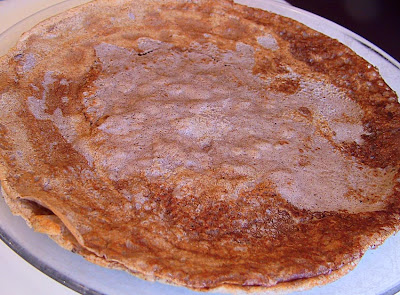 Une galette de sarrasin, or crêpe de blé noir —
a French buckwheat pancake used in savory dishes
What we made was buckwheat crêpes or, in French, crêpes de sarrasin. Farine de sarrasin, also called farine de blé noir ("flour from black wheat), is made from a plant that is not really a grain or a grass. Flour made from it contains no gluten, and it has a slight mushroom-like flavor. 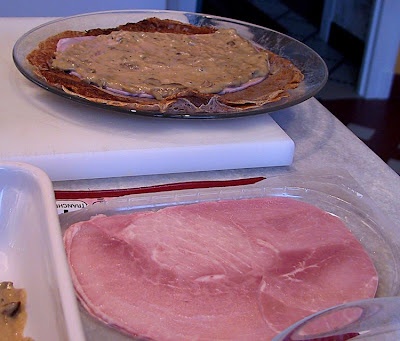 Buckwheat pancakes with ham and mushroom sauce
Buckwheat was imported into France from Asia centuries ago. It gows well in Brittany, and buckwheat flour is used especially there to make savory (as opposed to sweet) pancakes. They are called crêpes but also galettes, which can describe any sort of flat cake. All French pancakes are unleavened and are made very thin and eggy. They are easy to fold or roll up, like Mexican tortillas. 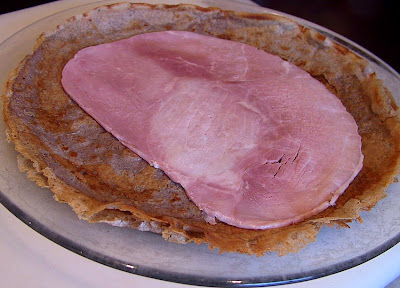 Put a pancake or two on a plate and lay a slice of ham over them.
Spread a thick mushroom or cream sauce over the ham slice.
Usually, buckwheat pancakes contain a certain amount of wheat flour along with the buckwheat flour. The gluten in the wheat flour makes the pancakes hold together better. If you are allergic to gluten, you can however use buckwheat flour exclusively and maybe put in an extra egg. 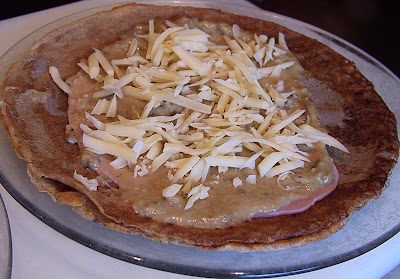 Sprinkle grated cheese over the mushroom sauce.
French recipes for buckwheat pancake batter are all over the map when it comes to proportions of wheat and buckwheat flours to use. The one in a classic home cookbook by author Ginette Mathiot (Je Sais Cuisiner, 1970) calls for 200 grams of buckwheat flour and 90 grams of wheat flour. That's a two-to-one ratio. 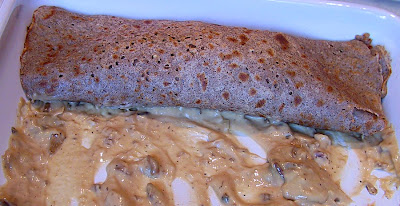 Arrange the rolled-up crêpes over a layer of sauce in a baking pan.
After you've assembled a ham, sauce, and cheese pancake, roll it up into a log, or fold it into a triangle. Put a thin layer of the mushroom or cream sauce on the bottom of a baking dish and arrange the pancakes on it. Sprinkle any remaining grated cheese over the top. Of course, you could also make these without the ham. 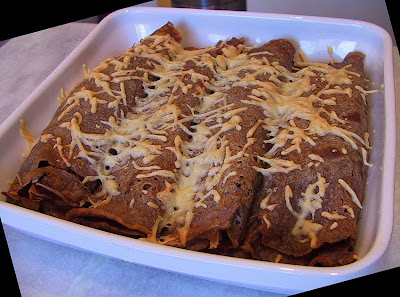 Baked filled buckwheat pancakes
Bake the dish in a 175º (350ºF) oven for about 20 minutes, so that the cheese inside melts and the mushroom sauce gets good and hot. We had ours with poached eggs, but if you have cream sauce left that would be good instead, spooned over the baked pancakes at the table.

* Here's a translation of Ginette Mathiot's recipe. As usual, ingredients are measured by weight, not volume.

Put the two flours in a bowl. Blend in the egg and milk. If the batter is too thick, add water to thin it. Oil the skillet and get it hot. Pour in a small quantity of batter the spread it to cover the bottom of the pan. Let it cook 2 mins. on each side. Put a lump of butter on the cooked pancake and fold or roll it up for serving.

French-style pancake batter should be very liquid and it should just kind of film the bottom of the skillet you cook it in. I used this Flour Amounts Calculator on the Internet to determine American measurements, which are very approximate.
Posted by Ken Broadhurst at 08:01