In years past, on mornings when there were hunters out in the vineyard near our house, I would put the dog in the car and drive over to Noyers-sur-Cher for a morning walk along the canal. Noyers is the town directly across the river from Saint-Aignan. 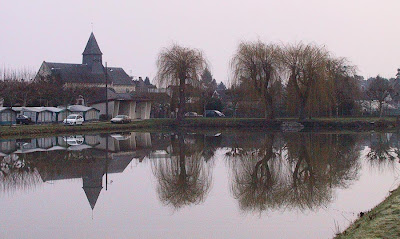 The church at Noyers-sur-Cher reflected
in the waters of the Canal du Berry.
The pictures here are ones I took the morning of February 6, 2005, on one such walk. It shows typical February weather here: gray, chilly, and windless. Today, three years later, is that kind of day. Rain is supposed to begin falling by noon.

The old Canal du Berry ends at Noyers-sur-Cher, where it dumps into the Cher River. The canal parallels the river for 250 km/150 mi., running northwest from the big town of Montluçon to the village of Noyers. It is no longer used for boat traffic, but people do fish in it. 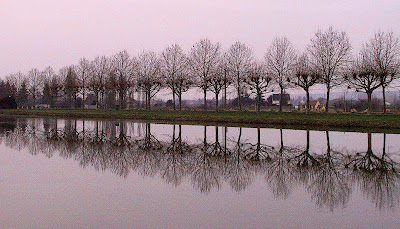 Trees in a line along the canal
Windless weather makes for good reflections when you are on the banks of a canal full of very still water. I enjoyed those walks over at Noyers, despite the cold and damp. I never go over there for walks any more — not since we've realized that we can take the dog out into the vineyard even on hunting days if we go early enough. The hunters don't arrive until 9:00 a.m. — they are so punctual you'd think they were punching a time clock. 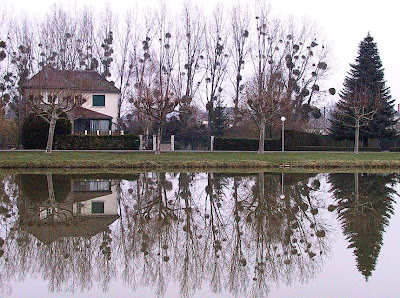 A lot of mistletoe in the trees along the canal
Local people will tell you about the three old provinces that come together here at Saint-Aignan. Saint-Aignan itself is in the Berry province, while Noyers in in the Orléanais. Meanwhile, the village we live in, two miles from Saint-Aignan, is in the Touraine. 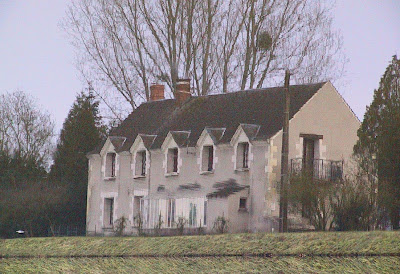 It's hard to tell if this is a real house or just its reflection.
The old provinces have no legal or administrative significance any more. At the time of the French Revolution, more than 200 years ago, they were replaced by the administrative units known as départements. Nowadays the whole area is in the département called the Loir-et-Cher. And under gray skies that threaten to give us a cold rain.

P.S. Now that it's light enough to see outside,
I can report that a light snow is falling.
Posted by Ken Broadhurst at 07:41