No, not the Microsoft operating system. I'm talking about the windows in your house. On a blog I read called Separated by a Common Language, the blogger recently posted a topic that has so far generated more than 50 comments. It was about windows, bathrooms, and butter.

Now "lynneguist"— the blogger— lives in England and is actually a linguist. She's an American from upstate New York (like Walt) who was a graduate student at the University of Illinois in Urbana-Champaign (like me). I'll skip what she recently had to say about bathrooms and butter* in England and get right to the windows. 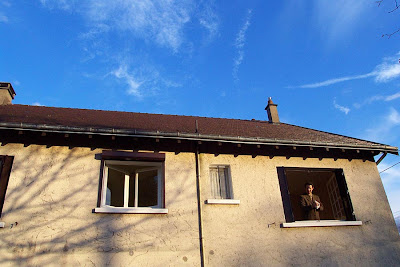 French windows open inward and have shutters
but no screens. The ones in our house are big
in proportion to the size of the rooms.
Lynneguist's blog is about differences between British and American English. The topic she posted about windows started with a language difference between U.S. and British English: in the United Kingdom, some spell the word "sill" as "cill" — so it might be "the window cill." Then she mentioned that she really misses having screens on her windows in England. That brought on a lot of comments.

We don't have window screens in France either. There's really no need for them. It is seldom hot enough for us to want to leave the windows wide open, and even on those occasions when we do leave them open there aren't enough bugs for to feel the need to have window screens.

It was the same in San Francisco, by the way. There, we had new windows put in at our house, and they came with screens. We took them out because it was wintertime and then never put them in, because they obscured the view and they just weren't necessary. It was almost never warm enough in San Francisco to leave the windows open anyway. We were lucky if there were 10 hot days in a year. There just weren't many flying insects.

A while back I read a blog (or was it an e-mail to me because of my blog?) from some people who were thinking of selling their house in the U.S. and buying one in Normandy. They were worried that the house in Normandy didn't have window screens and that their cat would get out if they left the windows open.

I told them not to worry — it would never really be warm enough in Normandy for them to feel the need to keep the windows open. Besides, it really isn't practical to leave French windows open, because they open into the room and just get in the way. And don't forget that, once again, there aren't really any bugs in Normandy — at least not flying insects. It's too cold there.

The question of windows screens is a little like the question of air conditioning. After the famous 2003 canicule in France — the great heat wave during which thousands of older people died of heat exhaustion — some people here started having air-conditioning units installed in their houses and apartments. The reason vulnerable people died in such numbers in 2003 was that the heat wave was so completely unusual. 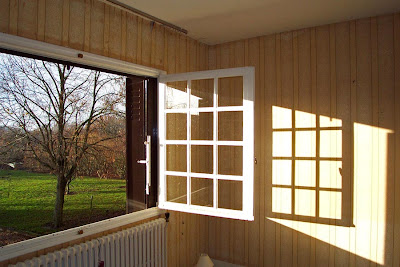 French windows sweep across a big part of the room when you
open them. It might seem nice to have a big clear opening,
but that's a minor advantage in this climate.
One of the people who had AC put in was the woman (soon to be 82 years old) who sold us our house in Saint-Aignan. She moved into an apartment in Tours in 2004. At her daughter's urging, she decided to have an air-conditioning unit installed. That required punching a hole in an exterior wall of the building. It took her a year to get permission from the other apartment owners to have that kind of work done. But finally it was, and the air conditioner was put it.

At last report, she said she had never once used it. The summers of 2005 and 2006 were warm and pleasant, but we had few if any really hot days. The summers of 2007 and 2008 were damp and ... well, chilly might be an exaggeration, but let's just say nobody needed air conditioning, by any stretch of the imagination.

Back in the 1990s, when I told friends and cousins in North Carolina that we didn't have air conditioning in our house in San Francisco, I could tell they felt sorry for me. They were under the impression that I made a good living and lived in a decent house. And a decent house has AC.

In other parts of California — Silicon Valley, Sacramento, and the southern part of the state — the weather is a lot hotter and people do have screens on their windows and sliding-glass doors. And some have AC.

A lot of Americans who want to come and spend a week or two in Paris or elsewhere in northern France in the summertime think air conditioning is something they will really need in a rental apartment or hotel room. Well, they might need AC while they're here, but it is really pretty unlikely. However rare, heat waves do occur once in a while in France.

In Paris, the reality is that you are just as likely to need to turn the heat on in July or August as you are to need AC. That's the way it was in San Francisco, too, where we used the heat about 350 days a year — especially in July and August, when it was chilly and foggy. And as for Paris, a friend of ours who has an apartment there keeps his heat on all through June, July, and August most summers.

Once Walt and I spent a few days in Paris on July 4th weekend. It must have been in 2000. It was hot, and our hotel room had only one window, so there was no cross-ventilation. And no AC. It was near the Eiffel Tower, and there were mosquitoes in the neighborhood. There are ponds under the tower, and I assume mosquitoes were breeding in them. So leaving the window open was not a good idea because of that, not to mention noise. We really could have used AC on that trip.

Here in Saint-Aignan, when we had new bedroom, bathroom, and kitchen windows put in at our house, I asked the window contractor about putting in screens. We had just spent our first summer here, and it had been the year of the Great Heat Wave, so we thought we might need screens in the summertime in this climate.

The window contractor looked chagrined when I mentioned screens. Ce sera trop compliqué, he said — very complicated. I think he just feared they would be complicated to install, but he probably didn't know, never having put window screens in before.

I let the idea drop, because I'd spent enough time in Paris and in rental houses and hotels all around France to know that window screens are pretty much non-existent. In fact, I don't know if I've ever seen a French house or apartment that had them. Or air conditioning either, until very recently. 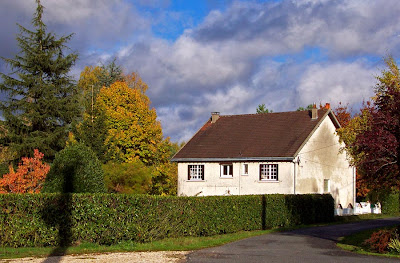 This was the back of the house in 2003,
when it still had the old divided-light windows.
Nearly all houses and apartments in France have working window shutters, by the way. Closing them at night and opening them in the morning is quite a ritual for most people. I've heard it called la corvée des volets — "the shutter chore."

The window guy here in Saint-Aignan also didn't think it was a good idea to install sliding windows, I learned later. When he came back a year later to do some more work for us, I told him how much we liked the double-glazed sliders he had installed in the bedrooms and main bathroom. He was surprised and said he had been sure we would not like them. He didn't know that they are pretty much standard-issue in California houses.

Here in France, windows open inward. In a house like ours, where the bedrooms are not very big and the window openings are huge, proportionally, having French windows can be a big problem. You can't put anything in front of them. They sweep across most of the room when you open them. The same was true of our old kitchen window, which we also had replaced with a slider. Here's a topic about that.

That's why the previous owner had told me one day that she thought the windows in this house were too big for the rooms. It took me a while to figure out what she was talking about. I thought the big windows were one of the house's most attractive features. The views are nice, and so is the light. But those big wood-and-glass panels that open into the room, sweeping across most of the available space, were too big, and not practical. 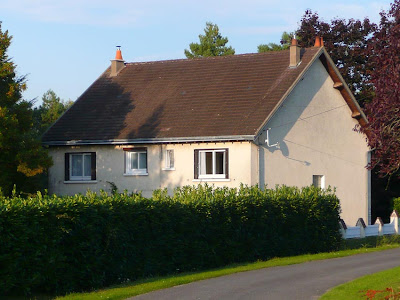 And here's a more recent picture of the back of the house
with the plain new windows we had installed.
When we ordered a new window for the kitchen, I struggled with the decision to have or not to have "divided lights" or just plain glass, and wrote about it here and here. I decided against divided lights. In the bedrooms we had already changed the style, and it is much easier to clean an undivided window than to clean all those little pains... er, panes of glass in divided-light windows. So our kitchen window is different from all the other windows in the front of the house. I doubt that the neighbors or passers-by care at all.

When and if we ever sell this house, I wonder if potential buyers will be put off by our non-standard window choices. Unless the climate changes dramatically, I'm sure they won't be worried about the absence of window screens.

* By the way, lynneguist's comments about bathrooms had to do with
the lack of electrical outlets in bathrooms in England.
And about butter she lamented the fact that the wrappers
it comes in in England do not have graduations
for tablespoons or cups.
Posted by Ken Broadhurst at 08:05