I think that was that famous French perfume they used to sell in America, wasn't it? "Evening in Paris" — I used to joke that it cost a quarter a quart. My mother just said she found an Evening in Paris bottle under her house one time, in the crawl space. And right next to it was an old poison bottle with a skull and crossbones on it. I think whoever left them there was trying everything he could think of to kill the vermin that lived under there.

Anyway, that is irrelevant to this post. I'm in North Carolina for a couple of weeks, but I didn't do much of interest yesterday, my first day here. I didn't take any pictures. Now they tell us that a steady rain is supposed to fall all day today, so chances are I won't take pictures today either. Temperature outside is 48ºF/9ºC. 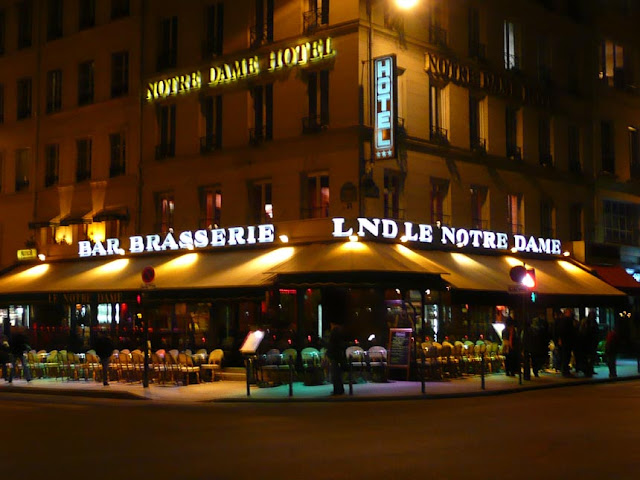 On Sunday, I spent the evening in Paris on my way to America. From Saint-Aignan, it's hard to take the train in the morning to get to CDG airport to catch an airplane leaving at mid-day. My plane left at 1:00 p.m. and that meant being at Roissy by about 11:00. My only real choice, to reduce the stress of worrying about missing the plane and losing all that money, was to go up to Paris the night before and spend the night in a hotel.

Paris for the evening. Poor me, right? 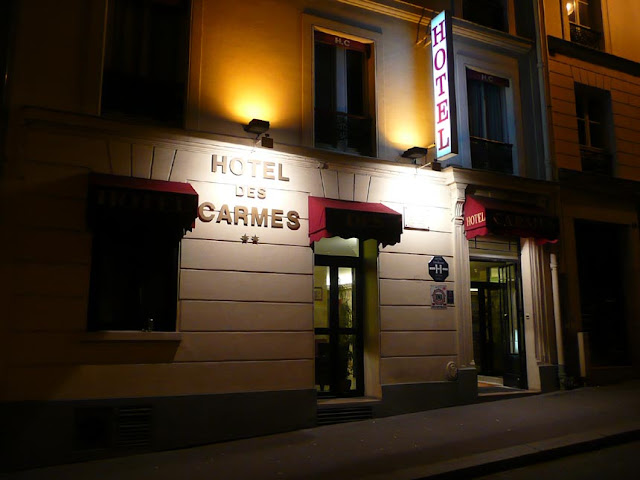 I stayed at the Hôtel des Carmes, which is just off the Rue des Ecoles and just down the hill from the Panthéon. Friends of ours have been staying there for years, and I stayed once before, back in 2007. The price is right for central Paris — 82€ a night for a single room on the courtyard. Very quiet. The room I had had recently been redone and was very comfortable. Phone, flat-panel TV, nice little bathroom with a good shower.

I could even walk from the Gare d'Austerlitz, where my train from Blois pulled in, to the hotel, pulling my suitcase behind me. It took about half an hour. The weather was chilly, clear, and crisp. 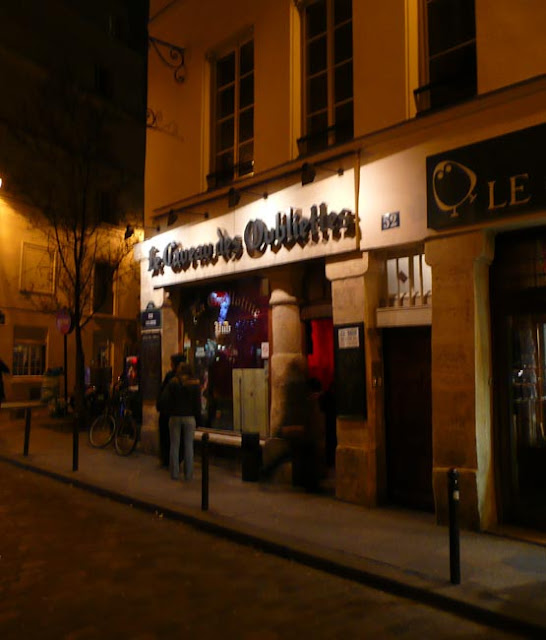 I wandered through the nearby streets and
came upon the Caveau des Oubliettes...

After I got settled in, I went for a walk to see about getting some dinner. I walked by a couscous restaurant on the Rue du Sommerard, over nearly nextdoor to the Cluny museum. It looked good, and I had read some good reviews of the place, called Jaafar. People said it was a really good value for the money. The little restaurant only has eight 4-person tables.

When I walked by, I notice that there were two people at each of the 4-person tables. I didn't really want to sit with other people, and I thought couscous might be a little heavy in my stomach the next morning, when I was going to take the train to the airport and then catch my flight. 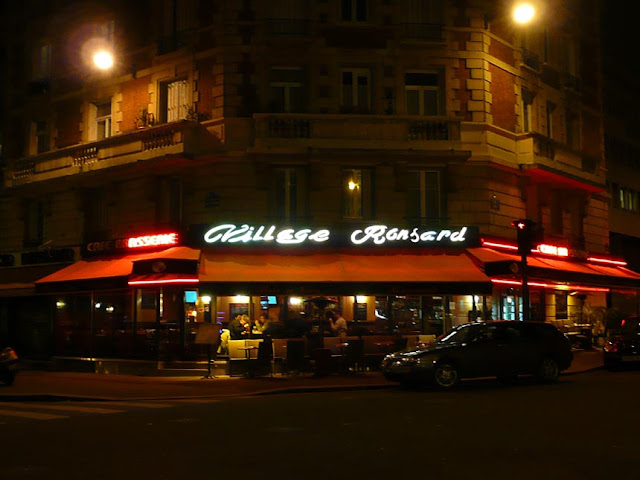 So I walked around a little more. There was a French place on the rue des Ecoles that was a definite possibility. It was a little expensive, but it was open, and a lot of places are closed on Sundays. And then there was a café/brasserie down on the Place Maubert called the Village Ronsard. I had eaten a light supper there once before, and it seemed fine. It was open, and I liked the menu. It's only the equivalent of a city block from the Hôtel des Carmes.

So I went there. There were a few other customers. I ordered a fairly ordinary meal — a salad of tomatoes and mozzarella (even though it is not at all tomato season), and then a pavé de rumsteak - frites — a thick cut of beefsteak with french fries. Well, it was all delicious, in that inexpensive French café kind of way. 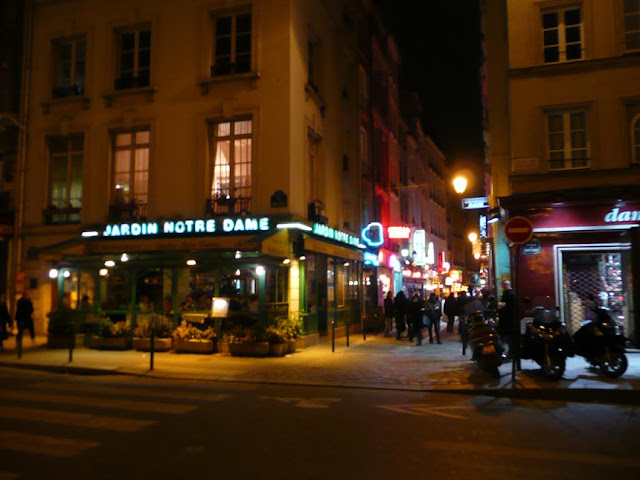 The famous Rue de La Huchette in the Latin Quarter

There were some people from England at another table. They were in their late 20s or early 30s, I'd estimate, and two of them ordered beef as well. One asked for the same steak I got, and she wanted it « bien bien bien bien cuit », she said. That's basically what we would call "cremated" here in eastern North Carolina.

Another ordered steak tartare. If you know what that is, you'll be surprised to hear that when the waiter brought is plate, he sent it back and asked if they could cook it for him! I heard him tell his companions that he would have eaten it except that he could see some blood in the meat. What did he expect when he ordered raw beef?

Le Village Ronsard attracted me partly because of the name. Ronsard was the great Renaissance poet who lived in the Touraine, where we live now. I had a glass of Sauvignon Blanc wine from Quincy, which is a vineyard about 35 miles east of Saint-Aignan.

Place Maubert is also the area where I stayed the very first time I was in Paris, back in late 1969 and early 1970. I used to go to a fleabag hotel called Le Pierwige, not 30 steps from Le Village Ronsard café. I have a sentimental attachment to the neighborhood. I turned 21 in 1970. After dinner, I took a walk over to Notre Dame, only 10 minutes away, to soak up the ambience. There was a definite chill in the air. I had a heavy coat but no hat or gloves, so I didn't stay out too long. Just long enough to snap a few pictures around the neighborhood, which I include here.

It turned out I should have ordered my steak "cremated" as well, like the British woman. It was very rare, and I'm sure it was the reason that I felt pretty queasy all during the 24 hours it took me to get from Paris to coastal North Carolina. I'm still in recovery mode — jet-lagged and digestively fragile.
Posted by Ken Broadhurst at 11:54