Our friend John H. in California, who grew up in New Orleans, left a comment here a few days ago and gave us the address of a web site called Nola Cuisine (link). I took a look around the site and got this recipe for Chicken and Shrimp Jambalaya (link). Walt had been talking about making jambalaya for a few weeks, actually. 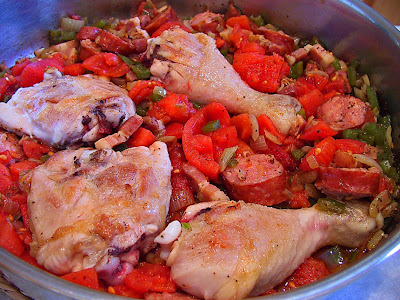 Everything has been sautéed and now it's ready for the oven.
Well, it's really good. It's kind a Louisiana version of the Spanish dish called paëlla (French spelling?) — rice, smoked sausage, chicken shrimp, and aromatics including onions, celery, and green bell pepper. Not to mention spices and herbs. 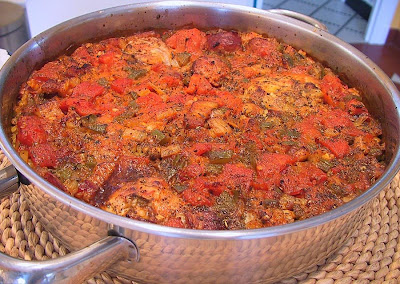 Here's what it looks like when it comes out of the oven.
We basically followed the recipe. I substituted French Montbéliard smoked sausage for the Louisiana andouille sausage, because that's what we can get. And I substituted thick-sliced poitrine fumée for the tasso ham. We had chicken, of course, and shrimp. I used round (short-grain) rice and canned tomatoes (it's not the season for fresh tomatoes). 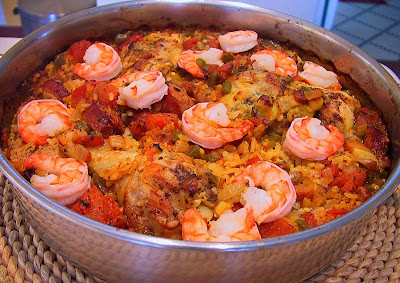 And here it is after the final cooking, with shrimp on top
and ready to be taken to the table.
It doesn't get much better than this. Don't skimp on the cayenne pepper, and serve Tabasco or Chipotle Tabasco sauce at the table.
Posted by Ken Broadhurst at 06:44