This duck is cooked

Yesterday I forgot to mention that those duck breast filets from the French Sud-Ouest carry an IGP label. It's on the ad. IGP is a European label that means Indication Géographique Protégée. It is awarded to products associated with particular geographic areas, and is related to the French Label Rouge and Appellation d'Origine Contrôlée (A.O.C.) labeling standards. 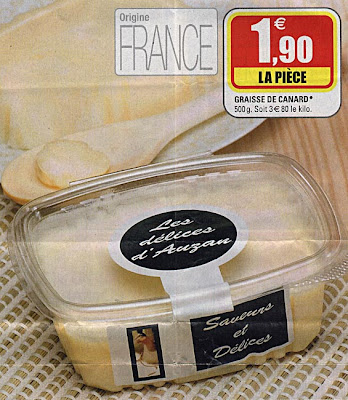 Rendered duck fat for cooking and seasoning other foods
So just when you thought that was more duck that you could imagine, you turn the page in the supermarket advertising flyer and come upon a range of cooked duck products that are also being featured this week. The first is rendered duck fat, which is great for cooking potatoes or duck or chicken, and is good for seasoning beans, greens, and other cooked vegetables. 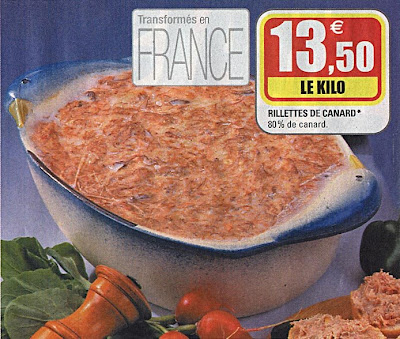 Rillettes de canard — potted duck to spread on bread or toast
One way to use duck fat, probably combined with pork fat, is to make rillettes, or potted meat. Rillettes can be made from pork, duck, goose, rabbit, or chicken. To make them, you cook lean meat in fat and liquid until the meat starts to fall apart. You shred it with forks or your fingers and let it cool in as much fat as you want to leave in it. It's not pâté, exactly, but you eat it the way you eat pâté, on bread, toast, or crackers. 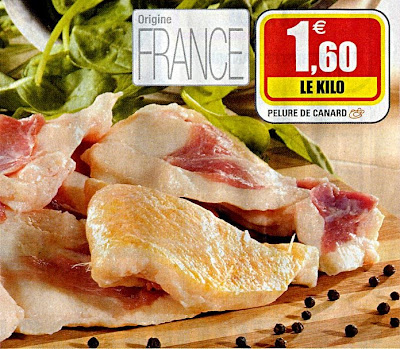 Duck pelures, or peelings, which you can render to make duck fat
If you need duck fat and want to make your own, you can buy what they call duck "peelings" — pieces of duck skin with a layer of fat of fat attached. You can cook them down in a saucepan with a little water to melt the fat. And you can make cracklings out of the skin. 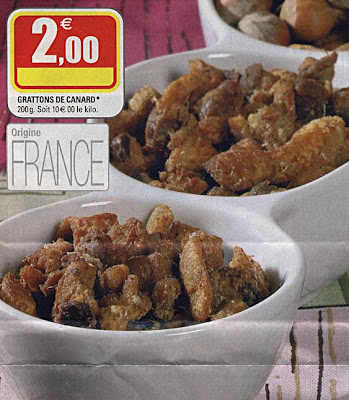 Cracklings
Speaking of cracklings, here are some. They are duck skin cooked in fat or in the over until crispy. The dictionary lists grattons as a regional word and says the grattons are a little like rillons, which are chunks of slow-cooked pork. 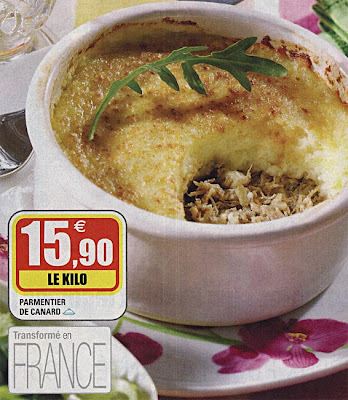 Parmentier, a kind of shepherd's pie
Once you've slow-cooked a duck in its own fat, you have made confit de canard. One way to use the duck confit is to strip the meat of the bones after it has cooled and shred it. Then you can used it the way you would use ground beef or lamb to make a kind of shepherd's pie. Or you can just buy it, parmentier de canard, already made for you. Antoine Parmentier was the agronomist who introduced potatoes into the French diet a few hundred years ago — hence the name of the dish. 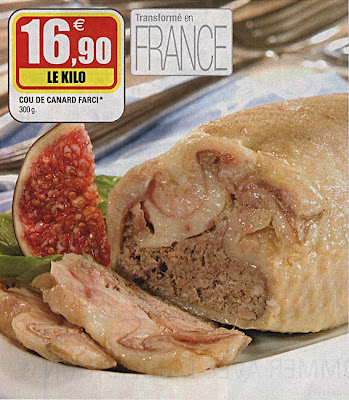 A stuffed duck's neck
Finally, what about a stuffed duck's neck? You remove the neck itself, including the bones of course, from the bird's neck skin and then you stuff the skin with ground duck or pork and aromatics. You tie off the ends, making a kind of sausage, and poach it in duck or chicken broth. Bon appétit !
Posted by Ken Broadhurst at 14:57