On Saturday we made Oysters Rockefeller. It was on the list — the list of foods and dishes that we want to remember to make and enjoy eating one day soon, when we get around to it. Still on the list are clams casino, for example, along with brandade de morue, alouettes sans tête, and British steak and kidney pie. 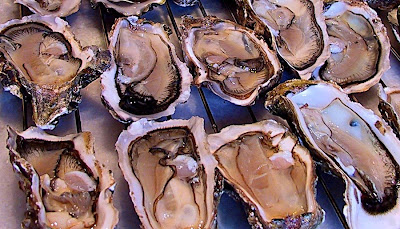 Fines de claire no. 3 from the Ile d'Oléron
So it was time to make Oysters Rockefeller. We went to the market in Montrichard on Friday and bought two dozen « fines de claire » oysters, no. 3 in size (medium), from a man who brings them up here from the little fishing port called La Cotinière on the Ile d'Oléron. Fines de claire are oysters that have been fattened in salt ponds for at least a month before being taken to market. The man was selling them for €3.90 a dozen. 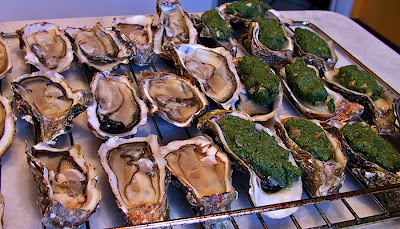 Stuff the oysters with a spinach mixture.
I looked around on the Internet for recipes and found several (here's one). I also looked in the Joy of Cooking and in one of Paul Prudhomme's Louisiana cookbooks. Prudhomme didn't have a recipe, but Joy did. They say Oysters Rockefeller was first concocted at the famous New Orleans restaurant called Antoine's, but that restaurant keeps its recipe a secret. 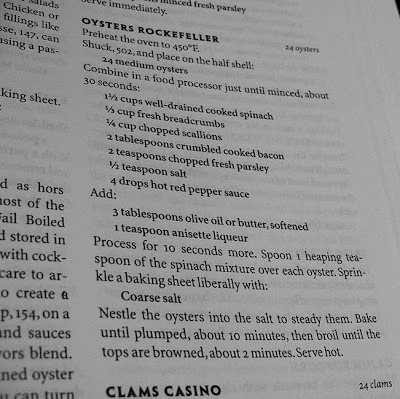 Here's the Joy of Cooking recipe.
Most of the recipes call for stuffing raw oysters on the half-shell with a mixture of spinach, shallots or green onions, bread crumbs, butter, parsley, crumbled bacon, and a little melted butter, Tabasco sauce, and Pastis (the anise-flavored alcohol). Some say to add some watercress and ground fennel seeds, and some even say don't use spinach at all, just parsley and other fresh herbs. Some reports say Antoine's version never used spinach.

You buzz the spinach and other ingredients up in a food processor until you have a thick, finely chopped mixture that is almost a paste. You open the oysters and lay them out in their bottom shell on a rack or on a layer of coarse salt on a baking sheet (so they won't fall over). And then you bake them for about 10 minutes in a 450ºF/230ºC oven. 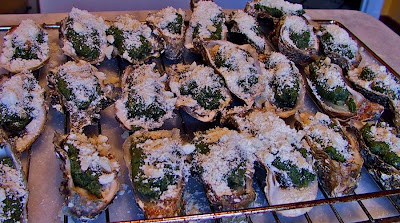 Sprinkle grated cheese over the top and put them in a hot oven.
Oh, another optional ingredient is grated parmesan, which you sprinkle on top of the stuffed oysters before putting them in the oven. We had just bought some Parmigiano Reggiano and some Pecorino Romano at Intermarché up in Contres (it was part of a special sale of Italian products in that supermarket chain last week), so we used a blend of those on our oysters. 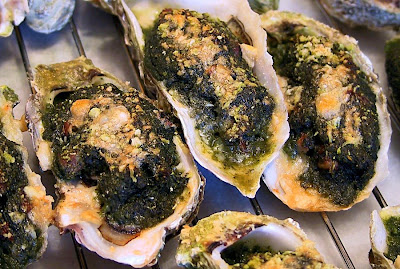 Oysters Rockefeller — the Saint-Aignan version
So the pictures show the result. I had never made Oysters Rockefeller before, and I'm not sure I will ever make them again. I won't say it was a waste of good oysters — but on some level, that's what I was thinking as we ate them. Walt said he thought this was a way for people who don't really like oysters to say that they eat them.

The taste is pretty much obliterated by the cheese, pastis, and hot-pepper sauce. I used frozen spinach, but I don't think fresh would have made much difference, considering all the strong flavors in the mixture. I think I overdid the bacon too — what I used was thick sliced poitrine fumée, and it was very salty. I should have blanched it before I grilled and then diced it.

So here I am thinking of ways to improve a recipe I just said I might never try again.

Anyway, give me a raw oyster on the half-shell any day. With just a few drops of lemon juice or shallot vinegar, some black pepper, and some bread and butter. And of course a good glass of Muscadet wine. That's a lot less trouble to make — either way, you have to shuck the oysters, and that's the hardest part — and it's more delicious if you like raw oysters.
Posted by Ken Broadhurst at 07:27