It's crêpe day in France, La Chandeleur. That's Candlemas Day in English. The origin of the feast day is supposedly the presentation of baby Jesus at the temple by Joseph and Mary all those centuries ago. 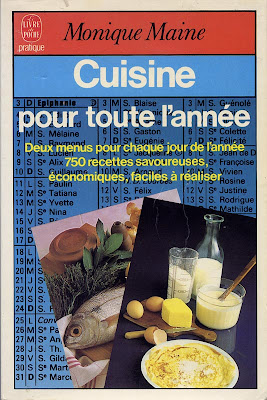 There's picture of a crêpe
right on the cover of the cookbook.
For some reason, people in France eat crêpes — little thin pancakes — on this day. There's a whole ritual. You are supposed to hold a gold coin in one hand as you cook the pancake, and then flip the pancake in the pan to turn it over. If you are successful, you and your family will be prosperous for the coming year.

If, however, you manage to throw the pancake out of the pan when you try to flip it, you are supposed to leave it where it lands, undisturbed. For a year! If you move it, you risk bad luck for the rest of the year.

Around here, this would not be a problem. The crêpe would have to be stuck to the ceiling for Callie not to find it and gobble it up in a flash.

Another legend says you are supposed to put the first crêpe you make (which is never a very nice one, because they pan hasn't heated up thorougly and evenly yet) in a kitchen cabinet and keep it for a year. If you do that, you will have a good harvest in the fall. Maybe we should try it, given our sad vegetable gardens and poor harvests of the past two years.

Here's a recipe for crêpes from one of the handiest cookbooks I have. It's called Cuisine pour toute l'année, by Monique Maine (1969). Make them, any day. They are very simple to do, and you can put sugar and lemon, jam, honey, chocolate, or other fillings in them. 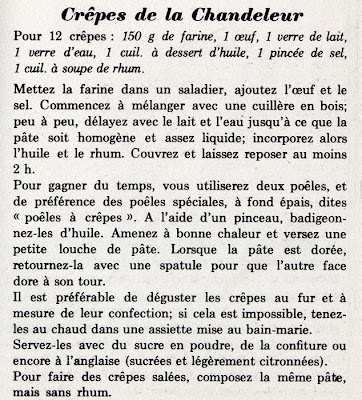 I just read on French Wikipedia that in Mexico people eat tamales on Candlemas Day. That sounds good too. In the U.S., today is Groundhog Day. Do groundhogs eat crêpes? I bet they would if they got the chance.

Here's a translation of the recipe:

Put the flour in a bowl and add the egg and salt. Start stirring with a wooden spoon and gradually blend in the milk and water until you have a smooth, fairly liquid batter. Then stir in the oil and rum. Cover the bowl and let the batter rest for two hours.

To speed things up, use two pans, preferably specially designed crêpe pans. Brush the interior of the pans with oil. Get them good and hot and then put a ladleful of batter in each pan. When the pancake is browned on one side, flip it over with a spatula and brown the other side.

It's best to eat the crêpes as you make them, without waiting. If that's not possible, keep them warm on a plate over a pan of simmering water.

Serve the pancakes with sugar, jam, or with sugar and a squirt of lemon juice.

To make savory crêpes, make the same batter but omit the rum.

What the recipe doesn't tell you is that you need to swirl the batter around in the pan before it sets up so that the whole inside of the pan is covered in a thin layer. Use a non-stick pan.

Make the crêpes very thin. You can put them on a plate, one right on top of the other, and they won't stick together. Keep them warm, covered, in the oven.

And when you serve them, sprinkle on sugar or spread on a thin layer of jam and then either fold the pancakes or roll them up.
Posted by Ken Broadhurst at 09:51