Yes, it's zucchini season again. The tomatoes have been long to ripen (they're off to a good start now and the weather is hot) and the eggplant aren't really overwhelming us, but the green and yellow summer squash are like Old Faithful. They are gigantic before you can get out there to pick them. The green beans are amazing this year too. Walt picked what must be close to a bushel of them yesterday. 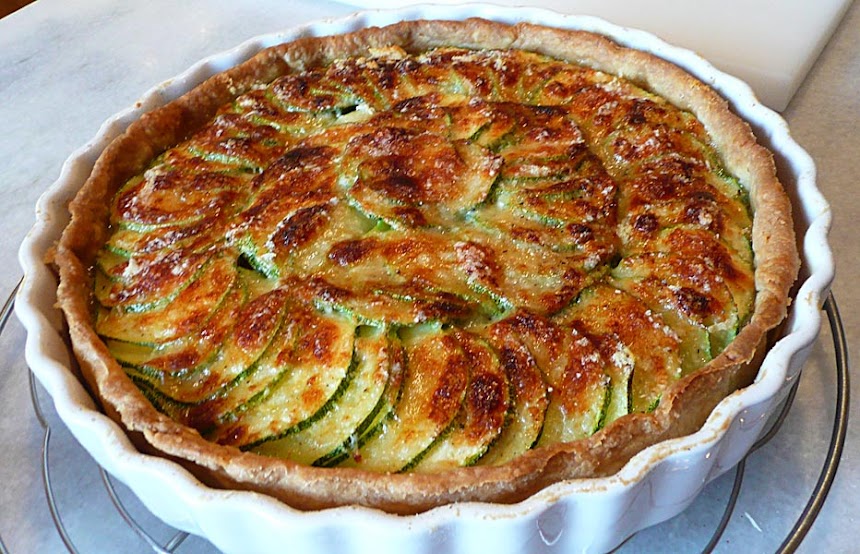 Onions, sausage slices, zucchini, and cheese in a pie
But zucchinis. You can blanch and freeze just so many. You can also grate them raw and freeze them that way for making soup or quiches later. So what about a zucchini and sausage tart? I saw a recipe for one somewhere, and we adapted it to our own methods, preferences, and ingredients. Here it is. 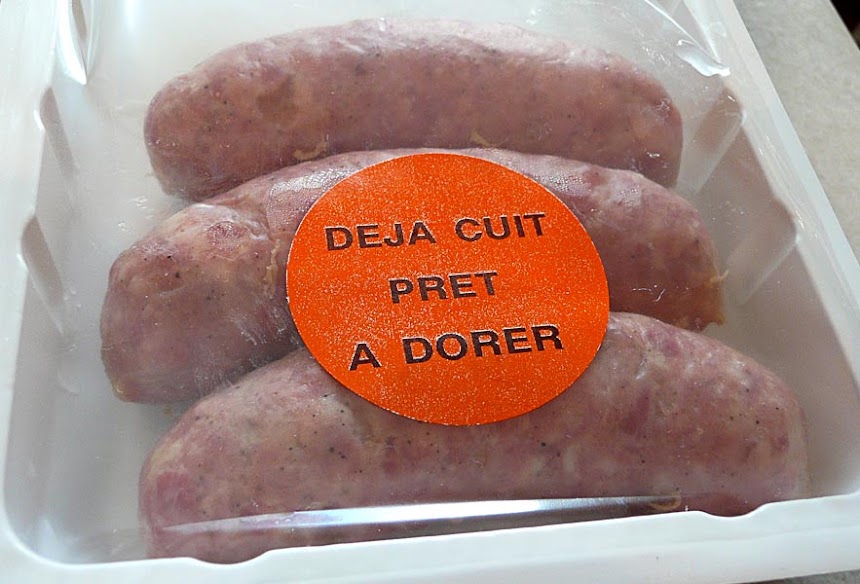 I found these "already cooked, ready to brown" locally made, very
lean sausages from the Sologne at the supermarket a few days earlier.
It's pretty simple if you have a pie crust. You can make one or you can buy one. Then you have to "blind bake" it — bake just the crust itself in a pan, with foil or parchment paper laid over the crust and with some dried beans or rice or pie weights on top to hold the pastry down and keep bubbles from forming. 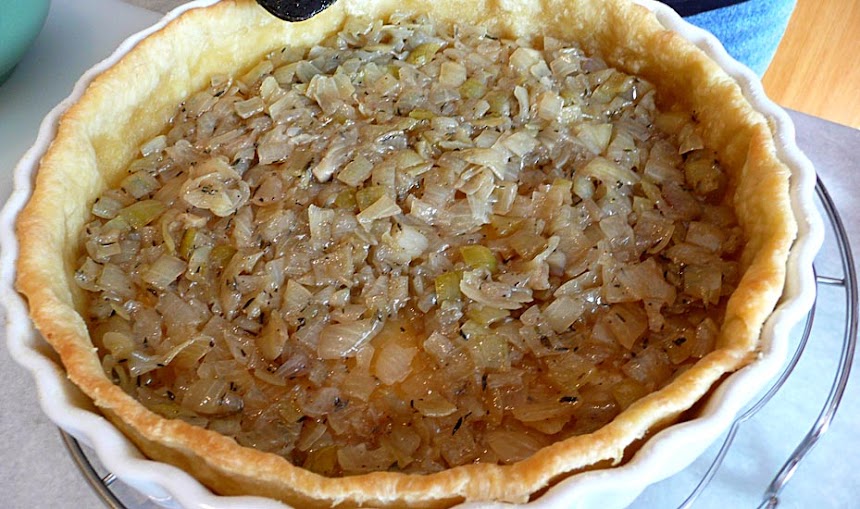 Slow-cooked onions on the bottom of the pie shell
Meanwhile, you chop up a couple of big onions — you need two or even three cups, chopped, I'd say — and cook them on low heat in olive oil or butter or whatever fat you prefer. Salt and pepper them. They need to be at least translucent or even slightly golden. You can always add a glug of white wine to the pan if you want. I did, and then I stuck in a bay leaf, put on the cover, and let them cook for 30 to 45 minutes on very low heat. 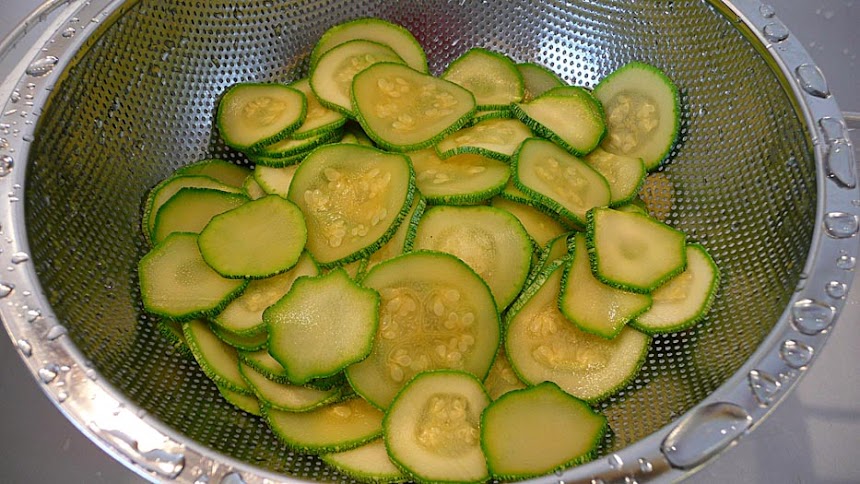 Zucchinis sliced thin on the mandoline
and blanched for a minute or two.
And while the onions are cooking and the crust is baking, slice up some sausage, pre-cooked, and some zucchini. Walt cut our zucchini using a mandolin, so the slices were very thin and very uniform. 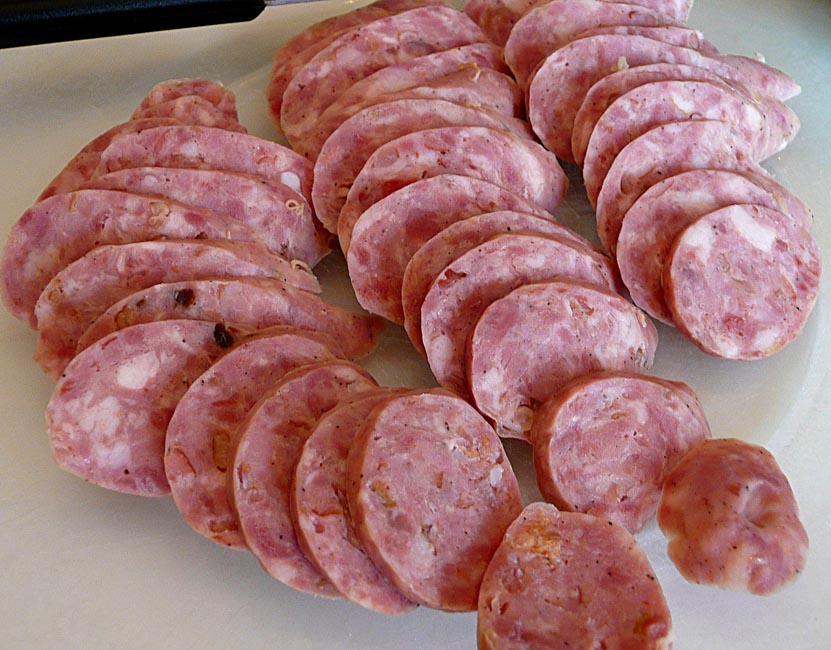 Pre-cooked sausages all sliced up for the pie
The zucchini slices need to be blanched. That is, put them in boiling water for just a minute or two, with some salt, to soften them. Then scoop them out and put them into some very cold water to stop the cooking. Drain them. 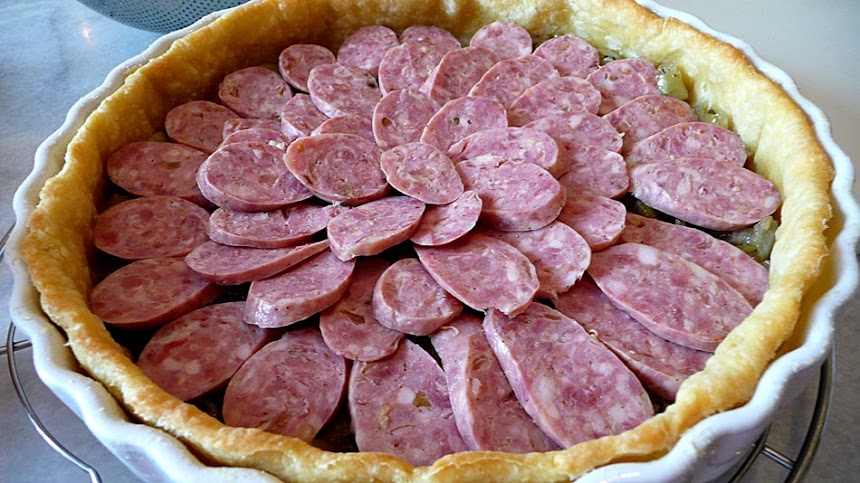 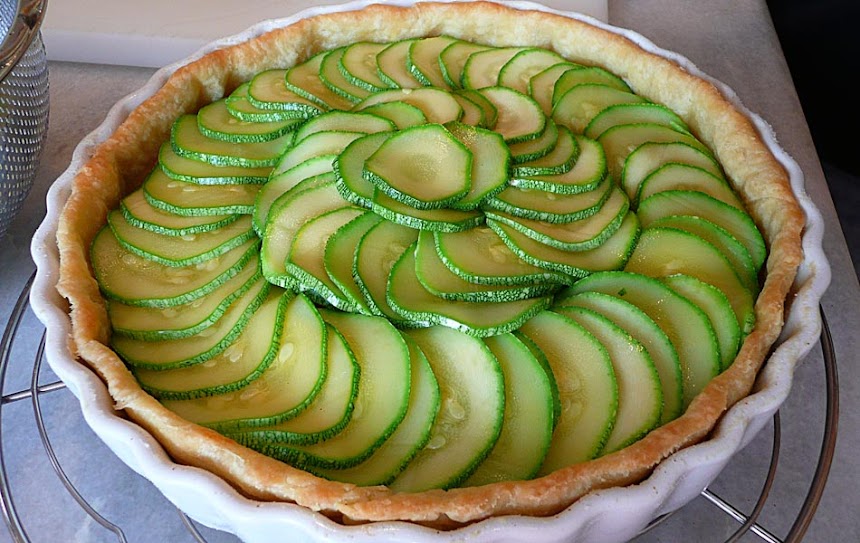 ...and then arrange the blanched zuke slices over the sausage.
Another way to do it would be to lay in zucchini slices and sausage slices in a nice alternating pattern over the top of the onions. Whichever way you do it, drizzle or brush some of the onion drippings over the top. 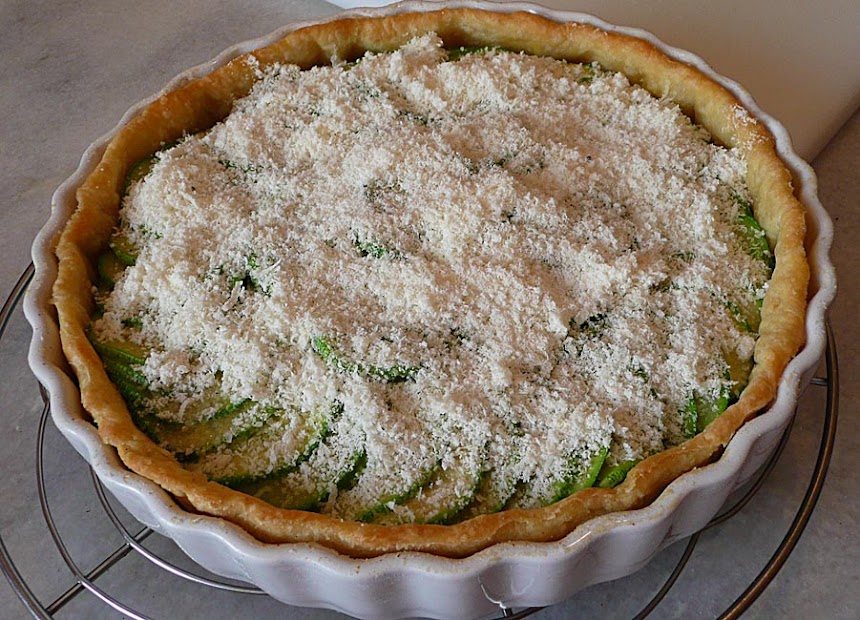 Sprinkle grated Parmesan cheese over the top
before putting the tart in the oven.
Don't put on too much liquid, though. You don't want the crust to get soggy underneath. Then sprinkle grated Parmesan or some other cheese over the top of it all. Bake the pie for 20 minutes or so in a pretty hot oven — not hot enough to burn the crust, but hot enough to brown the top. It's all cooked already, so you are just heating it through and melting the cheese.

This was a collaborative effort but my role was limited to cooking the onions, grating the cheese, taking pictures, and writing it up. Walt is the pastry chef otherwise. He makes the crust and artfully arranges the ingredients in to appetizing patterns.
Posted by Ken Broadhurst at 18:25