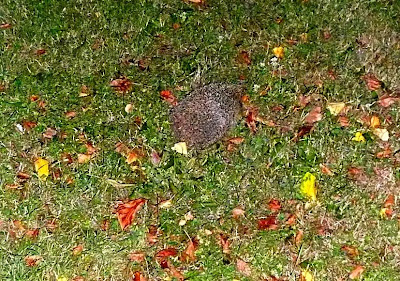 Hedgehog
A couple of nights ago I let Callie out to pee and she started barking wildly at something. I got a flashlight and went out to see what it was.
It was a hedgehog, un hérisson. I managed to get the picture above, with flash, but it's not very good. The 'hog was hunkered down, rolled up in a ball, waiting for Callie to stop barking. I pulled the dog away and made her go into the house. Then the hedgehog disappeared into the night.

Hedgehogs live here in Europe, including the British Isles, but not in North America. Here is the Wikipedia article on them.
* * * * * 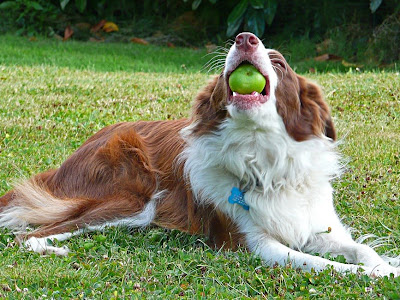 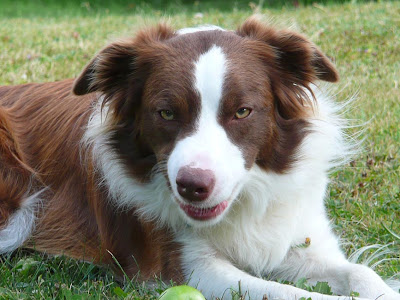 "I can't believe you took that first picture!"

* * * * *
The question of blackberries and where they grow has come up on Walt's blog (here and here) and on this one.

I have memories of enormous blackberry brambles in coastal North Carolina when I was growing up. I was talking to my mother about it last week. On our block in town, there was an old wooden shed, big enough to be a garage for one of those enormous finned Chevies or Pontiacs of the 1950s, that was completely taken over by blackberry brambles in the space of just a few years. If the building didn't collapse under their weight, it was because somebody went in and tore it down just in time.

The blackberries were big, fat, juicy and sweet-tart every summer. We picked quarts and quarts of them, which we ate out of a jar or which my mother made into jam, jelly, or blackberry pie. Wild blackberries seemed to like the very not climate there. It's much hotter than it is in the Saint-Aignan area or the Loire Valley in general. 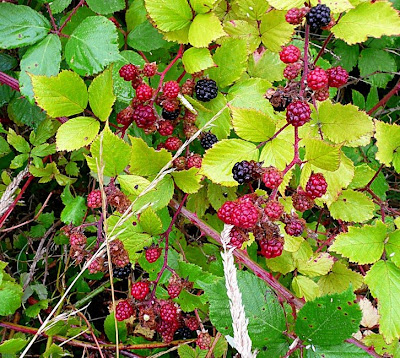 Loire Valley blackberries, not yet ripe on August 11, 2008
It's also much much hotter, but much drier, in the Sierra Nevada foothills in central California. That's where our friend Sue lives, about 30 miles northeast of Sacramento, near Grass Valley and Nevada City. And the blackberries love it there too, as Walt mentioned. Again, the berries are plump, juicy, and sweet. The brambles will quickly take over large stretches of land and even roads and buildings if somebody doesn't keep them cut back.

There are certainly many varieties or species of blackberries. I don't know if the ones here in France are the same ones we had in North Carolina, or if those are the same ones we knew in California. I just know that the Loire Valley blackberries are not as plump and juicy as the American ones we used to enjoy. For whatever reason. I think it must partly be the cool climate.

Walt says he doesn't remember blackberries from his childhood in Upstate New York. I don't remember any in Illinois from the years when I lived in Champaign-Urbana. Maybe the winters are just too harsh for them in those climes, and their roots freeze. Editing: See comments below. I guess blackberries do grow in cold climates. And as Susan pointed out, there are many many varieties. The reason Loire Valley blackberries are smaller, longer to ripen, and not as sweet as ones I've known in N.C. and Calif. must be a matter of terroir! 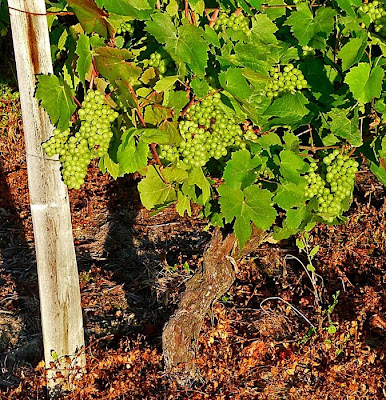 Grapes
* * * * *
Speaking of bad weather, the TV weather forecasters are predicting that France, at least the north, can expect a week of autumnal temperatures and precipitation. Here it is mid-August, and our summer seems to have gone south. I guess we can still hope for a nice warm month of September. That's what happened last year.
Posted by Ken Broadhurst at 07:51