The party lasted 12 hours. I don't know if people in the U.S. have such marathon parties. In my experience, they — we — didn't. But here in Saint-Aignan our neighbors throw one or even two every summer.

And they are not stand-around, eat-some-chips affairs. Yesterday's, chez A. and J.-M., consisted of two full, sit-down meals. And there were approximately 50 people there, I estimate: 6 or 7 tables and between 6 and 8 people per table. There were 7 at our table for lunch. 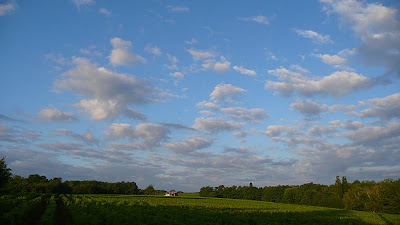 The weather yesterday at 8:00 a.m. in a
picture taken from the far corner of our yard
The only people were knew were the hosts, of course, and Josette, who used to own our house. Josette knew a few people, but not many. So at the beginning it was a little awkward. The weather turned out to be pretty nice, fortunately, because the party took place, from noon until nearly midnight, entirely outdoors. The weather was nice — certainly not hot, but pleasant if you were wearing long pants and long sleeves, as we were, and then chilly enough in the evening that you needed a sweater or fleece jacket.

For the first half-hour or so, we all stood around in little groups, with people who knew each other congregating together. And as people arrived, each one made the rounds and shook hands with all those already in attendance, or did the bise, the French cheek-kissing routine, with people they knew well.

We recognized our village's former mayor, but we don't really know him and didn't end up talking to him at all. And there was a man there who sits at the front desk at the village hall and receives the public — we mostly see him every September when we go there to pick up our new residency permits, our cartes de séjour. We didn't talk to him either.

At the very beginning of the party, a 60-something couple from Montrichard sort of latched on to Josette and me and Walt. At first I thought the woman was a little angst-ridden, slightly too formal, and even more of a chatterbox that I or Josette. But she turned out to be very funny, interesting, and genuinely interested in talking with us. I think that like us, she and her husband didn't really know anybody at the party besides the hosts.

And it turned out that this couple had made a whole career of operating a very nice hotel/restaurant over in Montrichard called La Tête Noire. Unfortunately, Walt and I have never had a meal there. Of course, these people retired between five and ten years ago, before we arrived in Saint-Aignan, so we wouldn't have met them even if we had been customers of La Tête Noire.

The Hôtel de la Tête Noire is a member of the Logis de France association, which in our experience has always guaranteed a comfortable room and a good meal. Here's the hotel's web site, displaying the restaurant page. The people on the main page must be the new owners, or at least operators. They are not the couple we met yesterday.

The man we met was the chef, I gathered, when they ran the place, but he didn't talk very much. I noticed that he partook heartily of all the food served at the party, as everybody else did, but he was a thin, active-looking gentleman. His wife, who was so easy to engage in conversation, was a thin as a rail and very well-coifed for the occasion.

I'll write more about the food tomorrow. For now, let me say it was buffet-style, and it was a full lunch at about 2:00, after champagne and finger-food, and then a full dinner at about 8:00. There were salads, terrines, meats, cheese, and desserts for lunch, and for dinner, for a smaller crowd (maybe 30 people), sausages including boudin noir and andouillette cooked on a grill over a wood fire.

I didn't take my camera so I don't have any pictures. I'm not comfortable taking pictures of people I'm going to write about, so I avoid temptation by leaving the camera at home. I want to be a participant, and seen as one, at these events, and not a reporter or some kind of ethnologist...
Posted by Ken Broadhurst at 07:08