The TV news yesterday had a report on the 2008 wheat harvest in France. It turns out the wheat crop is 20% bigger this year than it was in 2007. For the first time in years, the report said, there is enough wheat to meet demand without going into reserves. As a result, wheat prices are down.

Lower prices, that's news. Of course higher wheat and grain prices didn't have any immediate effect on the price of bread. Ours went up by three eurocents again this year. Right now we are paying €0.81 for a baguette delivered to our house. In U.S. dollars, that's about $1.20.

I've read that wheat is a very small component in the price of French bread. Most of the cost is labor and energy. The price of standard-grade flour at the supermarket went up from 35 to 55 cents a kilogram over the past year, however. 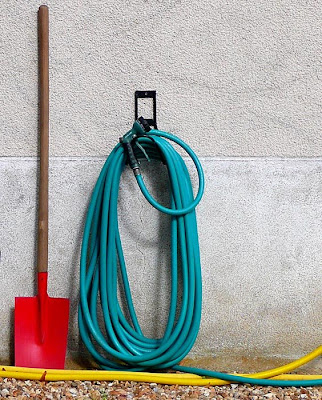 Gardening tools
Speaking of energy costs and bread delivery, I'm not sure I ever said anything here about the personnel change in our bread delivery service. A couple of months ago, the boulanger and boulangère let Roselyne go — for economic reasons, she told me. She didn't seem too upset about it.

We still have bread delivery, but the woman driving the LWV — the Little White Van — nowadays is Sylvie, the boulangère, herself. We are happy to have the service, even if it is not the same without Roselyne at the wheel, and in the van window. Roselyne, as I've said, brought us as much in the way of local color and gossip as in baked goods.

This past weekend, Roselyne, for example, would probably have known or found out who those kids camping out in the vineyard were.

Sylvie and her husband took over our village bakery three or four years ago, after we arrived here. Unlike Roselyne, they are not locals and they aren't tuned in to all the local goings-on. Or at least Sylvie doesn't talk about what she hears and knows. Her personality is totally different from Roselyne's.

And speaking of energy and prices, oil is down and the dollar is up. Those are promising trends, especially as concerns the dollar/euro exchange rate. The reason appears to be a slow-down in the European economies as much as any improvement of the situation in the U.S. Whatever it is, we'll take it.

The euro, which a few weeks ago was worth very close to $1.60, was down to $1.47 the last time I looked. That means that each euro we buy will cost 13 cents less, and that's a big discount. 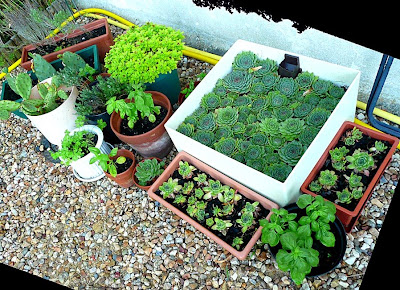 Succulents and herbs out back
On the wheat side, increased supply is lowering prices. I'll be keeping my eye on flour prices. When it comes to fresh fruit and vegetables this summer in France, prices are down too. The other day, for example, I bought not one but two melons (cantaloupes) for €1.15. A few weeks ago, they would have sold at €1.50 to even €2.50 apiece.

It's again a question of supply and demand, but it's demand that has fallen off, according to reports. Prices of fresh produce went high enough that people stopped buying it. Now prices are down and farmers are saying that their proceeds won't even cover production costs.
Posted by Ken Broadhurst at 06:20