Our neighbor the mayor

The specific reason why we invited the mayor of our village over for an apéritif day before yesterday is that she and her husband are going to the U.S. West Coast for a two-week tour in October. 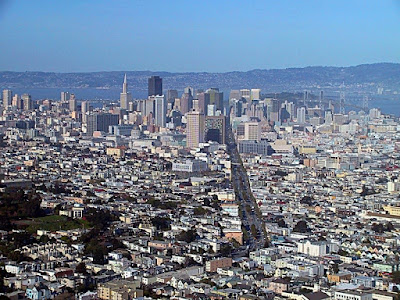 San Francisco in March 2003
A. and her husband J.-M. are neighbors of ours. They are good friends with the woman who sold us our house near Saint-Aignan, and we have gotten to know them all over the past five years.

A. was elected mayor of the village (population 1200 or so) a few months ago. She had been on the village council for several years. She just retired from her job and she will be mayor for the next 5½ years. 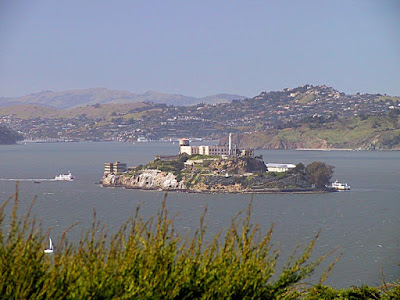 Not exactly the Ile St-Louis in Paris, or the island
in the Cher River at Saint-Aignan — it's Alcatraz
We talked mostly about California, where Walt and I lived for 18 years before packing up all our belongings and moving to Saint-Aignan. The tour A. and J.-M. are going on will also take them to Los Angeles, Las Vegas, Zion and Bryce canyons in Utah, and the Grand Canyon in Arizona. We've been to most of those places too and were able to give them our impressions. 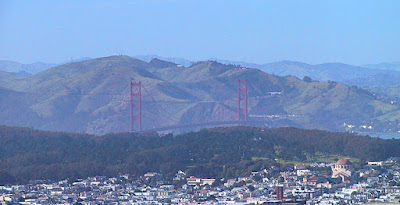 The Golden Gate Bridge
Only at the end of the evening did we talk about the village. A. says she is very busy, even during this slow season when people are on summer vacations.

For example, a group of "travelers" — gens du voyage in French, people we would call gypsies in U.S. English — have set up an illegal encampment down on the main road, about a mile from our house. I've driven by there several times, and to my eye it looked like a nice campground for people visiting the area this summer. 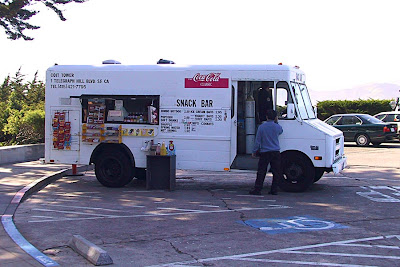 We told our neighbors that this is a typical American café. Ha ha ha.
I assumed that the people who live next door to the campground, in a nice big house, had set it for tourists. But no, they had no role in the whole thing, and evidently they are very unhappy about the whole situation. The first "travelers" (read "nomads") arrived a few months ago and then their friends and families started showing up. 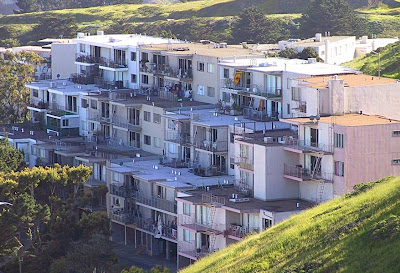 The U.S. equivalent of a gypsy camp?
Apartment buildings on the side of a hill in San Francisco.
For electricity, they tapped into a line on the utility pole out on the road. They don't have authorization or a meter. They just hooked themselves up. And for water they did the same thing. They tapped into the mains along the road and aren't paying for the water they use. There must be six or eight trailers and RVs parked on the property, and I don't know how many people.

And so goes life in Saint-Aignan...
Posted by Ken Broadhurst at 08:05