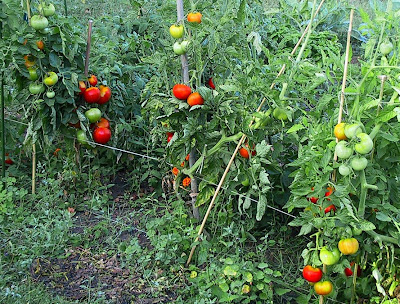 Tomatoes in the garden exactly four years ago today.
We had our first vegetable garden here in Saint-Aignan in 2004. It might have been the best one so far. The weather was good, and the ground must have been fertile. It hadn't been tilled in many years.

This year, we don't yet have any red tomatoes. 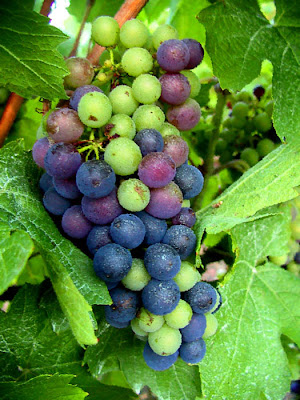 Grapes out back in mid-August 2004.
And the grapes out in the vineyard are just barely starting to ripen in mid-August 2008, compared to the nearly ripe ones you see above, in a picture taken on this date in 2004. 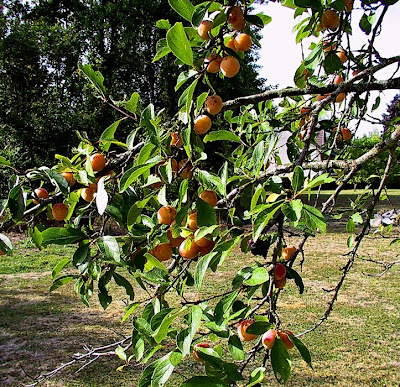 The nice plum crop of summer 2005
The 2005 garden was also very good, and it was also a year when there were a lot of plums. the summer of 2005 was probably the best one we've had, weather-wise, with constantly warm temperatures and a lot of sun. The garden was great. 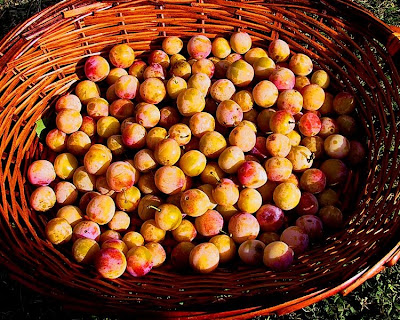 The result of a few minutes of picking on one plum tree
15 August 2005
In 2008 we haven't had any plums at all. And no cherries either.

The 2006 garden wasn't bad either. We had tons of tomatoes and tons of summer squash. 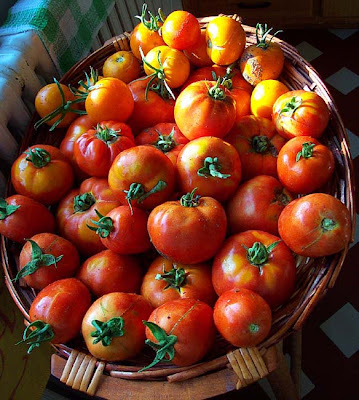 Tomatoes from the garden on August 15, 2006
In June 2007 we had more cherries than we knew what to do with (but we figured it out). Plums too. Otherwise, it was a lousy summer. The vegetable garden was overtaken by weeds, and the weather was too wet for us to be able to do much about it. 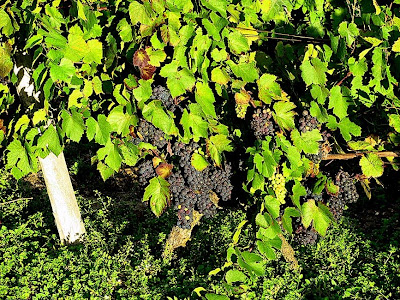 Ripe purple grapes out back on 15 August 2007
But look at the grapes in mid-August 2007. They were nearly all ripe. The month of April had been really warm and dry. Everything got a good head start. But there was so much rain in May, June, July, and August that the grapes were full of water and kind of tasteless. Then in September it turned dry and hot, and thegrapes shrank a little. Sugars and acids developed. It was a good year after all.

September 2007's warm weather came too late for the vegetable garden, though. It was a bust. 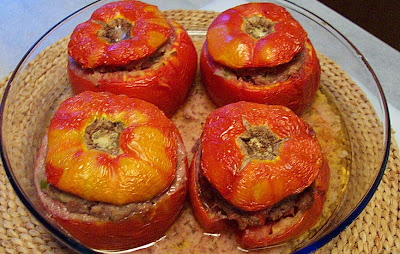 Tomatoes from the garden (tomates farcies)
on August 15, 2006
This year, the vegetable garden looks good but the tomatoes aren't ripening. There are no plums or cherries. In the vineyard, the grapes are all still green. Our month of April was cold and rainy — that's why everything seems delayed, I guess — and we planted the garden late.

It's no wonder people whose living depends on raising fruit and vegetables turn to pesticides, greenhouses, and fertilizers to make sure they get good crops. Nature is capricious, and every year is different from the ones that went before. At least that's how it is here in the Loire Valley.
Posted by Ken Broadhurst at 08:35