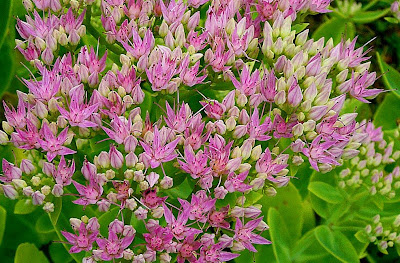 Sedum flowers that bloom late in the summer in our garden
I was tempted to put on my fleece jacket, but the sun was coming up and I realized that I would be too warm in fleece by the time I got home. A heavy cotton shirt was enough over my tee-shirt. 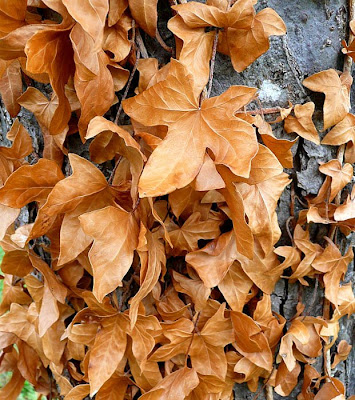 This is ivy trying to grow up an apple tree. I cut the stems at
ground level to kill it before it could take over the whole tree.
The sun did come up, and the sky is fairly clear right now. But a front is moving in and we are supposed to be under thick clouds with the possibility of some drizzle this afternoon. That's not going to ripen any tomatoes.

It's not even going to water the garden for us. It's too bad that on these cloudy days we don't get just a little more rain. Everything is very dry now. 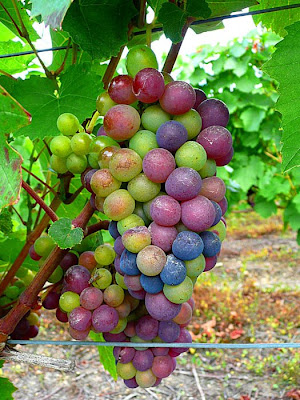 Grapes are ripening, even if tomatoes are not.
Callie ran through the tall grass this morning, as well as up and down the rows of grapevines. She's supposed to be a sheep dog, a collie, but on mornings like this one I tell her that she has turned into a "burred" dog. Her coat is full of burrs and sticks when we get home. 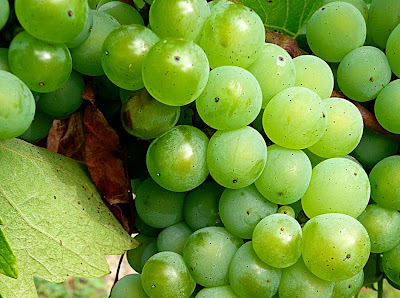 Green grapes looking plump and juicy
I'm not ready to give up on the tomatoes yet, because we might have a warm and dry September. Meanwhile, I've been looking a recipes. Here's the one I have for confiture de tomates vertes. It was given to me by CHM, who got it from a French woman we worked with in Washington DC.

Cut the tomatoes in half and squeeze out the seeds, then cut the halves into thin slices. Put them in a large glass or china bowl and sprinkle with the sugar. Allow to marinate for 24 hours.

The next day, cook the tomatoes over a low flame in a heavy pot with the lemon juice and lemon rind for 2 hours. Stir from time to time with a wooden spoon.

I don't know why the title is in French while the text is in English. I guess that's what happens when you get a recipe from a bunch of translators. 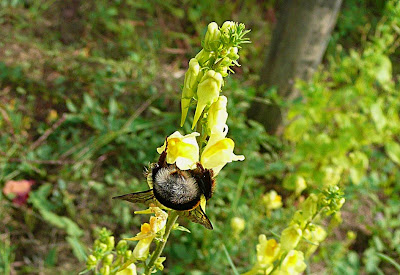 This is a bee's butt — un cul d'abeille de bourdon.
You never know what you are going to see in the vineyard.
I looked up green tomato chutney recipes and found one posted by Keith Floyd on a BBC site. We used to watch his cooking and wine shows when we got BBC television here in France, but they ended that a couple of years ago. Besides tomatoes, sugar, and lemon, Floyd puts ginger, chili peppers, raisins, apples, and vinegar in his mixture.

And then I looked into the idea of having fried green tomatoes. On her Simply Recipes site, Elise has a recipe that calls for breading slices of green tomatoes using milk, flour, egg, and breadcrumbs (or cornmeal). That's a lot of trouble and makes a fairly thick and heavy layer of fried breading on the tomatoes. 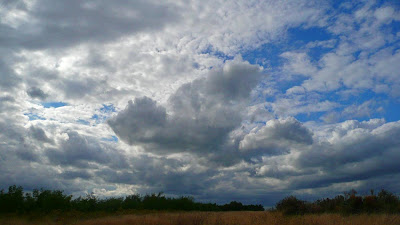 August 20, 2008, about a mile from the house
I think I like the Southern approach to breading and frying better. Just salt the tomato slices so that they will "sweat" a little and then dredge them in seasoned cornmeal only. The crust will be lighter and absorb less oil. Here's a recipe on About.com.