I've spent a good part of the summer working on one little corner of our yard (or garden, if you speak British English). It's the northwest corner, the one that is farthest from our back door. If it weren't so far from the house, the far corner would be a nice place to have a little patio, because there's an excellent view of the vineyard from there.

The previous owners, Jean and Josette, used the far corner it as a compost pile. Walt moved the compost in 2003 or 2004, so that it wouldn't be in plain view. It wasn't all that nice to look at. 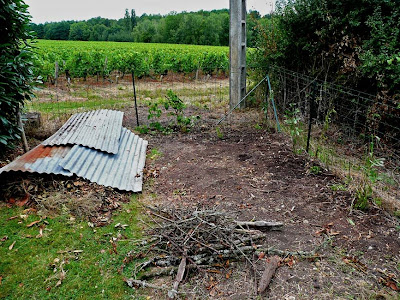 The far corner of the yard, with the vineyard just outside.
Under the sheets of metal are leaves for burning later.
The small pile of wood will be kindling for the woodstove.
Then last year, I ran the tiller through that unused corner plot. The soil is loose and rich compared to the heavy clay soil where we plant our main vegetable garden. That year, we made the far corner into a pumpkin patch (pictures here and here from last December), and it produced abundantly.

This spring, after all the rain we had in 2007 and early 2008, weeds had taken over the plot. They were waist-high. Poking around back there, I realized that blackberry canes were growing over the through the fence, threatening to invade our yard and pull the fence down.

I started chopping on them. First I cut them down to ground level as best I could with pruning shears (sécaturs, they call them). Then Walt ran the brush cutter back there, cutting down a strip about a meter wide along the outside of our fence. 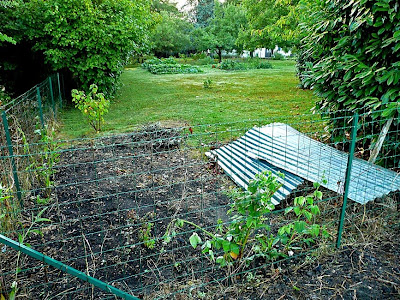 Looking into the yard from out back on the tractor path.
You can see the vegetable garden, apple trees,
and the back door of the house in the distance.
This week, I went to work back there again. Just outside the fence, I started digging to see what was there. It turned out to be an extension of the compost pile — that same loose, almost sandy soil — but with garbage and a lot of ashes in it. I dug up tin cans, heavy iron bolts, and the skeleton of an old umbrella. I hoped I wouldn't uncover any other skeletons out there!

I decided against running the rototiller on that plot for that very reason. Besides, I don't plan to plant anything out there except some wild chicory, hoping to have a mass of blue flowers there next summer. It's not our property, as far as I know. I got out a hoe, a rake, and even a pickax and I started digging out the roots of as many blackberry plants as I could. It's hard, dirty work.

On the inside of the fence, I planted some little plum trees that I grew from pits. I picked the plums last summer over at our neighbors' (with permission) and thought they were so good that I saved some pits. I planted them in a pot a year ago, and in the spring they came up. Now they are in the ground, out in the far corner. I hope they really do turn out to be plum trees, and that they will produce. The plums are small and red-skinned with yellow flesh (topic with pictures). 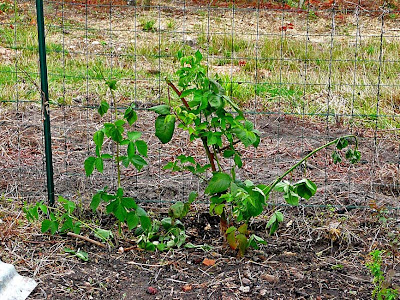 Thornless blackberry bushes I planted along the fence.
Last week our friend Gisèle (who has been featured several times on this blog) brought us a bowl of big fat blackberries. They were two or three times as big and juicy as any of the wild blackberries that I've been seeing (and picking and eating) all around the vineyard on my walks with the dog. I asked Gisèle where she got them, and she said she grew them in her garden.

She said these particular plants didn't have thorns, and she would dig up a couple and bring them to us. And she did, day before yesterday. So now I've planted those out by the back fence, in that same corner. She says they need to be up against a fence for support. 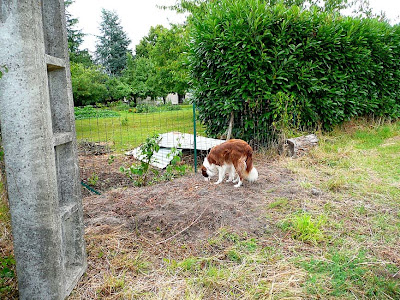 Callie checking out the newly revealed ground
where a big thorny blackberry bramble had taken hold.
I don't know why the hedge ends where it does.
It's funny how you can get focused on one little section of the yard and spend weeks or even months working on it. But the far corner really needed work, since we didn't want wild blackberries, called ronces in French, to invade it. The other day I transplanted some of those nice white daisies out there — the ones I photographed back in July.

And I now have a pile of leaves and twigs that will make a nice fire in the fall, when we've cleaned out the garden. We burn leaves and other yard waste on one of the garden plots every year in November or December. The ashes are good fertilizer. To protect it from rain, I covered leaf pile with some big sheets of corrugated metal that were out behind the shed. 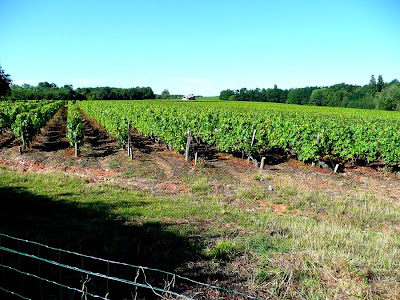 View of the vineyard from the far corner
I rained during the night, a quarter of an inch. It was predicted and I'm happy it came. Walt says it was a loud thunderstorm, but I slept through it. I guess I was pretty tired from all the digging and hauling yesterday morning.
Posted by Ken Broadhurst at 09:17