On a recent day, one topic raised was honeysuckle, called chèvrefeuille in French. That means "goatleaf" and the question was why is honeysuckle called that and what does it have to do with goats?

Whatever the reason, the terms seems to go back to vulgar Latin. Italian has a similar name for the same plant. At least one Canadian web page says that goats love to eat honeysuckle leaves. If that's true, that explains it. 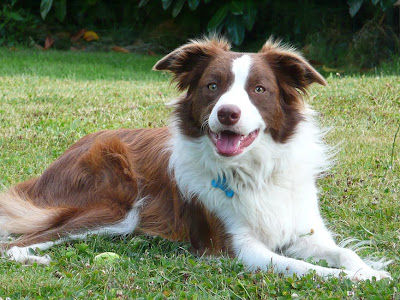 Another site says the plant might be so named because « elle grimpe comme une chèvre » — "it climbs like a goat."

And a third says the name comes from an old legend according to which « les chevreuils en broutent les jeunes pousses et s'en enivrent » — "roe deer graze on the young sprouts and get tipsy from eating them." Chevreuil, a word closely related to the term chèvre (goat), means "roe deer," a kind of small deer that lives in Europe and the British Isles. Row deer aren't much bigger than goats. 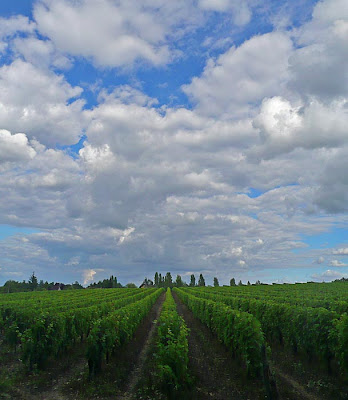 
A chevreuil fawn is called a chevrotin, or sometimes a chevrillard. The term faon applies too. That's what the dog and I saw Sunday afternoon when went out for our walk.

We stepped out the back gate and turned right to go down the hill on a tractor/hiking path. Callie was very interested in a big pile of brush that I had raked up just outside the back corner of our fence, where I've been working to cut and then uproot some invasive blackberry brambles.

While she was sniffing around there, about 50 feet farther down the hill I saw a roe deer fawn emerge from a row of grapevines and slowly lope off away from us. Callie missed it entirely. 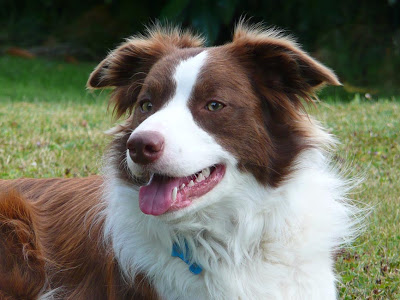 We continued our walk, and it turned out the fawn was hiding just around the corner of another parcel of vines. Callie saw it this time, and took off after it. The dog can be graceful, but compared to the fawn she looked raggedy and frenzied.

The little deer jumped over a low barbed-wire fence in an elegant bound and disappeared into the woods. Callie quickly found a way through the fence and I thought: "Will she ever come back?" I started clapping my hands and calling her name, and not 10 seconds later, there she was, back on my side of the fence, tongue hanging out and a joyful look on her face. She's a good dog. 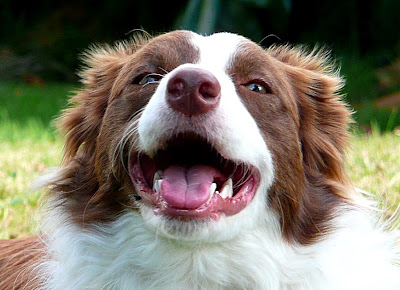 This morning it was a rabbit, or a hare. People tell me there aren't really any rabbits around here. The hare was hiding in between rows of vines.

That wasn't enough to keep Callie away. I couldn't see either animal, but I heard a commotion in the vines. And suddenly the hare came running toward me. It nearly ran between my feet. It made a nice thumping noise as it fled. Callie was close behind.

Luckily the dog didn't dive into the bushes in her pursuit, as the hare did in its escape. I called Callie back. She seemed happy just to have gotten that close.