Power failures don't phase us any more. We have a gas stove!

I don't want to give the impression that our electricity outages are frequent. Most that we've had over the past five years have been caused by bad weather: strong thunderstorms or high winds. They haven't been caused by strikes, as they used to be in Paris when I lived there in the 1970s. 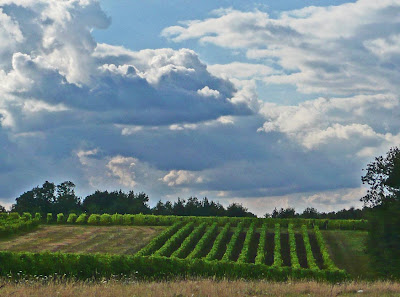 The vines in August, with clouds
A few days ago we were awakened by lightning and thunder in the night. At first, the flashes of lightning were off in the distance and we couldn't even hear thunder. By about 4:00 a.m. the storm was upon us. There were several sharp bolts of lightning with loud claps of thunder following immediately. When that happens, it of course means that you are very close to the action. 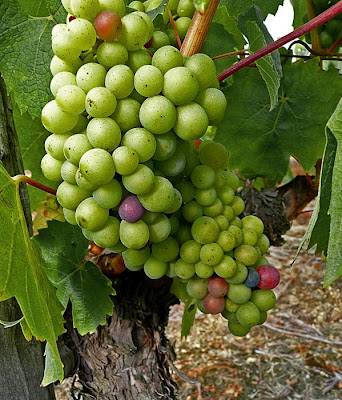 Electricity or not, the grapes are ripening.
By 5:00 in the morning the current had gone off. I can always tell because the digital clock in the bedroom radio goes dark. I got up at 6:30 to see what time it was and there was still no current. I went downstairs to check our circuit breaker panel and all looked normal down there. The outage wasn't simply chez nous, it was a neighborhood or village problem.

So what did I do? I put the kettle on one of our gas burners, lit the fire with a long fireplace match, and made tea pretty much as usual. That was nice, and makes us even happier that we got the new stove. 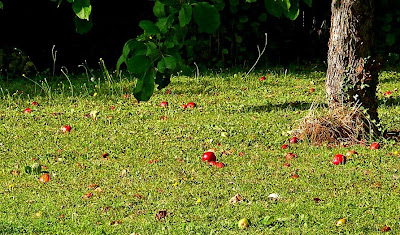 Apples falling close to the tree out back
Later I called a neighbor to make sure we weren't the only house in the hamlet without power. Once, a year or two ago, we spent three or four hours without electricity only to discover that the only reason was that our own main breaker had been tripped by a surge. We'd been sitting in the dark for a while needlessly — all we had to do was flip the main switch.

This time, it was more widespread. Bernard the neighbor said he had called in and the Electricité de France switchboard was saying nobody knew when our current would come back on. They were overwhelmed with emergency calls because of the early-morning thunderstorm. 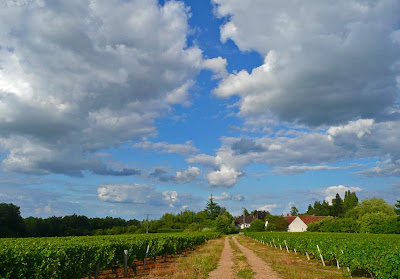 The road from the vineyard to the hamlet, August 2008
We didn't get current back until about 2:00 p.m. By then, we had cooked a satisfactory lunch on the gas stove, being careful not to open the refrigerator or freezers very much. We had also sat around for most of the morning, just looking at each other blankly, realizing how much we depend on the Internet and our blogs for our daily entertainment.

Luckily I have a battery-powered radio so we weren't completely cut off from the rest of the world. It was raining on and off, so we couldn't even get out and work in the garden.
Posted by Ken Broadhurst at 06:54