Lunch at the farm inn

What did we have for lunch? Chevreau. That's the goat equivalent of agneau, lamb. So I guess it's kid in English. It was the meat of a young goat braised in a mustard-garlic sauce, served with sautéed potatoes. 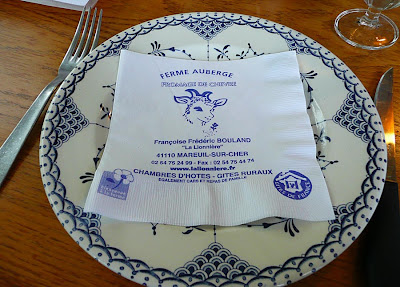 Lunch at the Ferme-Auberge de la Lionnière in Mareuil-sur-Cher
And it was lunch at the local farm inn, the Ferme-Auberge de la Lionnière, which is just a couple of miles from our house as the crow flies (it's a little further driving there on narrow curvy roads). The Lionnière — I'm not sure where the name comes from — is a goat farm run by Françoise and Frédéric Bouland, who offer B&B-style rooms, a couple of gîtes that will each sleep 8 or 10, a dining room where they serve the products of their farm, and a facility for raising goats and making goat cheese.

The mustard-garlic braised chevreau was probably the best thing I've ever eaten there, and one of the best dishes I've had in a while. On past visits, we've eaten lamb, pintade (guinea hen), and chèvre (the goat equivalent of mutton, I guess). 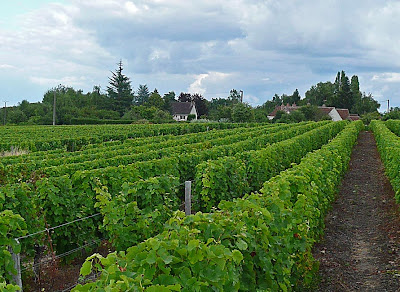 Rows of vines leading to the hamlet called La Renaudière
Actually, yesterday, three of us had mustard-garlic chevreau and the fourth had chèvre cooked in Sauvignon Blanc wine. I tasted that too (the food is served family-style) but it needed some of the mustard-garlic sauce, in my opinion. The farm inn is not a restaurant and doesn't offer an extensive menu. We were just lucky yesterday to have a choice of chevreau or chèvre as the main course. There were no choices otherwise — you get what they are serving. 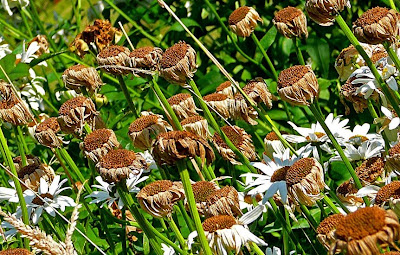 It's starting to feel almost like autumn here in Saint-Aignan.
The temperature this morning was below 14ºC/57ºF.
The starter courses were some little toasts spread with fresh herbed goat cheese, followed by a green salad dressed with vinaigrette and shavings of hard goat cheese (sort of like parmesan or dry jack cheese but with a goaty flavor), and some little beignets — fritters I guess you'd say. They were puffy little balls of fried batter that had melted goat cheese inside.

To be authorized to use the name Ferme-Auberge, "farm inn," the owners are required to serve what they raise and grow themselves. So here most of the food is based on goat and goat cheese. 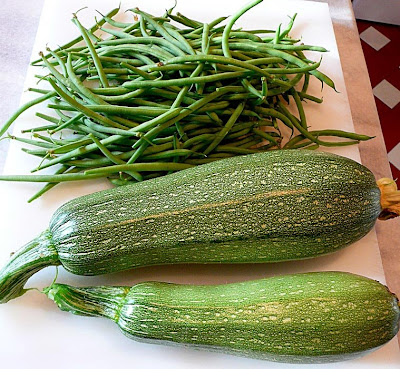 Produce we are starting to get from our 2008 vegetable garden
We were having lunch with some people who drove down from Paris on their way to the town of Cognac, down south of us. I knew them because the woman, who is from Hong Kong but grew up in San Francisco and now has lived in France for more than 20 years, is a contributor to a travel forum that I participate in. Her husband, from Iowa originally, has also lived in Paris for more than 25 years.

It's always nice to put faces on the typed messages you read on forums and blogs, and this was no exception. We had a delicious lunch, enjoyed getting to know new people whom we will probably see when we go to Paris in the future, and spent a pleasant afternoon. We were too busy talking and making acquaintaince with new people to take pictures of the food. 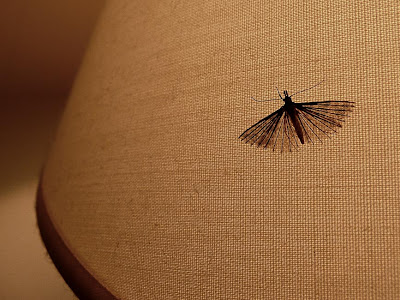 A moth landed on the lampshade
next to my computer yesterday evening.
Oh, and dessert was an apricot charlotte. That's whipped cream with fresh apricots mixed in and poured into a cookie crust, served chilled. It was also delicious. Over the course of the meal, we had a pitcher of Sauvignon Blanc white wine from a property called La Méchinière in Mareuil-sur-Cher, and a bottle of Pinot Noir red made by a man we know and periodically buy wine from, Jean-Christophe Mandard, also in Mareuil. Both wines were very good.
Posted by Ken Broadhurst at 06:45