I'm still in the recovery phase, of course. My face is still swollen, but not grotesquely. The emergency room experience was not horrible by any means, but it was bedlam. There were people running in every direction, and talking in loud voices. All I could do was lie in my bed, or sit up a little, and observe what was happening all around me. There was no food or drink. When I had a very painful sore throat Tuesday night, I asked the doctor if I could have some water to drink. He refused, saying he didn't think that was a good idea.
I was given medications through a catheter inserted into a vein in my right hand. I don't know what it was. Twice during the night I had what the doctor called un aérosol, which was some kind of nebulizer — my mother used one of those to soothe her respiratory discomfort. I think it was dispensing something like prednisone as a kind of mist that you can breathe into your lungs. I wasn't experiencing any respiratory distress, and I'm not now, but I've been prescribed a course of prednisone in pill form for the next week. I'm also taking antihistamines (which are called des antihistaminiques in French — that word is a mouthful.)
Walt and I got a lot done yesterday, but I'll tell you about it later. Temperatures are supposed to be in the 95ºF range this afternoon, and as high as 100 or even 105ºF tomorrow and Sunday. And it will stay hot for another week after that. This is reminiscent of the Grande Canicule of 2003, the year we moved into this house. I guess we ought to have found some air-cooling device we could use in the house during spells like this, but I've always until now thought these kinds of heat waves would stop plaguing us eventually. Now I guess not. It's global warming gone crazy. 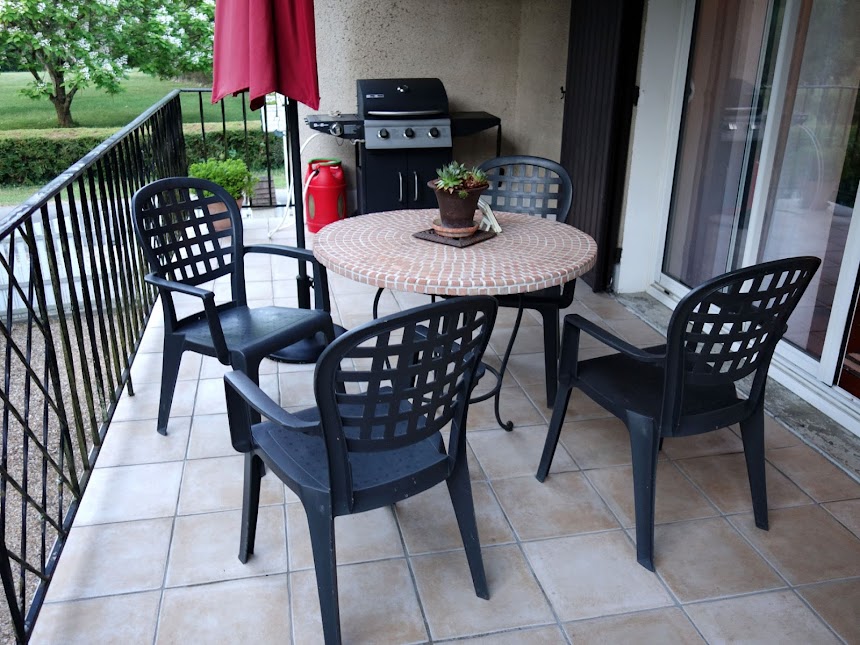 Here's some news: we fired the contractor who was supposed to lay new tile on our front, east-facing terrasse. Not that he was doing much work. I went to the bank Tuesday morning and confirmed that an 18-month-old check has expired and cannot be cashed or deposited. I'll tell you the whole story in a few days. Walt pressure-washed the old tile and put the table and chairs out on the terrasse yesterday, after 18 months of safe-keeping in the garage. We can enjoy sitting out there in the shade again, which is a real pleasure in this kind of weather. The temperature out there is about 68ºF right now, which used to be considered a good afternoon high in this part of the world in June.
I've abandoned the loft for the time being. I slept in the guest room downstairs last night. My unusually extensive heat rash on my arms and legs is driving me crazy, but I have plenty of soothing intensive care lotion to slather onto it.
Posted by Ken Broadhurst at 06:30