Right now, I've got a lot of the windows wide open to let some cool morning air in. We're expecting a week of high temperatures in the upper 80s and 90s in ºF. — or even over 100 on Saturday and Sunday. Yesterday afternoon, the sun burned at least three plants in the greenhouse to a crisp. Literally. One was an aucuba that had been doing really well in there, and another was a schefflera (umbrella tree) that had been happy in there too. Now they are both compost. I'm afraid Walt's basil seedlings are completely fried too.

I wasn't here to do anything about those plants, at least not soon enough, and Walt was busy with other things too. Preparing food for my return was one task. Tuesday morning I had bought carrots, cucumbers, and beets for salads, but I wasn't here to peel, grate, and dice them on Wednesday. So Walt did it. Predictions had indicated that the really hot weather wouldn't start until today. Already this morning I have some kind of heat rash on my arms, and I just noticed that it is present on my legs as well. It itches.

Where was I? Well, in the emergeny room at the hospital in Romorantin, that's where. I had to spend the night, and that was the first time I've ever had to spend the night in the hospital. On Tuesday, I had taken Natasha out for her afternoon walk. Outside it was hot, or at least very warm, and the sun was blazing hot in a clear blue sky. I didn't walk for long — maybe 30 minutes — and I took a route that kept me and the dog under shade trees as much as possible. But even before I got back home at 5:00, I noticed some swelling in the left side of my face, near my mouth. I got home, had a glass a water, and told Walt what was going on. He said he was starting to see it. Over the next hour, the swelling continued to spread across the lower part of my face. My lips were puffy and tender.

By about 6:30, I realized I had to call for help. What if my throat starting swelling closed? Or my nasal passages, or my tongue? I called an emergency number for the little hospital in Saint-Aignan, which doesn't have an actual emergency room. The woman who answered the phone asked me to describe my symptoms. When she heard what I had to say, she told me she was going to transfer my call to a doctor at the local fire department's SAMU (Service d'Aide Médicale Urgente) — what I call a rescue squad. The doctor picked up in a minute or two, and asked me to describe my symptoms for him.

He especially wanted to know my age and whether I was having any difficulty breathing. He said he was sending out paramedics who would examine me. A few minutes later we started hearing the siren of an approaching rescue vehicle. When it arrived here, a nurse was one of the four men on board. He started checking my vital signs. The whole crew was astonished and impressed with how swollen my face was. One man started laughing every time he looked at me. He apologized, and I told him I realized that I looked like a freak or some kind of clown. I laughed with him because it was all good-natured. 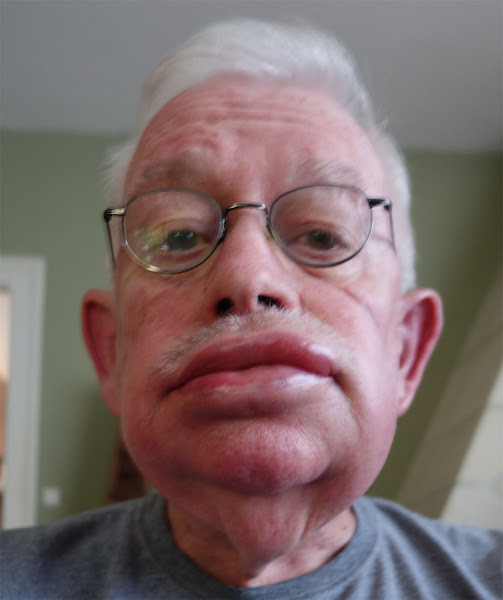 In a couple of minutes a SAMU doctor — probably the one I had talked to on the phone — drove up. He examined me too — I was flat on my back on a gurney inside the vehicle. The doctor made a phone call and then told me he was having me taken by ambulance to the emergency room in Romorantin, a town of 20,000 about 20 miles east of Saint-Aignan.

The paramedics strapped me to the gurney, turned on the air-conditioning, tooted the siren a couple of times, and off we went. Nobody could tell me whether I'd need to spend the night over there or not. I didn't have anything with me except my French national health insurance card, and the prescription form from my doctor's office listing the pills I take regularly. No wallet, no money. I was dressed in shorts, a t-shirt, and sandals. I should have taken a cell phone with me, but that idea got lost in the shuffle. We headed toward the east, rocking and rattling, siren blaring at every intersection, and cooled by AC.

Here's what I looked like. I had snapped a selfie just before the paramedics got here.
Posted by Ken Broadhurst at 07:09