We have company coming from California in about 10 days, so we are busy preparing and cleaning the house for their stay. After two years of having nobody in for even just for an hour or two — with the exception of Evelyn and her friend from Alabama for two casual dinners a year ago — the place really needed some freshening up. It's only when you see your house and yard through somebody else's eyes that you realize how shabby it is starting to look.
On Wednesday, the day Walt drove over to Romorantin to bring me home, we lost several big plants that were in the greenhouse to the extreme heat we're experiencing. One plant's leaves were burned black, and the another's leaves were without exception roasted to a dark brown color and hanging limply off the stems. A beautiful nasturtium in a big pot was completely toasted. And so on. On Thursday, I spent an hour or two in cool morning air moving most of the rest of the plants out of the greenhouse and putting them outside on the north side of the house where they are in the shade all day. I watered them all generously. This is something I would have done a month or two ago had we not been expecting the contractor to start demolishing the old tile on the deck and laying new tile. The plants would have been in his way if they had been where they are now. It was just one way the contractor was holding us hostage to a schedule that was never clearly defined. 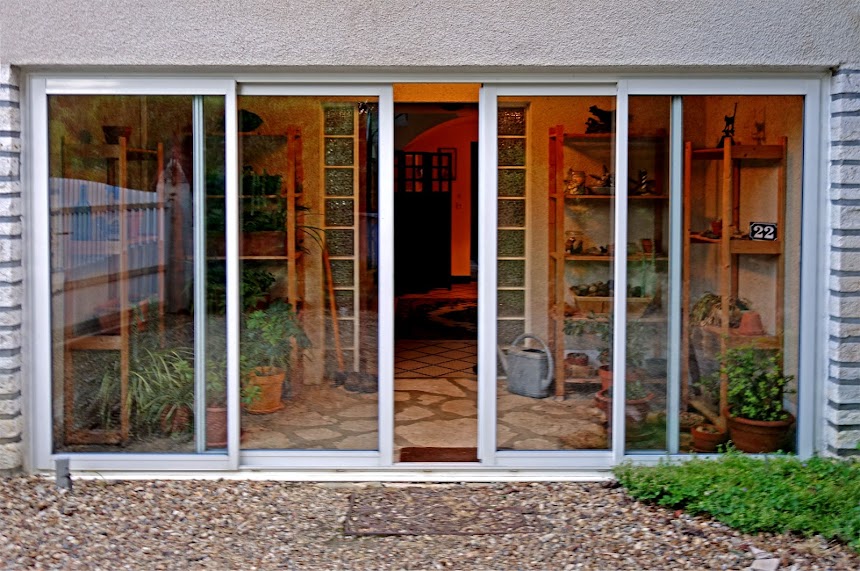 I just snapped this photo of our front porch and doors, with clean glass.
Yesterday I did something I hadn't done in two years. I washed the sliding glass doors that we had installed more than 15 years ago to close in the little porch at the front door of the house. I guess I should be ashamed to tell you that, but that's the reality right now, after two years of Covid confinement. I also watered the plants in there generously. The little sunporch faces east, so doesn't get direct sunlight in the afternoon. The plants in there didn't burn up, even though they desperately needed a drink.
As far as the disappointing contractor is concerned, when I called his office on Thursday morning, his wife told me that her husband had asked her to give him our dossier that very morning. Forgive me for thinking that was just a ploy. When I told her we had decided to cancel the tile work, she got pretty hot under the collar. I've talked to her at least a dozen times over the past 18 months, and until Thursday she had always been polite, if evasive and hard to pin down. She always said her husband would get in touch with us, but he almost never did. A few months ago, I told her that every time I called to ask whether our job was on their schedule, she replied with some expression like "it will get done un jour ou l'autre" or on ne vous oublie pas. She was taken aback and acted offended that I said such a thing, but it was the truth. 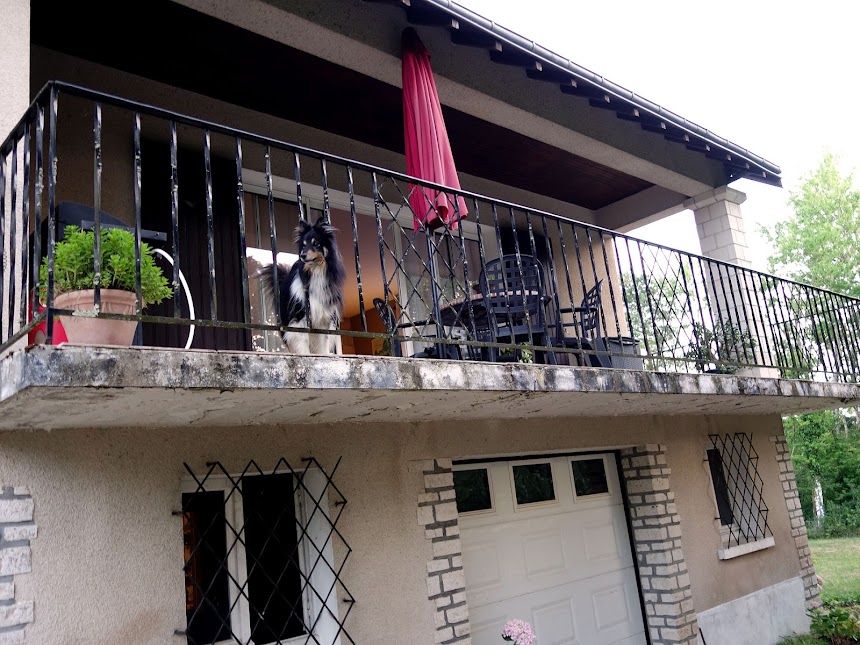 I also just snapped this photo showing why the deck needs renovating. The underside of the structure needs to be
scraped or sand-blasted and probably painted. The deck edge needs some kind of treatment to prevent moss
and algae from growing on it when the weather turns rainy. You can't see them here,
but quite a few of the tiles on the deck are cracked and loose.
On Thursday, I pointed out to her that the two-thousand euro check we had sent her in December 2020 had, as my bank confirmed, expired. It could no longer be put through. I told her that nevertheless, I would appreciate it if she would send it back to me. "I'm not paying the price of a stamp to send you a check when you don't want us to do the job you contracted us for," she said. Before I could stop myself, I heard the expression Ça c'est vraiment mesquin come out of my mouth. Mesquin means petty, stingy, small-minded. My mother would have used the adjective "common" to describe that kind of behavior and attitude. BTW, did I say this already? In France, you cannot stop payment on a check once you have signed, dated it, and delivered or sent it to the payee. The only checks you can stop payment on are checks that you have misplaced, or lost, or that have been stolen from you, and that you have not dated or signed. Still, banks have been known to accept checks that are legally expired, and it can be quite complicated to get your money back when that happens.
So Thursday afternoon, the contractor sent me an e-mail — that was a first — saying that he would be over here the next day to do the patching of cracks that have appeared in our garden shed walls. The one part of the job we had engaged him for and that he actually had done was to strap the walls of the concrete-block shed together with tie rods to stabilize the structure. We were happy he got that done, and we now owe him payment for that work. I'm just going to wait and see if he sends us a bill. Do you think he showed up yesterday? Hell no. Two months ago, when he did the garden shed work, he promised us that our deck work would be finished avant l'été — before summer. All he was waiting for was some dry, sunny weather. We've had nothing but that kind of weather for a couple of months now. If this June doesn't qualify as summer, I don't know what would.
Posted by Ken Broadhurst at 06:14