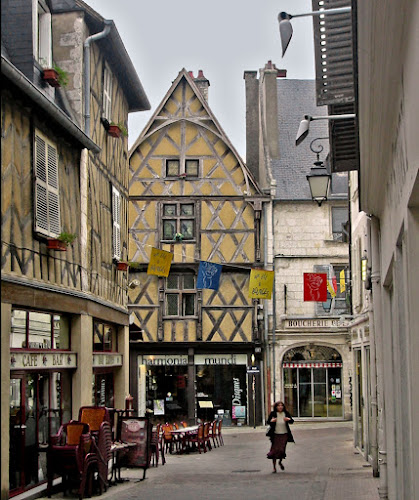 Most of my recent posts about the city of Bourges have been about the cathedral there and the public gardens. Here are a few photos of the town beyond the cathedral. The first three of these photos are some that I found on my hard disk yesterday. They were taken in 2003 by our good friend Cheryl.


Cheryl was originally from Chicago. She and I worked together as teaching assistants in the French Department at the University of Illinois in the early 1970s. Both of us spent the 1974-75 school year in Paris, she as what they called une assistante d'anglais in a lycée (high school) in the south suburbs (Antony) of the city. I was working on the staff of the U. of Illinois year abroad program in the Latin Quarter. Those Champaign-Urbana and Paris experiences turned us into good friends. 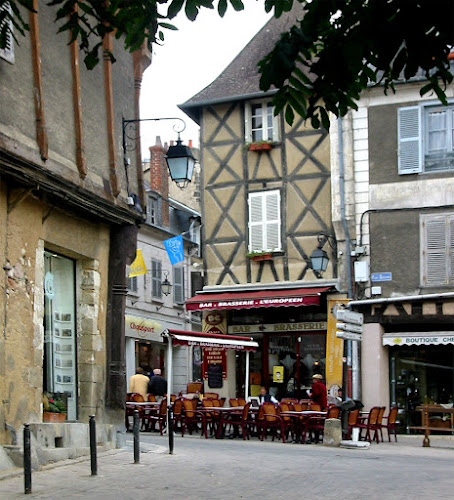 Cheryl ended up moving to California in 1979 and soon met John, a man from Florida who she married in 1986. Cheryl, John, I were together at their house when the big Loma Prieta earthquake devastated the SF Bay area in 1989. John passed away in 1998, and Cheryl passed in 2016. Both were just 63 years old when they died. 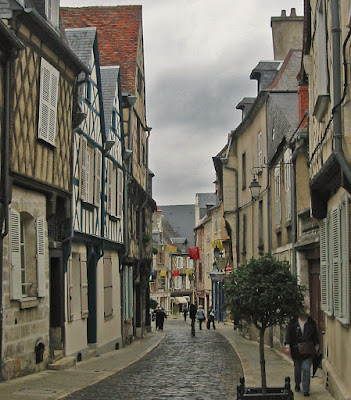 Cheryl was one of the first people who visited us after we moved to Saint-Aignan in June 2003.These are from September that year. She stayed in Saint-Aignan for three weeks, if I remember correctly, and one day during that stay she said she wanted to go to Bourges, and she wanted to go by herself. She bought a train ticket for her day trip. I dropped her off at the Saint-Aignan train station in the morning and picked her up in the evening when she got back. She really enjoyed that day, and I'm so glad she let me copy her photos onto my hard disk for safe-keeping. 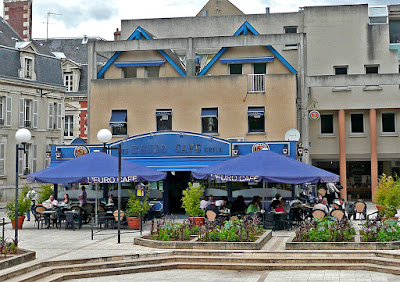 Walt and I became friends in Paris in 1981, partners in Washington DC in 1983, and spouses in 2012. Over that time, we spent a couple of nights in Bourges back in 1993 and 1995, when we were on our way to other places. We were very impressed with the cathedral there. I didn't do much photography back then. Only when digital cameras became a big thing in the late 1990s did I start to get interested in taking pictures. This one and the two below are photos that I took in June 2008 in Bourges. 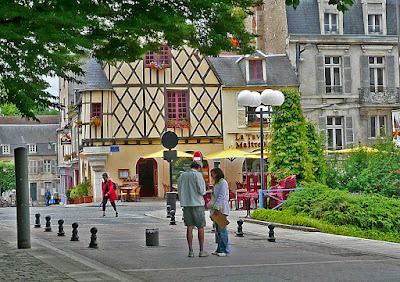 In the early 1980s, CHM and I had worked together in Washington DC for a few years as editors and translators on the staff of a magazine published by the U.S. government and then for the agency's press service. Then I moved to California. CHM's partner Frank lived in southern California, and Frank's daughter lived in Silicon Valley. They visited her almost every summer back then, so we kept in touch with CHM, becoming better and better friends over the years through those visits. Then CHM moved to California in the mid-1990's. and we all spent time together in the southern California and in the SF Bay Area. The restaurant in this photo is where we had that memorable lunch of foie de veau. 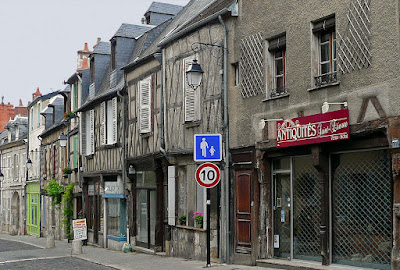 After Walt and I moved to Saint-Aignan, CHM started coming to visit us here frequently. We've spent a lot of time exploring the Loire Valley and other parts of France, including Picardy and Burgundy... not to mention Paris. I have spent a lot of time with him at his apartment there. Probably a third or more of the material on this blog is about those visits and travels. I really miss the good times we had — Frank (who passed away in 2006), CHM, Walt, and I — over the past 30 years in France and in California. I've been posting about all our travels together for 18 months now, including the day in Bourges... since Covid-19 has made us into virtual shut-ins.