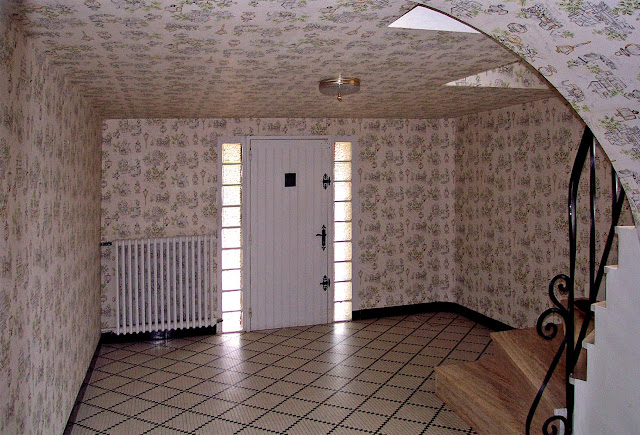 In this house outside Saint-Aignan, which we bought 17 years ago, the main living space is one floor above ground level. The only "living" space downstairs is an entry hall. It's an odd arrangement, because we don't actually use the entry hall as living space. Well, we used to, before we had the attic converted into living space. For several years, I had my desk and computer down there, and for a while we had a single bed there too. It was made up as a day bed or sofa, and two or three times when we had visitors it served as an extra guest bed. 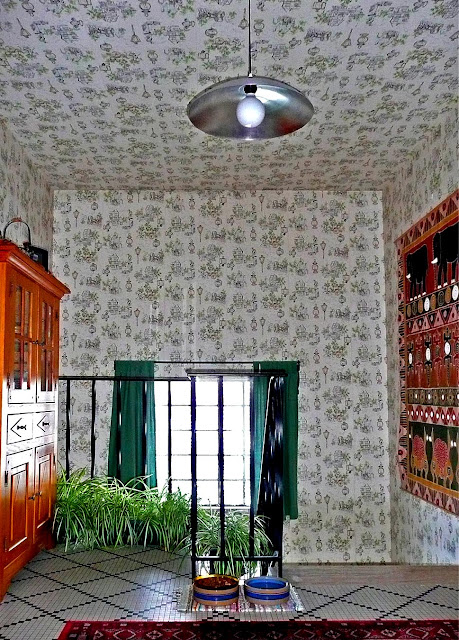 The downstairs entry hall was remarkable mainly for its wallpaper, which looked like what you see in the picture above. That wallpaper covered the walls and ceiling down there and all the way up the stairwell walls, not to mention the landing walls and ceiling — a huge space. The ceiling in the entry hall is 2.1 meters high — I just measured it. That's not quite 7 ft. Between the busy floor tile and the even busier paper on the walls and ceiling, it was pretty oppressive. 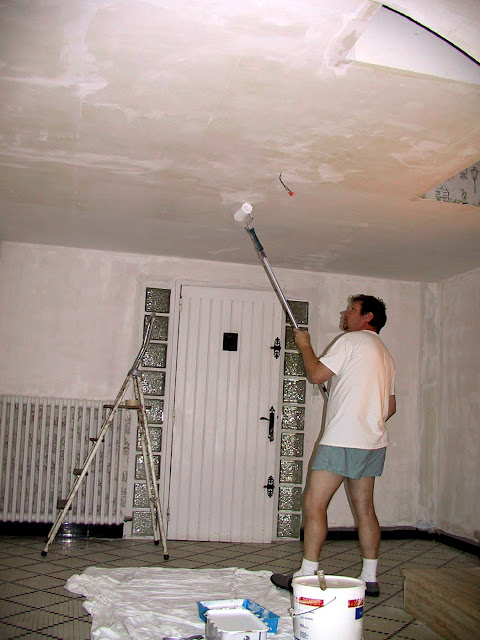 The ceilings on the main level of the house are 2.6 meters high — that's 8½ ft. So the ceiling above the staircase is up at about 15 feet. It didn't take us long to decide that we were capable of stripping the paper off the walls and ceiling of the entry hall. We did the job in August 2005, and we painted the room a neutral color. That helped a lot. There's Walt painting the ceiling.


However, we decided it was too dangerous for us to try to perch ourselves on ladders over the staircase to do the job of removing the paper on the stairwell walls and ceiling, as you see in the photo above. It was 2010 before we took that paper down, with help of the crew that was converting the attic space for us. They stripped the paper off the high ceiling and walls above the stairs. We did the rest ourselves. 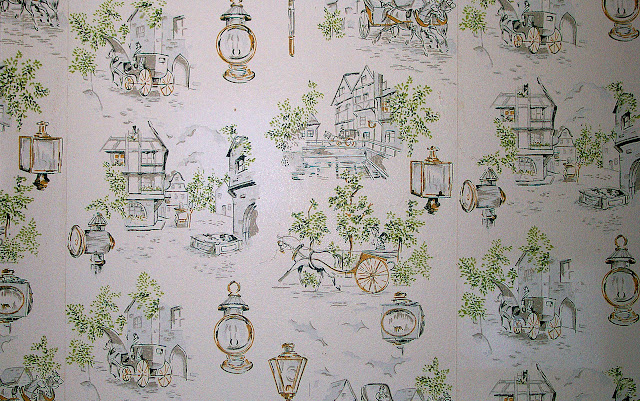 Here's a close-up of that busy wallpaper. The entry hall itself measures about 4 x 4 meters — about 13 x 13 feet, or nearly 170 ft² — including a fairly big area of wasted space under the staircase. We've never figured out what to put under there, but it was all wallpapered too. You could easily argue that the whole entry hall is wasted space. If the upstairs included a doctor's office, the downstairs space would make a good waiting room. 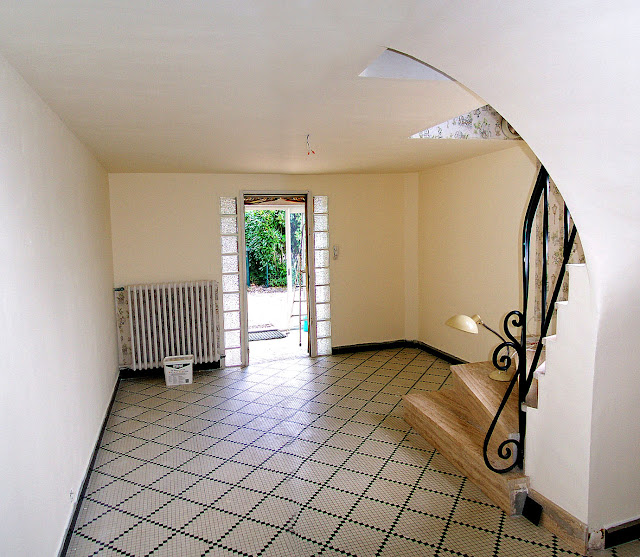 The result was good. In a house like this one, one problem with taking down wallpaper or even just painting the walls is the big cast-iron radiators in all the rooms. You pretty much have to take them down off the walls to work on the space behind them, and they weigh a ton. Besides, before you take them down you have to hook up a hose to the boiler and completely empty the system, letting the water run into the ditch along the road outside. Otherwise, you flood the whole house. There are about a dozen radiators on the system, and many meters of pipes. 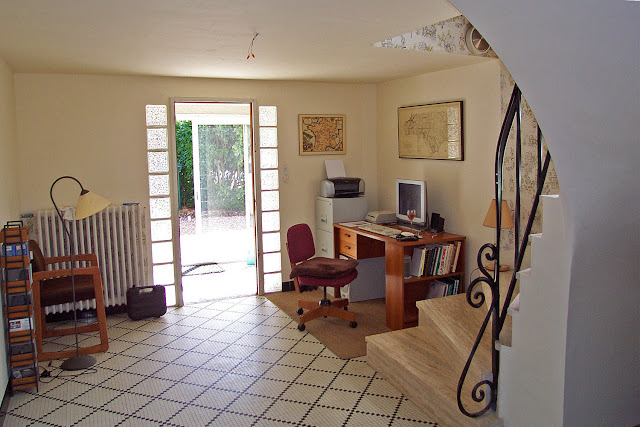 After we sanded and painted the entry hall walls and ceiling, I got my desk and computer set up down there again, right by the front door. We bought and put a new light fixture up on the ceiling. I didn't mind sitting down in the entry hall in summer, because it's the coolest part of the house. In wintertime, though, it was downright cold down there, despite that big radiator. That's what finally motivated us to have the attic converted into living space in 2010. Heat rises, and it's warmer up in the loft than at ground level.
Posted by Ken Broadhurst at 06:30