Boy, you all really get worked up in your comments about old French houses that have been given a new look (see yesterday's post and comments). I say: at least they didn't demolish those old houses over in Montrichard to build something new and shiny. And a thought: could it be that those houses' exterior walls, like the walls and interiors of many of France's big old churches, were painted in bright colors when they were built hundreds of years ago? Did anybody look at some the photos of the old half-timbered houses in the city of Troyes? Have you been to Rouen?
On another subject, maybe you are aware of the fact that Walt is in Albany NY, his home town. At least I hope he has now arrived there. He had a family emergency he needed to help with. One of his brothers flew to Albany from Texas, where he lives, and another from South Carolina, where he lives. And Walt flew in from France, with a long layover at O'Hare airport outside Chicago. It's hard to tell from internet weather sites, but I think it might be snowing in Albany right now. If all has gone well, his plane from Chicago should have landed at Albany a few minutes ago. I'm waiting for an e-mail or phone call from him. No news yet...
Meanwhile, I've been going crazy for a week trying to get my new computer set up and running. I made great progress yesterday. The first problem I had to resolve was how to clone the SSD that was my boot drive on the old computer onto a hard disk so that I could put that SSD into the new computer. It would need to have the contents of the new computer's boot disk transferred to it. Trying to do that, I learned that the company I bought the new computer from had prepped its boot disk using an outdated format called MBR instead of the newer, more flexible, faster format called UEFI. 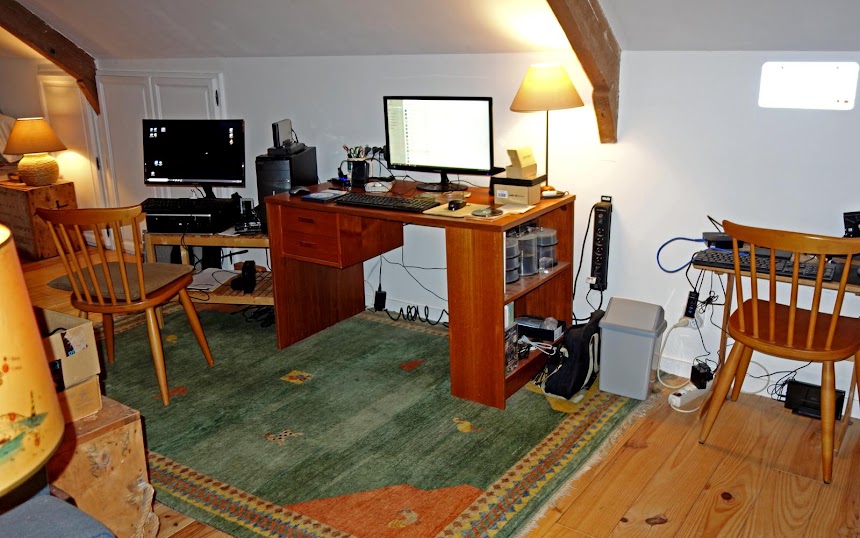 This was my computer space one week ago today, with both the old and the new  computers running.
Running on the MBR-formatted disk, the new computer's operating system wouldn't recognize my external USB hard disks, where I have tons of files (including photos, films, and music) stored. I ended up having to reformat the boot disk and re-install Windows 10. Then I couldn't get a couple of other hard disks, which are external SATA devices and not USB drives, recognized by Windows on the new computer. It was very frustrating, because I really want everything to work at least as well, if not a lot better, than everything worked with the old computer. Here's a photo I took just a couple of minutes ago. Maybe it doesn't look much different, but it feels different.
The new computer has a faster CPU, which I want to be able to take advantage of. But I need the hard disks to work too. I have spent hours and hours reading different web sites to figure out how to get it all working smoothly. And I had a breakthrough yesterday. Suddenly, by updating the driver for the new computer's SATA hard disk controller — it was almost automatic, but I hadn't thought of doing it — all the hard disks starting whirring happily. And I was happy too. Now I have to figure out what I'm going to do with the old computer, which is still in good working order. I guess I'll donate it to Emmaüs, which is the French equivalent of our American Good Will charity organization.
Posted by Ken Broadhurst at 06:15