Le grenier means "the attic" because traditionally, in old farmhouses, harvested grain, hay, and straw were stored up there, providing some insulation over the living space below. Our grenier most likely never had grain stored in it. After we had it converted into living space, we starting calling it "the loft" — that comes from the expression "hayloft" I guess, and  le loft is used as a term used in France for an attic that has been converted into living space (aménagé). 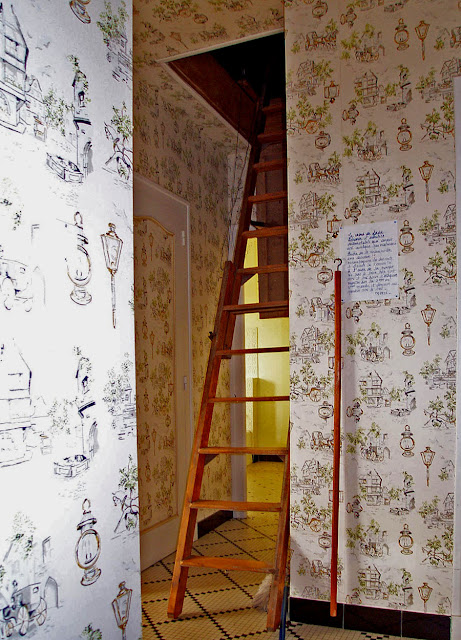 Part of the aménagement of the attic was putting in a staircase. When we first saw the house in 2002, access to the grenier was via a trap door equipped with a folding, drop-down ladder. It was pretty rickety, so we almost never went up there until the conversion was completed in 2010. Here are a couple of photos of the pre-fabricated staircase we bought and had installed.
By the way, we had an electrician in yesterday afternoon. He couldn't find any reason for the circuit breaker problems we had 24 hours ago. He said only: Il n'y a rien de plus bête que l'électricité... He just told us to let him know if the problem re-occurs and he'll find a fix. 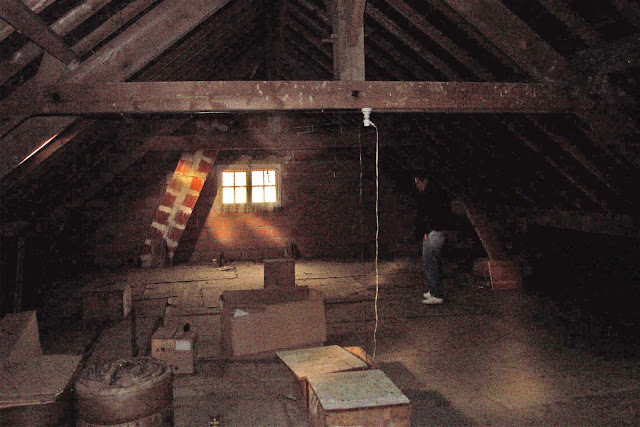 The attic in this house is very spacious. Converting it gave us about 60 m² (650 ft²) of extra living space. Luckily, those horizontal roof beams are high enough above the floor that I don't bump my head on them — I don't have to duck as I walk the length of the room. We use the space as a bedroom, family room, and computer room. We finally had a half-bath (toilet and sink) put in up there last summer. 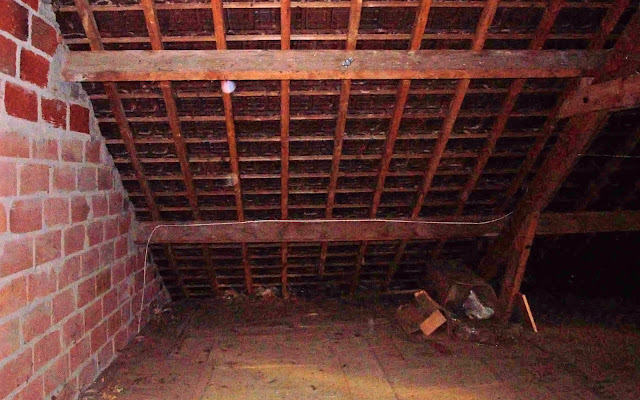 One funny thing about an attic like this is that there is no moisture or airflow barrier under the roof tiles, which are made of concrete and hang on wooden slats. Air just blew through, especially when the wind was blowing from the west. In February 2010, just weeks before the conversion began, we had hurricane-force winds and a dozen or more tiles were lofted, as it were, off the roof and landed in the front driveway on the east side of the house. 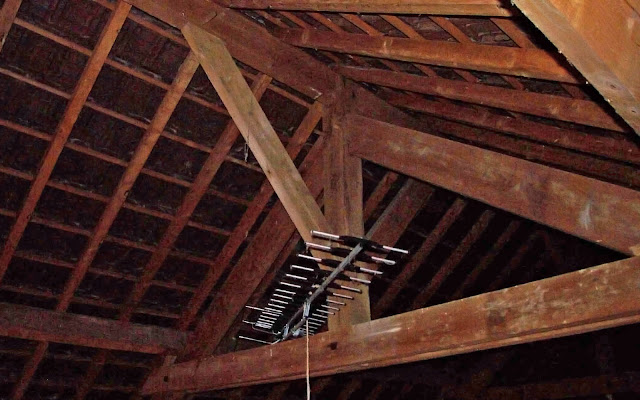 The attic conversion didn't include putting in such a barrier. When we have strong winds, you can still feel air movement in the loft, despite the 20 centimeters (8 inches) of insulation that now lies under the tiles, and the plaster board walls that were put in. As you can see, there was a television antenna up in the attic, but it no longer could receive the signal after the insulation was put in so we got rid of it. We get television via a satellite dish. 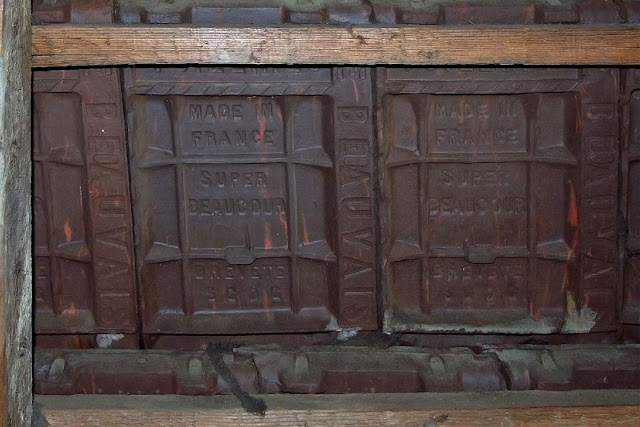 There were two little windows up in the attic, one facing east and the other facing north. They were in pretty good shape, so we kept them. We also had two Velux "roof windows" put in, facing west, for afternoon light. We (ourselves) painted the plaster board walls white — white because the paint is less expensive and also provides the impression of more space. Here are some pictures I took in 2010, when the work was complete. 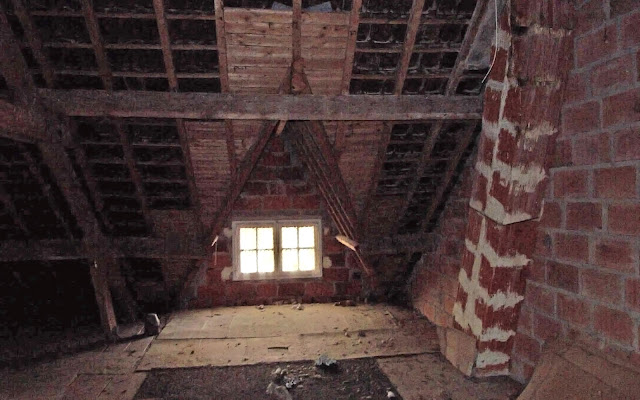 There was a thin layer of glass wool insulation on the attic floor, covered by a rough wooden sub-floor and some big sheets of cardboard. Before the conversion work started, we opened the north window and threw all that cardboard out. We gathered it up and burned it in the back yard. The contractors who did the attic conversion then put down a second sub-floor of rigid particle board and finally laid down knotty pine floorboards that we chose. The floor is a little squeaky, but wooden floors often are. You don't hear it downstairs.
Posted by Ken Broadhurst at 06:00