Here's the bathroom in the gîte. It was upstairs with the bedrooms. It was spacious, and there was a nice electric towel warmer on one wall. That was the only radiator in the house that we turned on during the week we were there. It was nice to have a warm towel to dry off with after the morning shower. 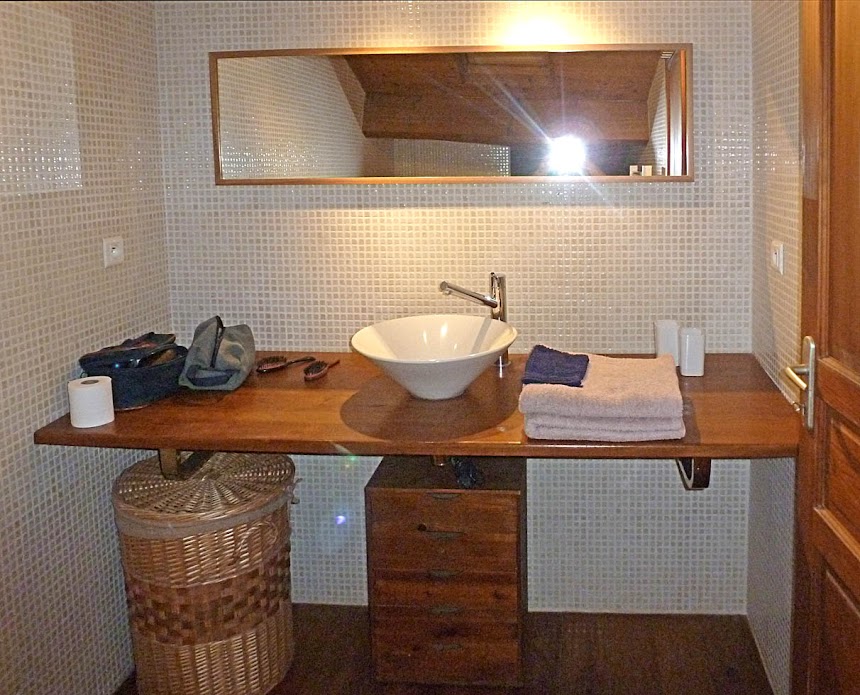 All the woodwork upstairs was beautiful, and the bathroom walls were nicely tiled. The upstairs floors, however, were just boards laid down and nailed or screwed to ceiling joists or beams, with no air space, insulation, or moisture barrier under them. It was noisy when the dog or Walt walked around up there and I was down in the living room, but no big deal. One morning, though, both of us were sitting in the living room, directly underneath the bathroom, and we suddenly started hearing a tap-tap-tapping noise. 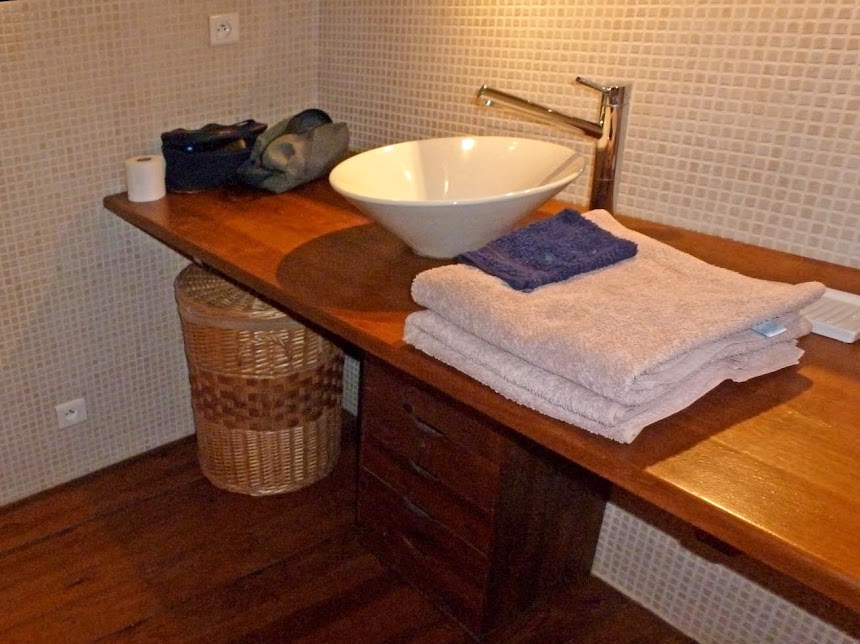 At first I thought it was my laptop going haywire, but I quickly realized that the sound was being made by water dripping down from the ceiling and hitting the coffee table right behind the laptop screen. At least it wasn't dripping into the keyboard! I had just come downstairs after brushing my teeth. We raced upstairs to see if the water was running up there. Maybe the sink was overflowing. But no, it was just a small leak in the sink faucet. Water was running down across the sink counter and dripping onto the floor. Then it just went right through the floor and dripped into the living room. We were very careful about that faucet from then on, and we told the owner about it when we were leaving. He said leaks like that are always really hard to find and stop. The leak was minor and intermittent, seeming to depend on what position the faucet's control wand was in, and we didn't have any more trouble with it because we made sure to dry off the countertop after each use. 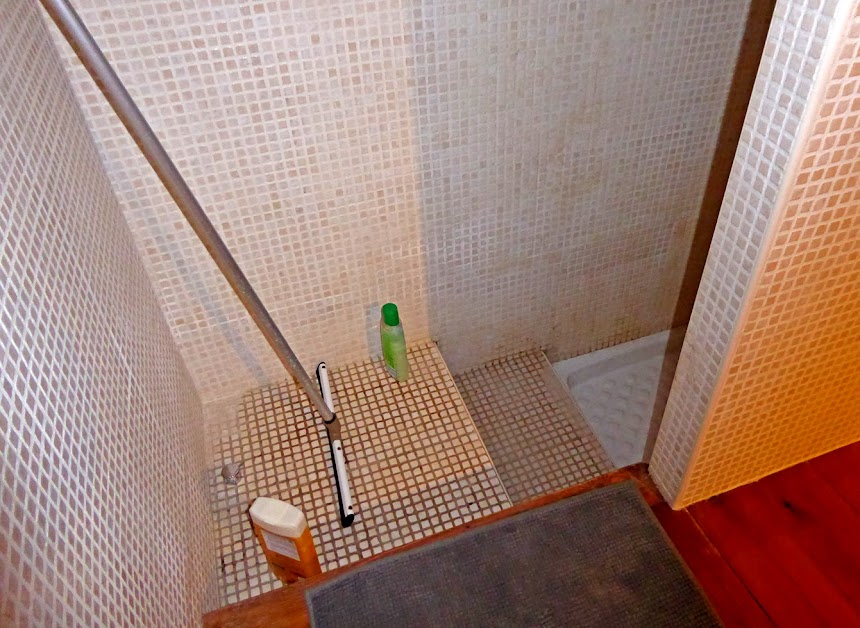 Here's the shower. It was definitely one of the most unusual features of the house. Because the bathroom is built under the slope of the roof of the house, there wasn't enough overhead space to put the shower in at floor level and still have enough headroom. So it was set down into the floor, meaning that the ceiling in the downstairs half-bath (les W.C.), right under it, had been lowered to accommodate it. By the way, there was no bathtub in the house. 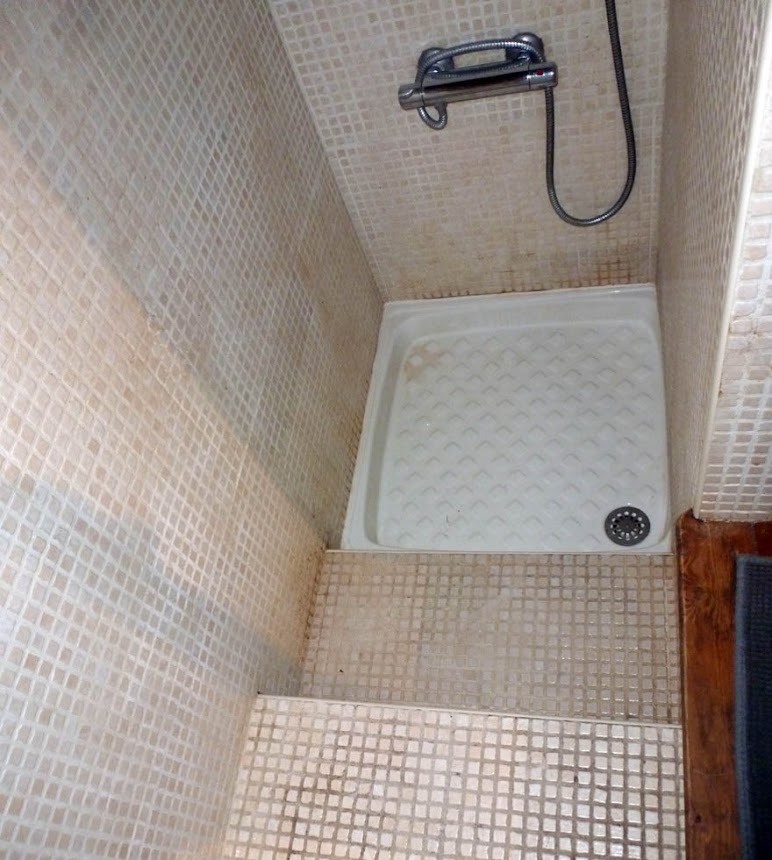 So you had to step down three steps to get to the recessed shower pan. And it was a pretty tight space too, but we're used to that in France. These are the kinds of solutions you have to find when you are trying to install modern conveniences like plumbing, heat, and electricity in old stone houses like this one (built in the 18th century) and dealing with cramped spaces. Anyway, the water was good and hot and the pressure was fine. However, there was no light in the shower. Some light came from one of the bright halogen or LED bulbs in the fixture over the mirror and sink, across the room. It was strategically aimed. 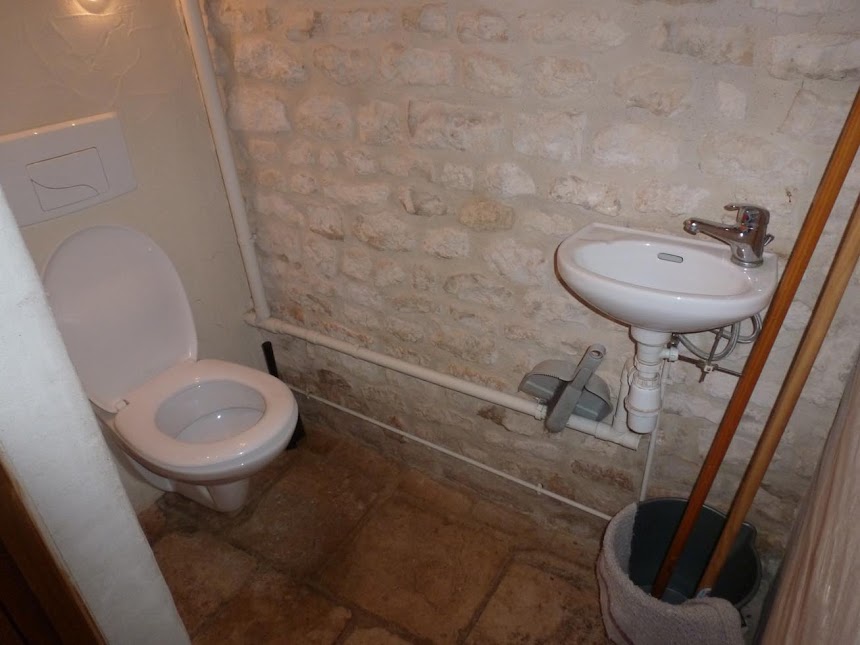 This is what the downstairs WC, just off the kitchen, looked like. It was clean and functional. There was only cold water in the little sink, but the kitchen sink with hot water was just steps away. Both upstairs and downstairs baths had perfectly fine toilets. The biggest problem with the upstairs bathroom was actually a very low ceiling beam. I banged my head on it a couple of times as I was climbing up out of the shower. More about that tomorrow.
Posted by Ken Broadhurst at 06:30