Yesterday I made one of the recipes from the Cuisine Alsacienne book that I mentioned here recently. It was the one for Coq au riesling, which turns out to be the same thing, basically, as the Burgundian classic Coq au vin, but cooked with Alsatian white wine rather than Burgundy red. 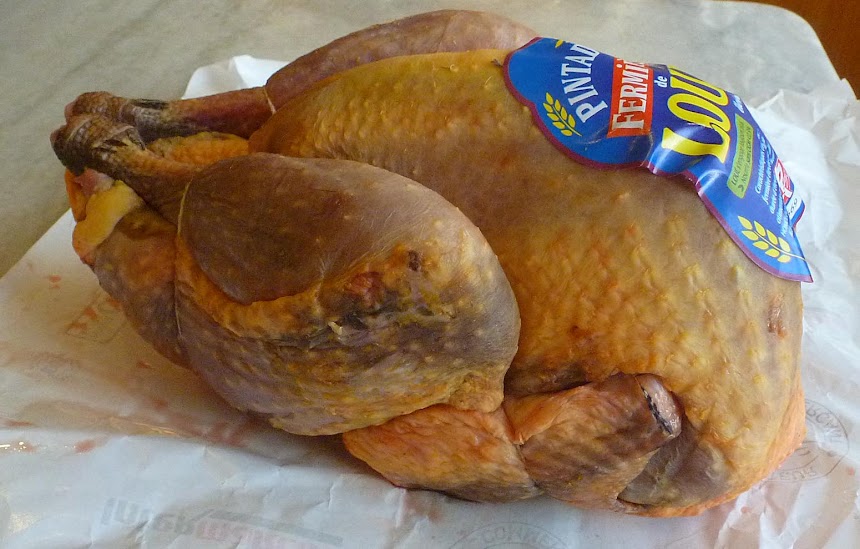 Getting riesling wine here in the Loire Valley is not a problem. It's widely available in the supermarkets and is usually inexpensive at 4 or 5 euros a bottle. Mushrooms, smoked pork belly cut into lardons... those are easy-to-find standard ingredients too. But the recipe called for cooking a 1.5 kg coq. That's just 3 lbs. and I've never seen a rooster/cockerel that small in the markets or supermarkets around here. The coqs I've cooked in the past weighed in at 7 to 8 lbs. 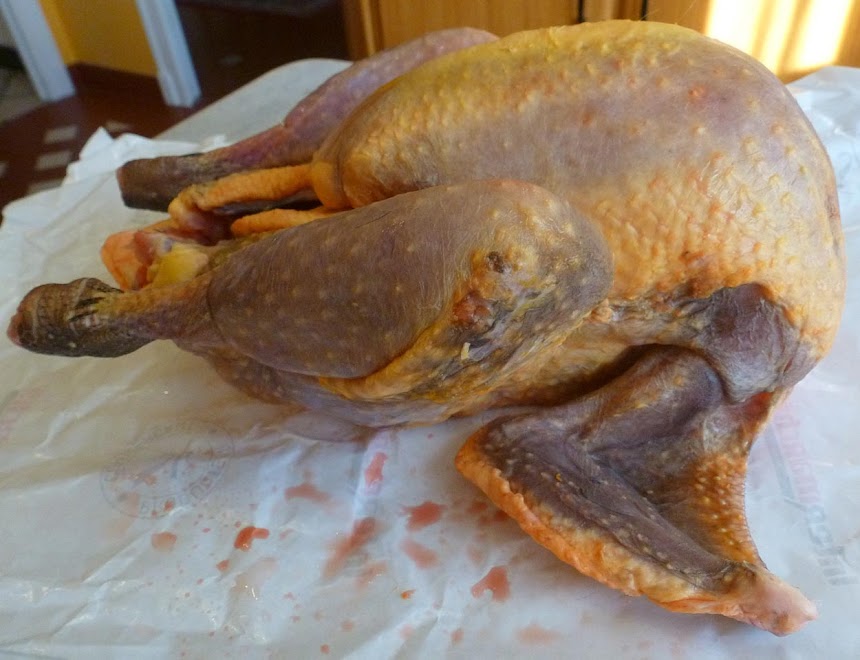 I could have bought a 3 lb. chicken, but then I noticed that one of the supermarkets had nice farm-raised, free-range Guinea hens on sale at a good price. In French, that's called « une pintade » or, if it's a young bird, « un pintadeau ». It's an African bird that's related to the chicken and the pheasant, and some still live wild in in the countries south of the Saharan Desert. France is the world's biggest producer of domesticated Guinea fowl, according to the Larousse Gastronomique food encyclopedia. 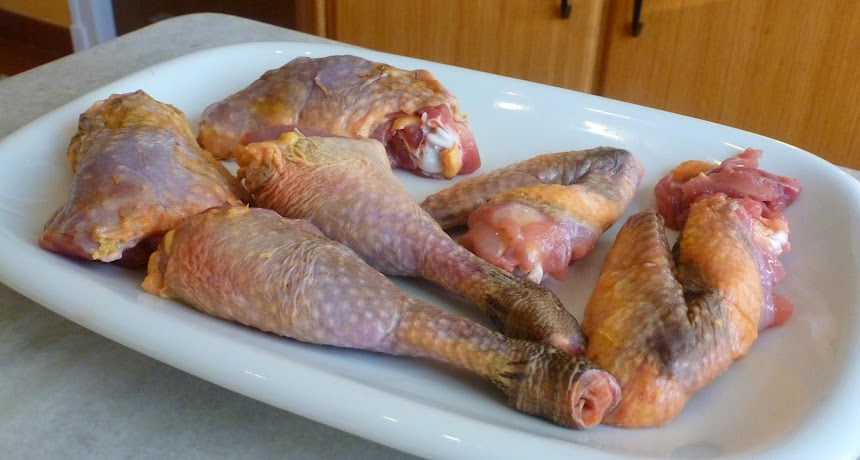 
The pintade I got weighed in at l.65 kilos, which was about perfect for what I wanted to do. Very young pintades are good oven-roasted like a chicken, but the older, bigger birds are better fricasseed or stewed, and Coq au vin is a variant of the classic fricassée. So therefore is Coq au riesling, with its white wine sauce. (By the way, I remember that my grandfather's sister kept Guinea fowl on her farm in South Carolina back in the 1960s, so I was familiar with the species.) 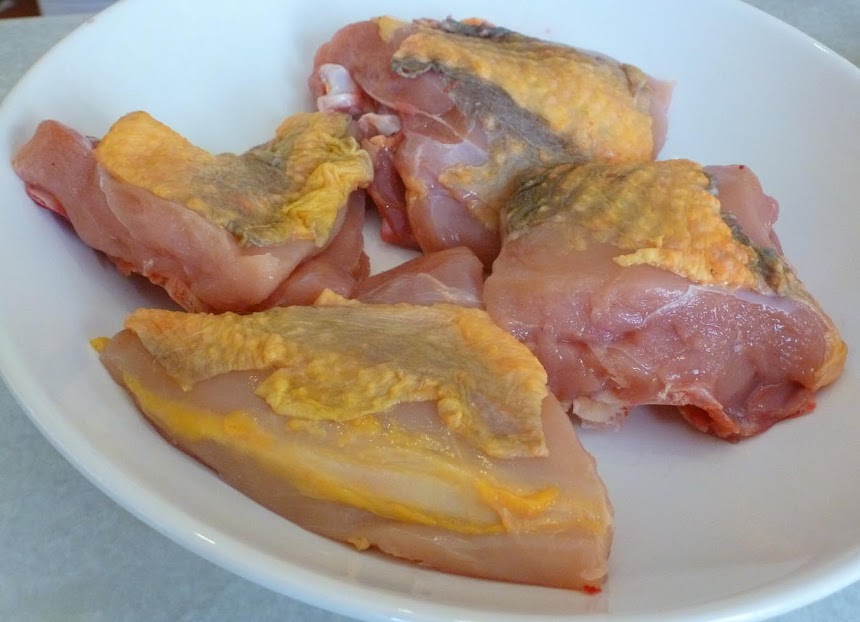 
I was a little nervous about being able to cut the Guinea hen up into serving portions, which is what the fricassee recipe calls for. You cut it up just as you would a chicken, but I had a memory of trying to do that in the past but with difficulty. The bones were harder than chicken bones (especially the breast bone), and the wing, leg, and thigh joints were harder to find and cut into. I shouldn't have worried, though. It all turned out to be pretty easy. You can see that the flesh of the Guinea fowl is all more or less "dark meat" — even the breast. It's delicious — firm and meaty. 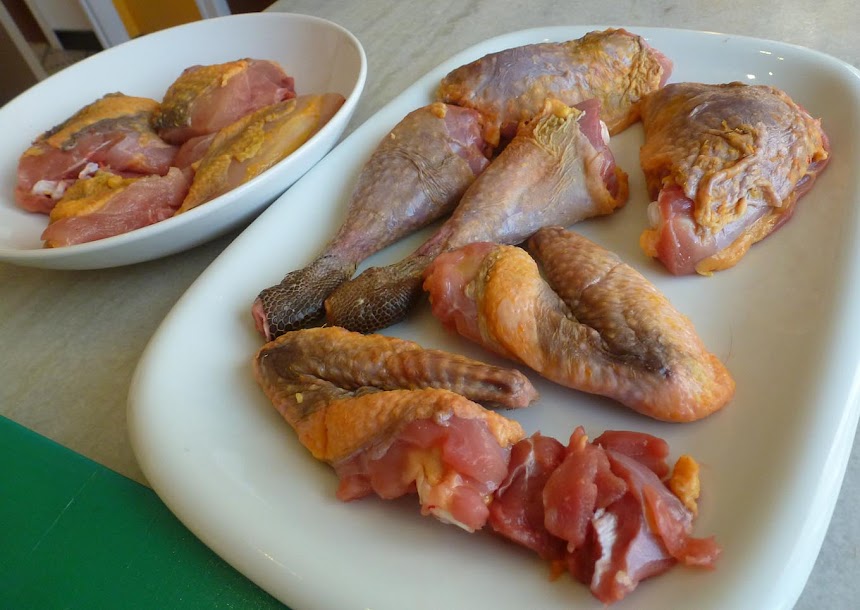 More about cooking it tomorrow...
Posted by Ken Broadhurst at 07:10