And capon day as well. I have to go to the open-air market in "downtown" Saint-Aignan this morning to pick up and pay for the Guinea fowl (chapon de pintade) that Walt ordered last Saturday for our Christmas dinner. We'll cook it tomorrow on the rotisserie (tourne-broche) in our oven. We don't know how much it will weigh, but I'm guessing about five pounds (2 kilos).


Of course it's raining outside. Figures, right? Oh well, the only thing I have to do outside today is the run to the market. After that, we'll be making today's lunch, a cheese fondue, which is called fondue savoyarde in France. The Savoie is an old province high in the French Alps, on the Swiss and Italian borders. So you use Alpine or so-called "Swiss cheese" in a fondue. The ones we'll use are pictured below, and they are all French. They all came from the supermarket. Each carries its own special "quality badge" — IGP (Indication Géographique Protégée), AOP (Appellation d'Origine Protégée), or Label Rouge. 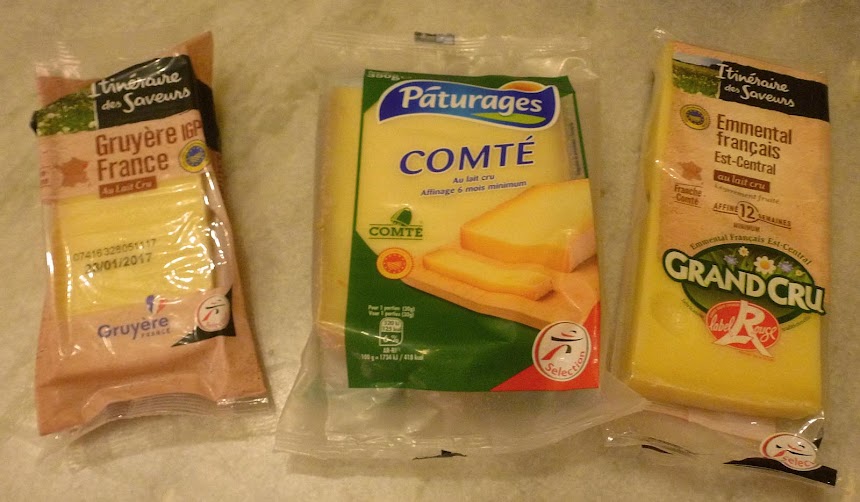 I guess I should have kept the cheeses in the same position for the two photos, but I neglected to do so. So below you have Comté on the left, French Gruyère in the middle, and Emmental on the right. All are made with raw, unpasteurized milk, which is supposed to mean that they have the best possible flavor. Don't expect to find anything labeled as "Swiss cheese" in France. Oh, you can get cheese made in Switzerland, but it will probably be labeled as either Gruyère or Emmental, not with some generic name. Dairies in both France and Switzerland have the right to use those names for their cheeses. 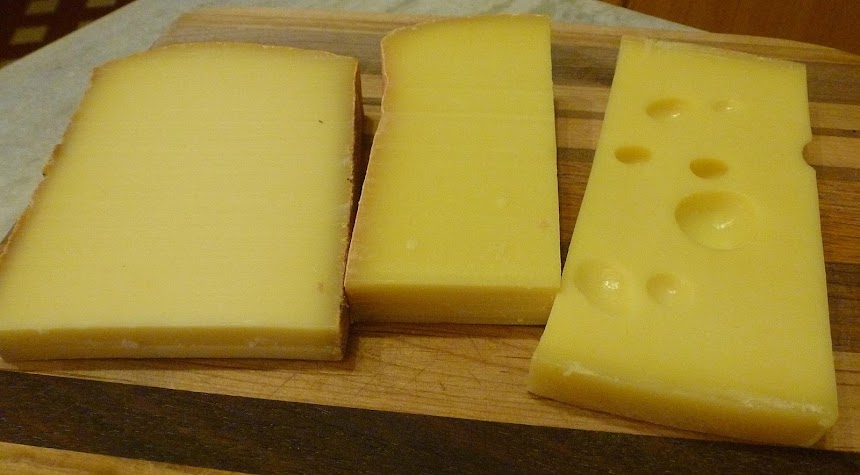 My recipe for fondue savoyard is one that was given to me more than 40 years ago by a friend who had lived in eastern France, in the province called Franche-Comté, which is where both Comté and French Gruyère cheese is made. It's just north of Savoie. The recipe calls for using at least two different cheeses in the fondue mix, and I often use three. Here's the recipe. I guess I should really call it « fondue franc-comtoise » because that's where my friend lived all those years ago.


• 200 grams of cheese per person
• 1 liter of white wine for 2 kilos of cheese
(use a mix of 2 or 3 Alpine cheeses)
• small amounts of garlic, cornstarch, kirsch, black pepper, and nutmeg


Prepare the sauce pan or fondue pot by rubbing it with 2 cloves of garlic. Set the pot containing white wine on a very hot flame or burner on the stove. Gradually add grated cheese while stirring the mixture in a figure-eight pattern.


When the cheese has all melted, add half a teaspoon of cornstarch mixed into a little kirsch (or other clear brandy). Grate in some nutmeg and grind in some black pepper. Then set the fondue pot on its stand, over a flame, at the table. Serve the fondue with cubes of French bread and chunks of fresh apple.


The proportions are kind of complicated, but Walt has made a spreadsheet giving specific amounts of cheese and wine adapted to serving different numbers of people who will be partaking of the fondue. To serve four, for example, you'd want about 2 lbs. (800 to 900 grams) of cheese and about 500 ml (2 cups) of dry white wine.


P.S. A few years ago we bought an inexpensive electric fondue pot, and it is great. The fondue stays evenly hot and smooth during the meal, and there's no burned spot on the bottom of the pot like what you get with "sterno" (alcool à brûler).
Posted by Ken Broadhurst at 07:30