Ou plusieurs, en l'occurrence. What would a holiday meal in France be without cheese? Here's a page out of a different supermarket's Christmas advertising flyer. It's from SuperU in Saint-Aignan, where I went shopping yesterday. By the way, tomorrow we will be enjoying a lunch of what has become our "traditional" Christmas Eve cheese fondue. The three cheeses we'll be using — Comté, Gruyère, and Emmenthal — are made from unpasteurized milk. 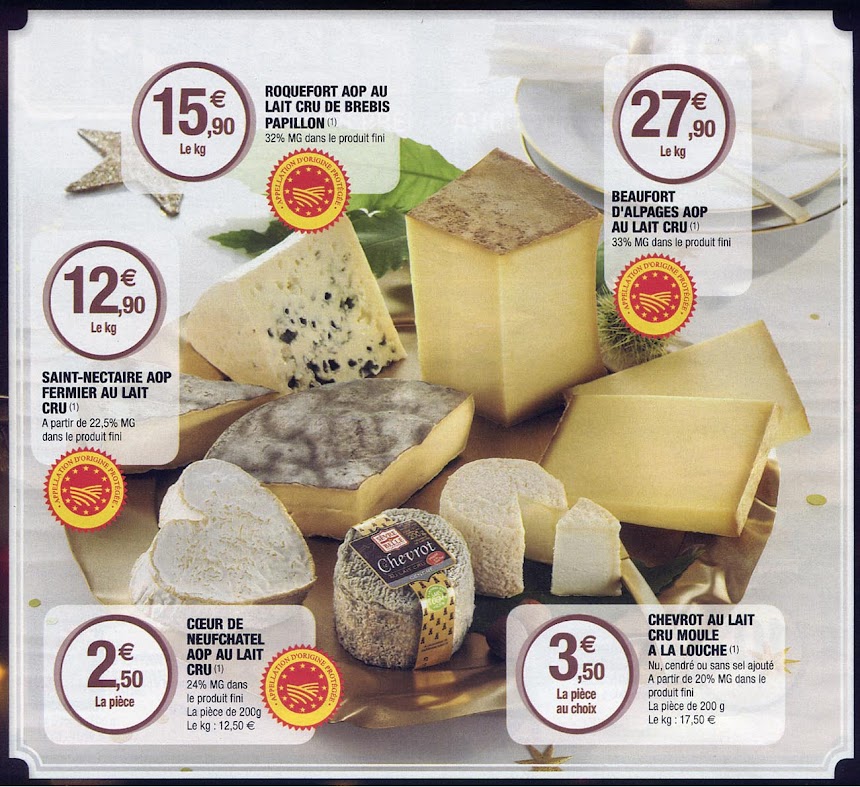 Above,clockwise from the top left, you have these cheeses, all made with raw (unpasteurized) milk — lait cru. For the prices, divide the one listed by 2 to see approximately what the cheese sells for by the pound in U.S. dollars.
The AOP designation on some of the labels means Appellation d'Origine Protégée, which replaces the older AOC label. It is a guarantee that the cheese is produced according to traditional methods in the place named on the label — the genuine article, and not just a knock-off. Cheddar cheese, for example, can be produced anywhere in the world and still be called Cheddar, even though Cheddar is a place in England and "real" Cheddar comes from there. 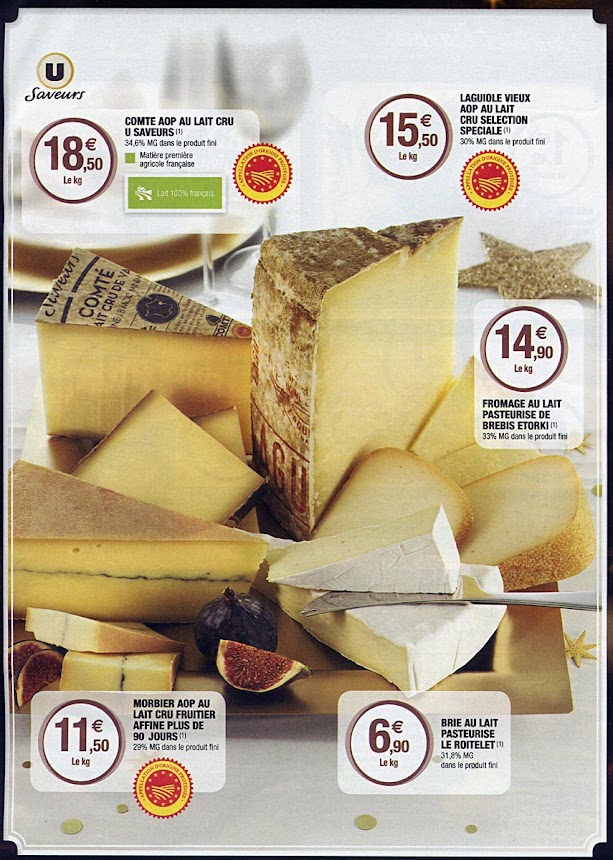 And here are a few more, all but one made from cow's milk, including a couple of cheeses made from pasteurized milk:

The full French meal always includes a cheese course with a selection of cheeses, bread, and sometimes green salad. It comes after the main course and before dessert and coffee. Hundreds of different cheeses are produced by farmers and in dairies all around France.


In each case, the cheese labels above tell you what percentage of milk fat (MG or matière grasse) the cheese contains, as sold. That's a new labeling convention. In the past, French cheese labels specified the amount of milk fat that would remain in a specific cheese if it was completely dried out and all the water was gone. That meant that a Camembert, for example, was described as having 45% MG instead of the 25% the cheese really contains when you eat it. For comparison, French butter contains 82% fat, the rest being milk solids and water.
Posted by Ken Broadhurst at 07:15