Fog is still all the news. Today will be our third in a row of being completely socked in. It's bad in England too. I read yesterday that more than 150 flights had to be canceled at London's two big airports over the weekend. I haven't heard of cancellations in France, but I wouldn't be surprised if some planes have been grounded, given the poor visibility around here. 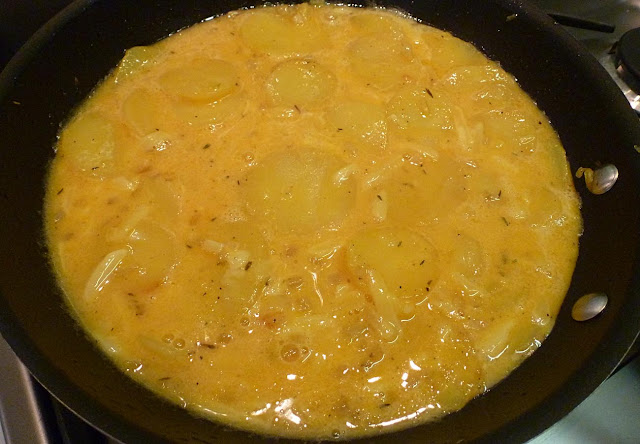 So with no sun in the sky, I found a substitute in the kitchen. It's a Spanish "tortilla" — a potato omelet. I had four or five steamed potatoes in the refrigerator from a lunch I made a few days ago. I sliced those up thinly, and I chopped a small onion and a big clove of garlic. All that went into a frying pan with some olive oil, on low temperature so that the onion would soften but the potato would heat up but wouldn't actually brown. 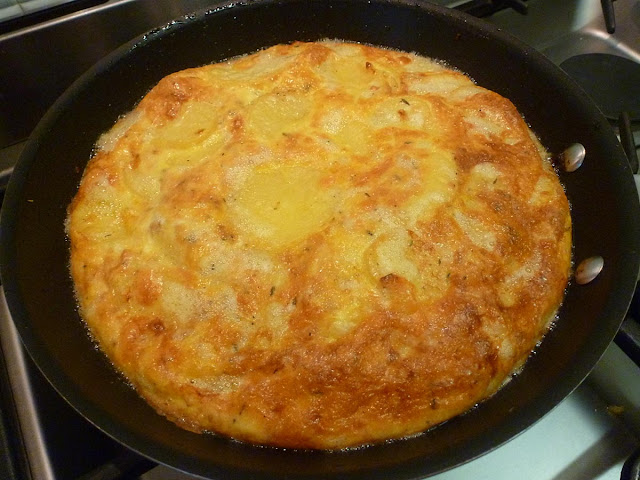 Then I cracked five eggs into a bowl and beat them together lightly with a fork, just to break the yolks up. I deviated from the purely Spanish recipe by adding not only salt and pepper to the eggs, but also about half a cup of grated cheese and a pinch of dried thyme. When the potatoes were good and hot, and the onion was cooked, I poured that mixture into the beaten eggs and stirred everything around gently. The hot potatoes start cooking the eggs. Don't stir too hard because you don't want to mash up the potatoes too much. 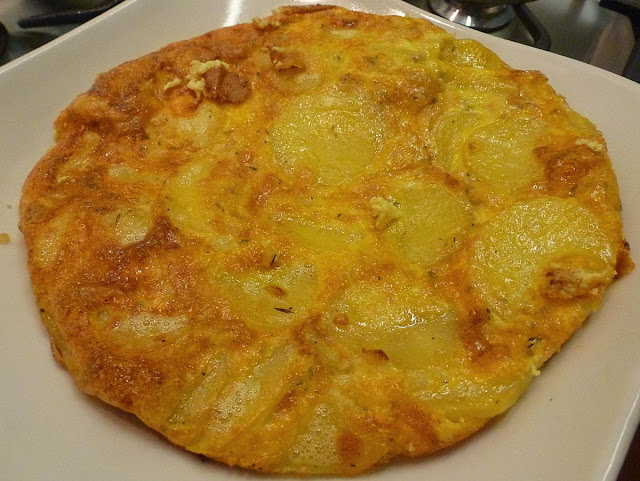 Pour the tortilla mixture back into the frying pan and set it on low heat to cook the bottom of the omelet. Now you have two choices. You can do it the traditional way by sliding the partially cooked omelet out onto a plate and then sliding it back into the pan with the uncooked side facing down. (Good luck!) Let the other side cook. Or you can cheat as I did and just set the pan in the oven on low and wait for the top of the tortilla to brown a little. Then slide it out onto a serving dish. Don't burn your hand on the hot frying pan handle the way I did. Ouch.
Posted by Ken Broadhurst at 07:10