The “getting creative with green beans” series

Walt picked three more pounds of green beans — haricots verts — yesterday. He's been bringing in several pounds a week since the end of July, so we are eating a lot of beans and freezing a lot more. See other recent green beans posts here.


The idea I found in my googling around the web this time was to make what the recipe called « une omelette aux haricots verts ». It's not really an omelet in my book, but a frittata. That's an Italian-style egg concoction that could be called « une omelette plate » — a flat, not folded omelet — or a Spanish-style tortilla made with green beans rather than potatoes. You can serve and eat the frittata hot, warm, or cold, as you prefer.

Usually, making a frittata is easier than making a French-style omelette. The flat omelet doesn't need to be cooked baveuse, or "runny," like a folded omelette. It's less delicate but just as delicious, because it's full of good vegetables and, optionally, meat. The trick in the case of this green-bean frittata is to get it cooked all the way through. It's so big that flipping it over is a challenge. 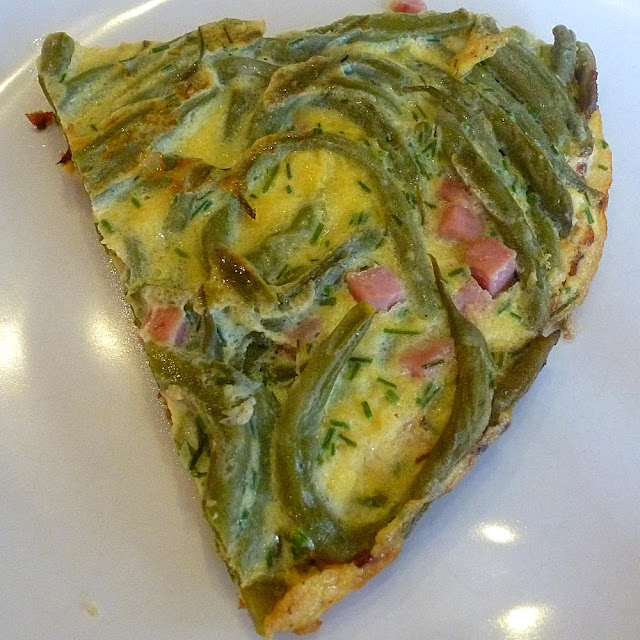 What you do is cook about a pound (I used 500 grams) of green beans so that they are as crunchy or tender as you like them. I cooked them in a steamer for 15 or 20 minutes, making them tender but not mushy. Then you beat together six eggs in a big bowl with salt, pepper, herbs (chives in this case), and a good handful of grated cheese (Swiss, Cheddar, or Parmesan). I added some diced ham. Put the cooked green beans in the bowl with the eggs and mix everything together delicately. Pour the mixture into a hot non-stick skillet with some oil or butter and let it cook on low heat until the bottom is firm and the frittata will slide around in the pan when you shake it. 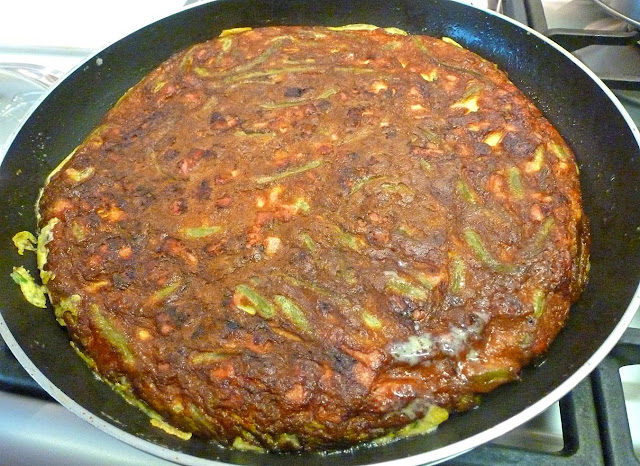 Then you have two options. You can set the pan under the broiler in the oven to cook the top, or you can turn it over and finish cooking it on top of the stove. To do so, slide it out of the pan onto a big plate, the cooked bottom side still facing down. Turn the skillet over to cover the top of frittata, and using mitts or potholders to keep from burning your hands, turn the whole thing upside down so that the frittata is cooked-side up in the pan. Put it back on the heat for a few minutes to finish the cooking. As you can see, one side is browned, and the other side is just barely cooked.
Posted by Ken Broadhurst at 07:00