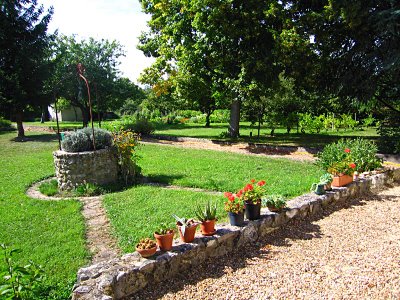 The back yard on 01 Sept. 2006 at 4:16 p.m.
Today was perfect. The sun shone brightly, there was little or no wind, and the temperature hit 26.5ºC — that's about 80ºF. It was a nice day in Saint-Aignan. I got up at about 8:30 and washed some dishes. I drank a cup of tea and then went downstairs and took a load of laundry out of the machine. I hung it out on the line to dry — conditions were perfect for that. 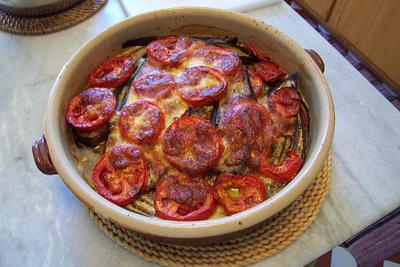 Yesterday's lunch: an eggplant-tomato-mozzarella gratin with garden produce
At about 10:20 the bread lady came by and I bought a baguette. Then I drove over to the Ed store to buy some things — butter, milk, cheese, onions, walnuts, raisins, dishwashing detergent, and a chicken. I also bought some steaks and for lunch we had the French national dish, steak-frites (steak and French-fried potatoes), with a green salad and that good baguette. Along with some good Touraine gamay red wine from our local winemaker, Bruno Denis of the Domaine de la Renaudie. 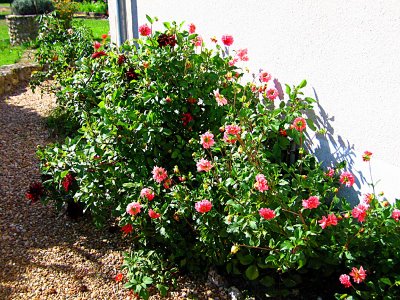 Dahlias on the south side of the house are in full flower.
Meanwhile, back in my home town in North Carolina, tropical storm Ernesto rolled ashore with moderate winds and heavy rains. Some localities got as much as eight inches — that's 200 mm — of rainfall. Here in Saint-Aignan, we had 50 mm, or two inches, of rain in all the month of August. 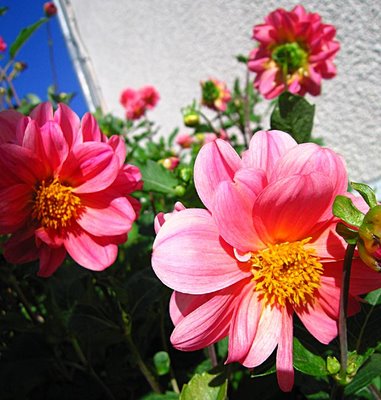 Dahlias against the side of the house and the blue sky
This day of nice weather is making me optimistic about September, but only time will tell whether this month's weather will be better than the last's. News reports here are saying that northern France just lived through it's chilliest August in 20 years. It wasn't frankly unpleasant here in Saint-Aignan, but Walt did build a fire in the woodstove one morning this week. 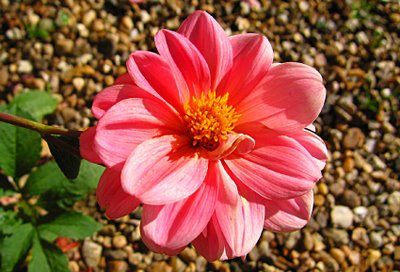 A pink dahlia on a gravel background

This will be a quiet weekend. Walt's going to see Mme Barbier for a haircut tomorrow. Today on the Internet I found a recipe for a tajine of chicken with prunes, zucchini, and almonds. If it turns out to be good, I'll post the recipe and some pictures on Sunday or Monday. The recipe is in French but I'll put up an English version.

Walt is upstairs right now making a tart with some pears off the tree in our side yard. That'll have to be supper.