Do you cook every day?

How has my life changed since I quit work and moved to France? The two biggest differences are: I don't commute any more, and I cook nearly every day. Some of my (our, really) recent cooking adventures are pictured in this topic.

You might be surprised that I don't list "not working any more" as a huge difference in my life. The fact is, however, that I do still work. I shop. I cook. I garden and do yard work. I clean (in San Francisco we had a house-cleaning crew in twice a month, but not here). I do laundry and hang clothes out to dry. And I blog. So my days are as full as they ever were. It's just that the tasks that fill them up are tasks that I choose to devote my time to. 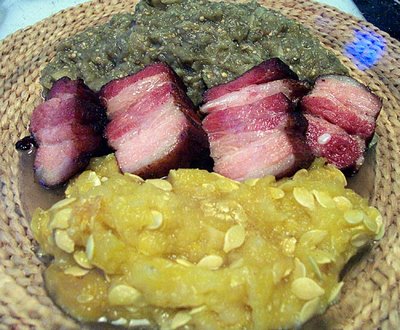 Rillons, a Touraine specialty. It's braised pork breast,
served here with purées of squash and eggplant.
Not only do I not commute any more, but on days when I do go out there's no traffic. Imagine the difference. In San Francisco, I got up early every morning and was on the road by 7:00 a.m. Some days it was stop-and-go for miles and the trip took two hours or even more. One little accident was all it took to bog things down. Other days I would drive at 90 mph for 30 or 40 miles, like a bat out of hell but in heavy traffic on I-280, and I sometimes feared for my life. 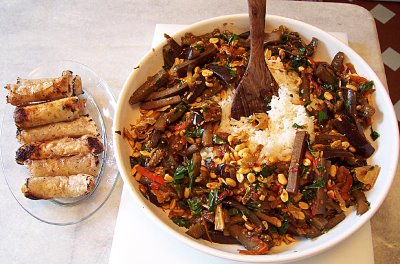 A stir-fry of eggplant and red bell pepper with peanuts and herbs,
served over rice. On the side, home-made egg rolls.
For a while, my commute was 52 miles each way, in Bay Area freeway traffic. Then I changed jobs and the commute was only 25 miles each way. The traffic was still bad. At the end, in 2002, my company relocated and I was again driving 80 miles a day just to get to work and back. That's when I said "Basta! Ça suffit. Stop the world, I want to get off!"

Still, cooking daily has been the biggest change in my life. When Walt and I lived in San Francisco, we both went out for at least one meal a day: lunch. For me, it was most often a salad or a sandwich at my desk. Sometimes a group of us from work would go out to a restaurant. 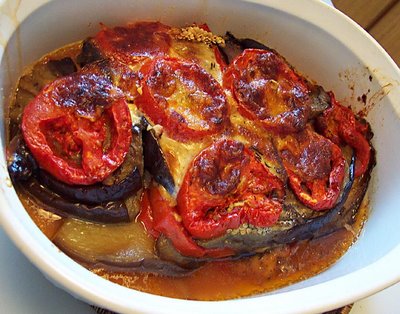 Roasted eggplant and fresh tomato au gratin with mozzarella cheese
Walt and I made it a habit to go out for dinner at least once a week. For a while, we made the rounds of the Top 100 Restaurants as ranked by the food critic of the San Francisco Chronicle newspaper. That was fun.

For a period of months — it was years ago now — we went to dinner at these restaurants with a woman I had worked with in the late '80s and early '90s. It started when we ran into her by chance one evening in a restaurant in San Francisco. It was 1996 or 1997. She said she was trying to eat in all 100 of the restaurants on the Chronicle list in the space of a year. She often dined alone. We decided to join her as often as we could. Sometimes other friends of ours and hers came with us too. 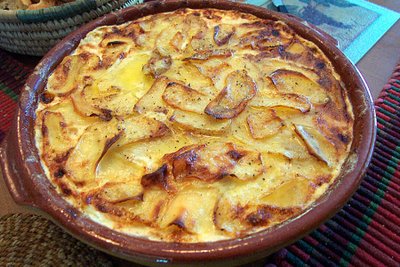 Gratin Dauphinois —
thinly sliced potatoes cooked in milk with cheese, butter, and garlic
After that marathon ended (all good things...), W. and I decided it would be a good idea to go out every Friday night to a nice restaurant in the city. What with commuting, work schedules, and busy weekends just getting ready for the next work week, sometimes we felt we hardly ever saw each other except when there were household chores to be taken care of. Friday nights would be time we could spend together doing something we both really enjoyed doing. 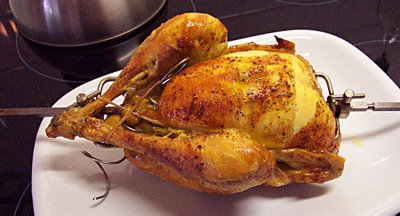 A farm-raised, Label Rouge chicken cooked on the rôtisserie
We focused on French restaurants, of course, but we also tried good Thai, Japanese, and Mexican places. San Francisco is a great place for food. Some of the restaurants we liked were Le Bistro on Nob Hill, Clémentine on Clement Street, Belon, Le Charm, Plouf, Anjou, plus Jeanty at Jack's, Basil Thai, Regent Thai, The Slanted Door, and many more.

On weekends, I would cook, just because I love to cook. We would have food for several nights as a result of the weekend's cookfests. But by Thursday, usually, we would run out of leftovers, or be tired of eating the same things for several days. So we would order a pizza or some Chinese food. We were lucky to have good takeout restaurants in our San Francisco neighborhood. 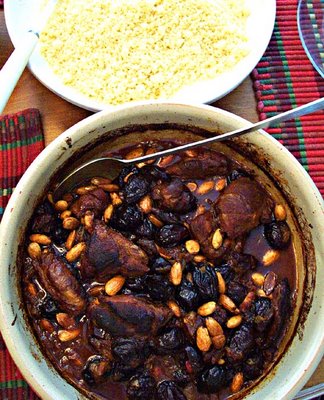 A tajine of lamb with onions, prunes,
and toasted almonds, served with couscous grain
Now I cook daily. There aren't any restaurants in Saint-Aignan that deliver. There aren't any Asian restaurants. There is a pizzeria, and you can call and order a pizza, but then you have to go pick it up. The two of us don't go out much, unless we are in Paris. We no longer have the feeling that we hardly ever see each other — au contraire ! We're at home together seven days a week.

So I (or we) cook every day. Well, there's the occasional "day off" when we've made a plat cuisiné like bœuf bourguignon or coq au vin or a tajine d'agneau aux pruneaux the day before. Or a big pot of soup, or a roast of some kind. Then we have leftovers for a few days. And there are days when we eat pâté or rillettes and cheese with bread and wine. Or a salad — but making a salad qualifies as cooking in my book.

One of the reasons I've always enjoyed living in France and one of the main reasons I wanted to come live here is the universal availability of really good, fresh food products. Vegetables, fruit, and meat that you buy in the outdoor markets or at the supermarket are of very high quality. Not to mention the cheese and bread. Or the wine.

I just couldn't imagine where we could live in America, except in an expensive big city like San Francisco, and still get the good food we love. We were tempted by life in the country. So we sold everything and moved to Saint-Aignan. 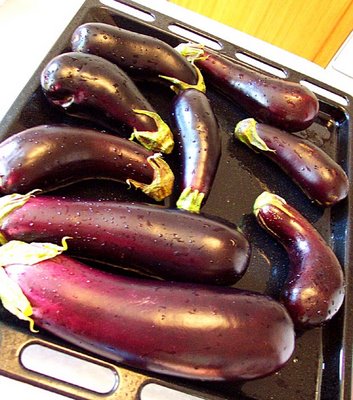 Eggplants ready to be roasted. Prick them with a fork or a skewer
to keep them from exploding in the oven. 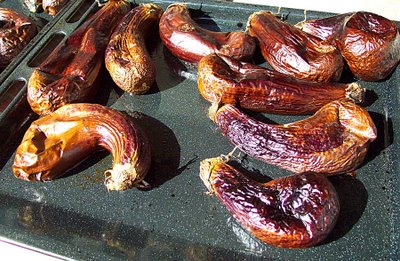 After 30 minutes of roasting, they're all shriveled. 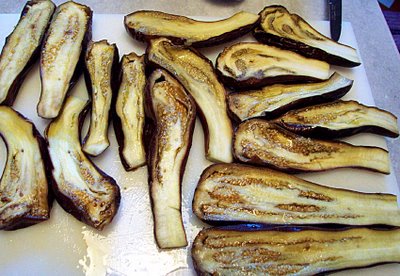 Cut them in half and scrape out the flesh with a spoon.