Saint-Aignan-sur-Cher is in central France. Our region is called Le Centre. We are located south of the Loire River, which is the traditional dividing line between northern and southern France.

Saint-Aignan’s latitude is about 47º25". It’s about 140 miles south and slightly west of Paris, and a little less than 300 miles south of London. 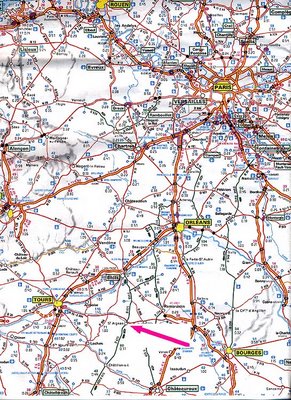 Click the map to see it at full size
We are pretty far north as compared to most of the continental United States. San Francisco is well south of Marseilles, for example. Marseilles is actually a little farther north than Boston. My home town in North Carolina is farther south than the southern tip of Spain.

Here’s a list of some U.S. cities and towns that are actually farther south than Saint-Aignan-sur-Cher:
...and in Canada — remember, these are farther south than St-Aignan:
Because Saint-Aignan is so far north, we have very long hours of daylight in June and July, with sunset around 10:00 p.m. or later. We also have very short hours of daylight in December and January.

Thanks to the Gulf Stream and the influences of the Atlantic Ocean and Loire River, we have a mild climate, with just minimal snow in the winter. The temperature only rarely goes down as low at 20ºF (-7ºC).

Can you tell I’m starting to think about winter? Fall is in the air. And that’s despite the fact that these last few days have been sunny and warm — even hot.
Posted by Ken Broadhurst at 11:57