Emily, this one's for you. 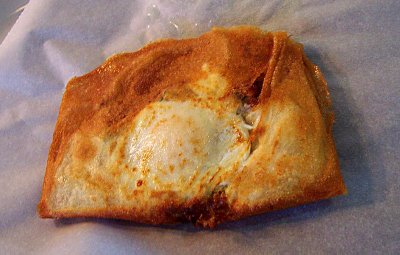 Un brik à l'œuf — a Tunisian turnover with egg, parsley, onion, and tuna
If you don't know Emily, have a look at her What's for Lunch? blog. She lives and works in Paris, and during the week she posts photos of her lunches. Then on weekends, she cooks and posts her photo-recipes of dishes like brik à l'œuf and laksa (a great SE Asian soup).

Inspired by Emily's brik à l'œuf posting, I went to Intermarché earlier this week and bought the basic ingredients: some feuilles de brick (or brik — you choose the spelling you like), a can of tuna, and some eggs. I already had onions and capers. 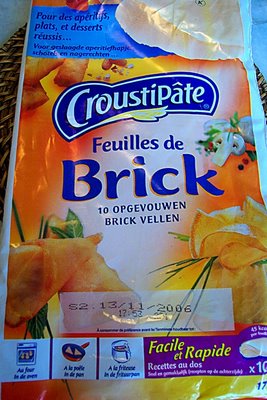 Ten sheets of brik
One of the things I like about Intermarché is that it sells tuna in a big can — three times the size of a normal can of tuna — and at a very low price. You can buy a big can of tuna packed in oil or packed in water for about half what you pay, by weight, for the little cans. So that's what I buy. The quality is good. I prefer tuna packed in water. I can drain it and add my own oil. 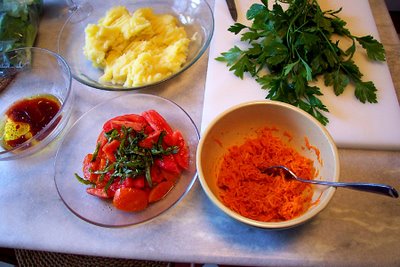 Tomato-basil and grated carrot salads as accompaniments,
along with mashed potatoes and a bunch of flat-leaf parsley for the briks
We like tuna and can eat the contents of the giant economy-size can over the course of a few days. I'm making tuna salad with the rest of the tuna this morning, in fact. Tuna salad in French is rillettes de thon — and it is similar, when you think about it, to the potted, shredded meats called rillettes that they make here with duck, goose, pork, or even chicken. 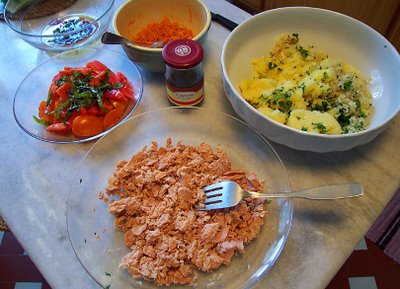 The tuna and the mashed potatoes with minced onion and parsley
So I bought my tuna and eggs and all at Intermarché and I came home and started looking at brik recipes on the Internet. Emily's recipe called for onions, tuna, capers, lemon juice, and eggs. Read it — you'll see. It looks good.

I found a slightly different recipe, called Brick au thon, that includes mashed potatoes in the filling. I decided to try that, because I wanted the brik to be our main course for lunch, with just some salads on the side. 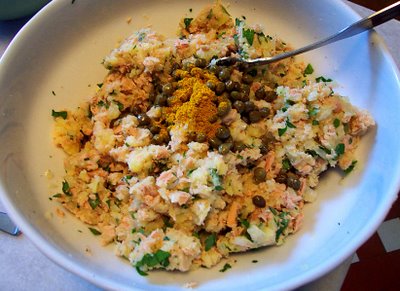 Adding capers and some ras-el-hanout spice to the potato filling
The first step was to cook four fairly big baking potatoes in a covered dish in the microwave. That took about 20 minutes on medium. When they're done, cut the potatoes in half so they will cool faster.

Meantime, chop an onion or two. Put the diced onion in a pan with a little olive oil and some salt and let it "sweat down" — just to soften it. Put in a glug of white wine or even a pinch of sugar to help the onions along. 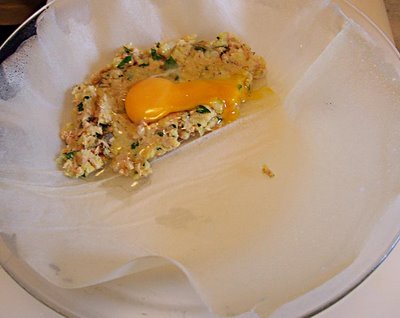 Spread out the sheet of pastry in a big flat bowl or on a flat surface.
This is the one where the first egg squirted out when we tried to move
the whole thing to the pan. We added another egg and tried again.
Chop the parsley and mash the potatoes. Combine potato, parsley, onion, and tuna to make a fairly dry mixture you can use as a filling for the sheets of brik. Don't forget salt and pepper, and add other spices or herbs as you like. I added a pinch of the ras-el-hanout spice powder that I like. You could put in a pinch of curry powder. Or not.

Now the fun begins. Spread out a sheet of brik. By the way, I wonder if phyllo would work for this kind of preparation. Here's an interesting web page about brik. (The author of the page is Sue Nelson!) Put a good dollop of the potato filling toward the center of the pastry so that you'll be able to fold the whole thing into a half-moon shape. Make a little depression in the filling and break a raw egg into it. Fold the pastry over it. 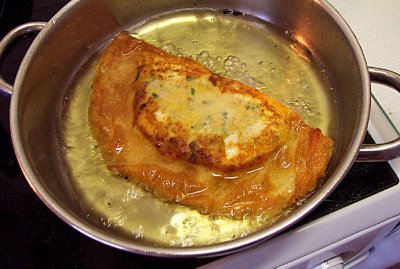 The brik à l'œuf cooking in hot oil
Carefully lift the whole filled half-moon of pastry and put it into hot oil in a pan to cook it. When we tried this we didn't think about the fact that the pastry sheets, which had been folded in half in the package they came it, had kind of split down the middle. We lifted up the first one (the picture at the top of this posting) and the raw egg started bulging out through the crack. But we got it to the pan OK. On that one, I folded the edges over to make it into more of a square shape. 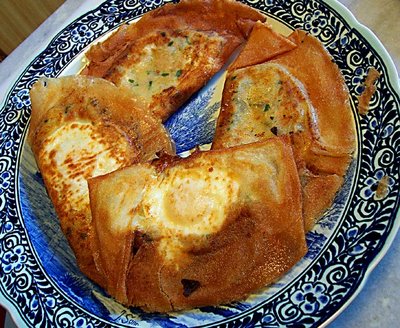 Four successful briks à l'œuf
When we made the second brik and lifted it to put it in the pan, the egg yolk broke and most of the egg white and yolk squirted out and ended up on the floor and all over the sink next to the stove. We just put it back, put in another egg, and lifted it very very carefully to the pan. It worked the second time, more or less.

Here's what the brik looks like when you're successful and when you eat it. The egg white is cooked but the yolk is runny. It makes the potato-tuna stuffing very moist and is great with the crispy pastry. 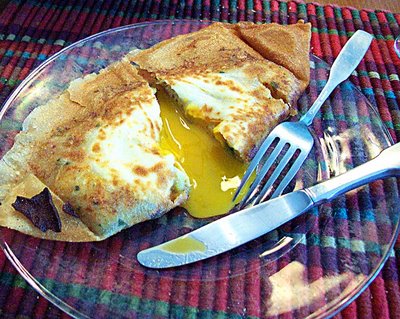 A runny egg yolk like this is the goal
Because we were making several briks and we wanted to sit down together at the table to eat them, I put the briks on a baking sheet in a warm oven to hold them while more were cooking. I guess the oven was too hot, or maybe the briks just sat for too long. At any rate, the second one I ate looked like this. The yolk was set. 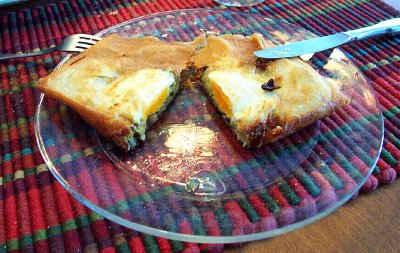 Residual heat or the heat of the overn ended up
cooking the yolk in this one
Over all, the briks were very good, and the potato-tuna filling was, well, quite filling. The turnovers were a little oily though, and making and cooking them was a messy process. We still have some feuilles de brik left, so I guess we'll make some more anyway. Maybe practice will make perfect.