Here's one more recipe before I move on to other subjects. Last week we were in Paris and we went shopping, as we often do, at the big Asian supermarket in the 13th arrondissement called Tang Frères. We can get all the French food we want in and around Saint-Aignan, but when we want exotic food products, we head to Tang Frères. 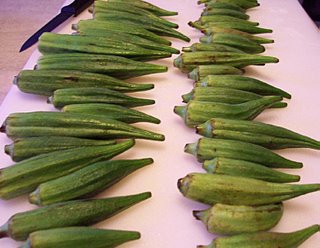 Besides a couple of very ripe mangos, some packages of dried bean curd sheets (haricot caillé séché en feuilles), and some sushi rice and sheets of roasted seaweed (algues séchées grillées) for making sushi rolls, I noticed a package of fresh okra (gombos). Being a reformed Southerner, I couldn't resist okra. What I had in mind was a nice pot of okra and tomatoes, using tomatoes from the garden. We ate okra and tomatoes when I was growing up in North Carolina.

When I got home I looked in some of my Southern U.S. cookbooks to see what recipes for okra and tomatoes they might give. There were surprisingly few. In a book published by Southern Living magazine called Cooking Across the South (1980) there was something called Deep South Okra and Tomatoes, which included bacon, onion, cumin, and garlic along with the main ingredients. 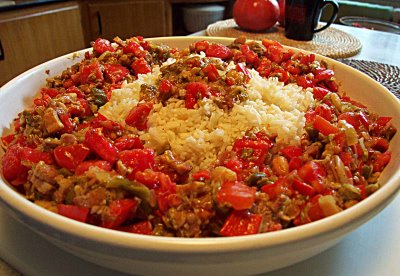 Okra Pilâu with red peppers and tomatoes
But another recipe caught my eye. On the same page was a recipe for something called Okra Pilâu. Maybe it was the circumflex accent on that A that attracted me. Or the exotic name (how would you pronounce "pilâu" anyway?). The fact that the ingredients included green peppers as well as tomato and okra was also a plus. We have a lot of green and red bell peppers in the garden. 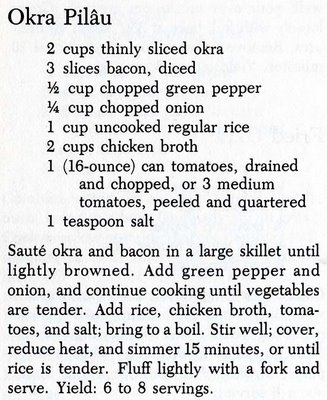 I had red peppers from the garden. We decided early on not to pick the bell peppers while they were still green, but to wait until they turned red. And some had. They're better red, especially roasted, peeled, and marinated in olive oil.

I also had tomatoes from the garden, and wanted to use them. Instead of putting them in to cook down into the sauce, I decided to add them at the last minute so they would be identifiable and fresh-tasting in the finished dish.

I also had a package of French supermarket lardons fumés — smoked bacon cut into matchstick shapes — so that was perfect. I sauteed the lardons in a little butter and oil until they started to brown. 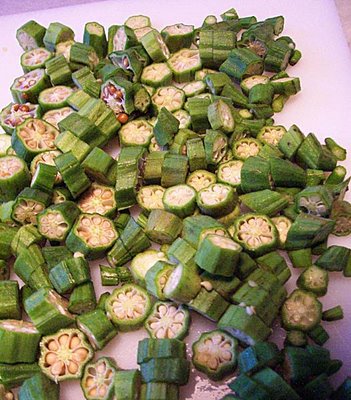 Sliced okra
Meanwhile, I cut the tops off the okra pods and cut the pods into slices. 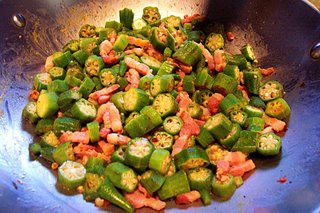 Then I added the okra to the lardons and let all that cook together for a few minutes. It started to stick, so I added a few tablespoons of water and let it continue to cook on low heat.

Then it was time to add the chopped onions and red peppers. All that cooked slowly for a while. I wanted the onions and peppers to be tender but not overcooked, and I wanted to make sure the okra got good and soft, because the pods contained a lot of seeds and can be a little fibrous. Then I poured in some good chicken stock I had made the day before, using the back and trimmings from the chicken that I had cooked as a tajine with prunes. The stock was flavored with fresh ginger, garlic, onion, bay leaves, parsley stems, a clove, and some black peppercorns. 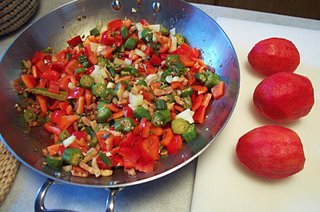 Finally, I added the diced tomatoes and let them heat through. The okra and bacon were well cooked, the peppers and onions were tender but not disintegrating, and the tomatoes were just warm.

At the last minute, I remembered that I had seen a ziploc bag of tiny bay shrimp in the freezer the day before. I rummaged through the freezer, found the shrimp, and added them at the very last minute. They just had time to cook through.

While all this was going on, I had cooked 1½ cups of basmati rice in 3 cups of the ginger- and garlic-flavored chicken stock. I had decided not to cook the okra-peppers-tomato mix with the rice because the vegetables would end up overdone. I told Walt we would treat it as a vegetable stir-fry and serve it over the rice. I supposed that meant it wasn't really a pilâu, but it was good nonetheless. 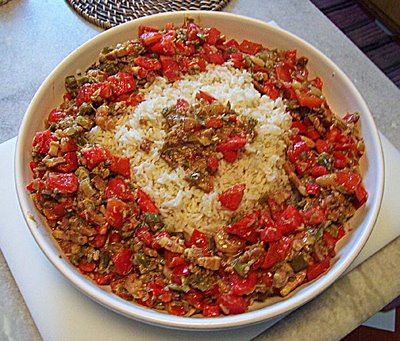 My version of the Okra Pilâu