This is my current version of what we used to call Eggplant Parmesan, but slimmed down and cleaned up. 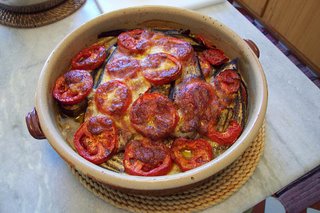 Back in the old days, you would slice the eggplants (aubergines in French and in British English), dip the slices in egg and breadcrumbs, and then fry them until they were soft and golden. That added a lot of fat to the dish. Eggplant Parmesan was made with eggplants, tomato sauce, and parmesan cheese.

At one point a few years ago I saw a French recipe that left out the breadcrumbs but still had you dip the eggplant slices in egg and fry them. I tried that once but I didn't think the egg added anything, and it ended up too rich and greasy. 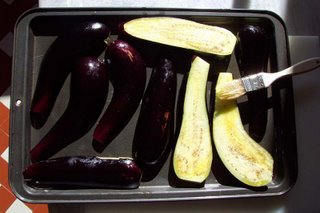 Nowadays, what I do is cut the eggplant into slices 1 cm or even 2 cm (about ½ in.) thick and lay them out on an oiled baking sheet. I use olive oil, and I use a brush to "paint" the exposed side of the eggplant slices with the oil. Then I put them into a hot oven (400ºF or 200ºC) for 15 or 20 minutes. I just have to watch them to make sure they are softening without getting too brown. The top of my oven seems to be a lot hotter than the bottom (c'est normal, non?) and when I made this the other day I had three pans in the oven at one time, on different levels. When the slices are done the way you want them, take them out and let them cool for a few minutes on the pans. 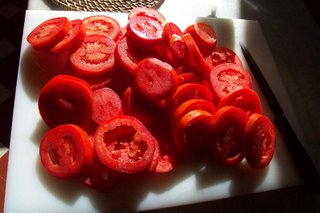 Meanwhile, slice some tomatoes and some mozzarella cheese. Crush and chop a couple of garlic cloves. Proportions don't matter much here — you need about as many layers of tomato as eggplant slices for the dish, and you can put in as much garlic as you like. 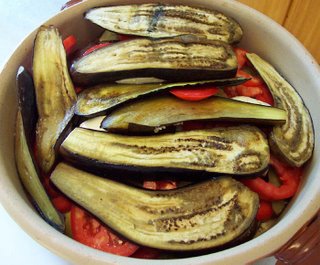 Put a thin layer of olive oil on the bottom of a baking dish. Remove the cooked slices of eggplant from the baking pans with a long spatula and put a layer of them in the bottom of the dish. Put a layer of tomato slices over them. Sprinkle in some salt and pepper, some of the chopped garlic, and a little thyme or other herbs to taste. Dribble on some olive oil if you want. Then put on some mozzarella slices — again, the amount of cheese is up to you. C'est vous qui voyez, comme on dit. 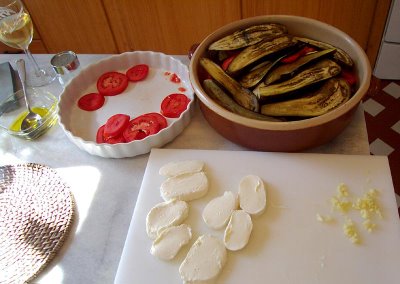 Slices of cooked eggplant, raw tomato, and mozzarella cheese,
seasoned with garlic, herbs, and olive oil
Make two or even three layers this way. Finish with some slices of mozzarella so that it will brown on top. Put the dish in a hot oven (again, 200ºC) and let it cook until it's done the want you want it. 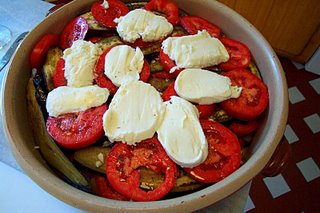 I covered mine after 20 minutes or so, and left it in the oven for an hour, turning the heat down to 160ºC (about 300ºF) when I put the cover on. I was using Roma tomatoes (olivettes) and they were ripe but not very juicy, so I wanted them to cook for a while. And I wanted to make sure the thickest eggplant slices were thoroughly cooked.

The finished dish contained a fair amount of liquid, which happens when you cook eggplant or zucchini in the oven. What I did was use a turkey baster to draw off the liquid (it was a good-flavored broth with some olive oil floating on top), put it in a bowl, and serve it alongside the gratin. You could spoon it on as desired on your plate. 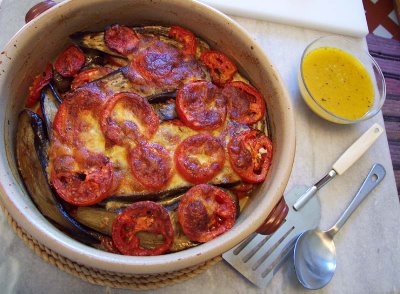