Here's another food topic. It's not a recipe but a method. I thought I was going to get back to my local travel and tourism topics, but I'm not ready yet. 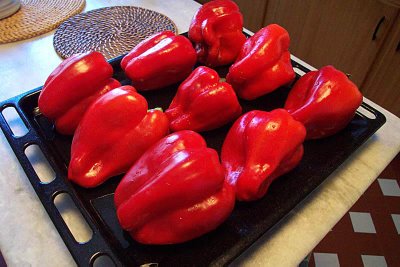 September is when the peppers get ripe.
These are ready to go into a hot oven to be roasted.
In September, the bell pepper crop comes in at La Renaudière. We have had great success growing peppers here. Two years ago, I remember, my mother was visiting in September. One day I went out and picked 6 or 8 red bell peppers (poivrons rouges) and put them in a big bowl on the counter in the kitchen. At some point, I saw my mother in the kitchen carefully examining them. 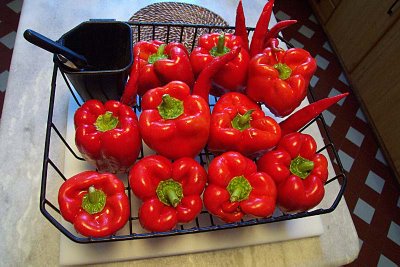 I washed the peppers and dried them in the dish drainer.
"They are so pretty and so perfect I thought at first they were wax or plastic imitations. But they're real. I've never seen such beautiful peppers, son!" she said when she noticed me watching her. 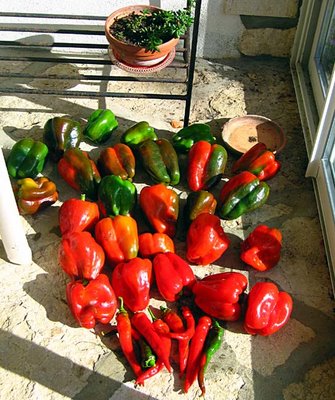 Peppers in different stages of ripeness
This year's crop is amazing. We are growing bell peppers for the third year in a row, and we also put in some long sweet peppers — piments doux in French. We picked 30 of them a couple of days ago, and we've been picking a few all along as we wanted or needed them, and as they started to ripen. So the crop so far has been great.

I prepare them by putting them on an oiled oven pan and roasting them at 260ºC (500ºF — really hot) until the skin blisters and starts to turn black. When we had a gas grill, back in California, we would sometimes cook them on the grill over flames to get the same effect. The idea is to blister and singe the skin without overcooking the pepper flesh underneath. 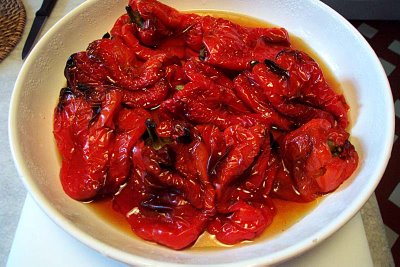 Roasted peppers that have cooled under plastic wrap
Take the peppers out of the oven and put them in big bowl. Cover them immediately with plastic wrap (or just put them in a big plastic bag instead of a bowl) so that steam will build up inside and loosen the skins even more. Let them cool. 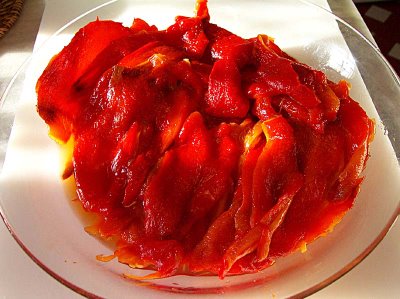 The result is pieces of roasted peppers with no peel and no seeds
When they are cool, the work begins. It's tedious, I warn you. You have to carefully peel each pepper — the skin really should come right off — and then tear thepeeled peppers into pieces and get all the seeds off the flesh. Some of the thousands of seeds tenacioulsy stick to the pepper flesh and you almost have to pick them off almost one-by-one in some cases. Most of them just fall off though. And don't rinse the pepper pieces — you'll rinse away a good bit of flavor.

Save the juice that the peppers release while they are cooking and strain it to remove any stray seeds. If you want to freeze the peppers for later enjoyment, put them in plastic containers or bags and spoon in some liquid. If you want to eat them immediately, or when you thaw the frozen ones, you might put a little of that liquid plus some good olive oil and a few drops of vinegar on them. Not to mention salt, pepper, and garlic. 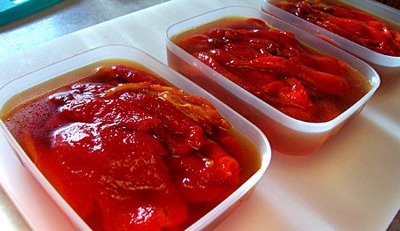 Peppers packed for freezing
The roasted peppers good on bread spread first with goat cheese (a Loire Valley specialty) or cream cheese as a snack or an hors-d'œuvre. And a thousand other ways.