Walt just posted on his blog a topic about our Sunday night dinner with Gabby and Margaret. The tarragon chicken, roasted peppers, goat cheeses, and fig tarts were excellent.

We spent yesterday (Monday) morning getting some details for the rest of G. and M.'s travels sorted out. That involved a trip to the train station over in Noyers (about 4 miles from our house) which was inconclusive. We came back over to the house and did some Internet work to see what train schedules would be best. We found just what G. and M. wanted, so we went back over to the train station and bought the tickets.

After that, we came back to the house for lunch. We had duck and goose rillettes (which are shredded, potted meat that you eat cold on bread with the little pickled gherkins called cornichons). We had goat cheese (of course). We had some roasted red peppers (of course). And we had a green salad with cubed red beets and vinaigrette.

The beets here are sold already cooked and they are really good. At Intermarché, in the produce section, there's a wooden crate lined with heavy paper and containing a dozen or two big fat beets that have been roasted or steamed. There's a big long fork in the crate, the kind you would use in the kitchen to turn over a piece of meat you were roasting. You take the fork, stab a beet, and drop it in a plastic bag. You take it home, peel it (the peel falls right off, actually), and you cut it into cubes or slices. You dress it with mustardy vinaigrette and you enjoy eating it.

For lunch, G. and M. bought a couple of bottles of white wine from the Mâcon region of southern Burgundy. The grapes grown there are chardonnay, but the wine is not aged in oak barrels so it is dry and crisp. It went perfectly with the lunch food.

After lunch, we drove over toward Loches. We went through the village of Montrésor, and then stopped to see three landmarks along the way: La Corroirie, a 12th century farm complex; La Chartreuse du Liget, the site of a monastery that Henri II Plantagenêt had built around the same time; and La Chappelle St-Jean du Liget, a little chapel in the woods that was part of the monastery complex.

Then we drove on to our, or my, primary destination: an area west of Loches that I had only recently read about in the Cadogan guide to the Loire Valley. The guide said there was a village called Chanceaux-près-Loches that had the ruins of a medieval fortress as well as a fancy 19th-century château, along with a nice main street lined with plane trees. It also described a place called Le Lourroux as a fortified village with a 12th-century church tower and a 15th-century barn. 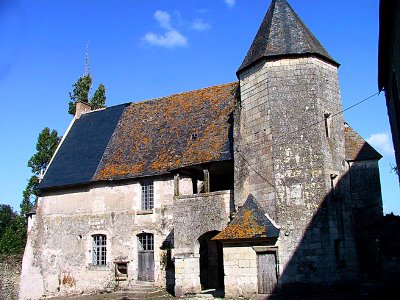 Medieval farm buildings at Le Lourroux — the old roof is covered
with yellow lichens.
This time I didn't get lost, as I had the day before on the way to Amboise. And the weather was fine. The road from Loches to Chanceaux was clearly marked. The village, however, didn't live up to my expectation. The so-called main street was about 100 yards long and was more a country road than a village street. It was lined with tall plane trees, so it was pretty. We saw the fancy 19th-century château sitting in the middle of its park off to the side, but everything was closed up and we couldn't get very close to it. We never did find the ruins of any medieval castle. 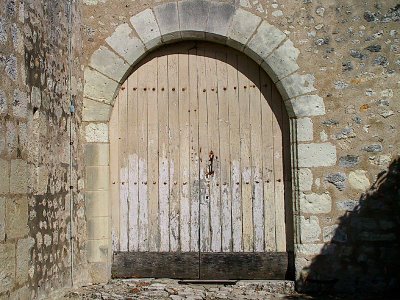 The barn door at the Le Lourroux farm
We drove on to Le Lourroux. The countryside was pretty. We counted cows and saw fields where sunflowers had been harvested but enough were left growing to be picturesque. Other fields were freshly plowed, and still others were green and lush-looking. Le Lourroux was no more than five or six miles from Chanceaux. 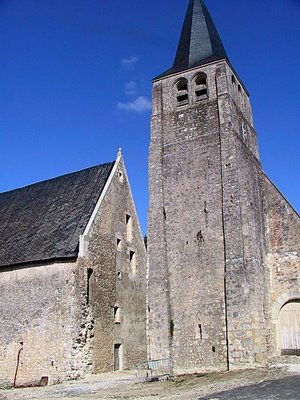 The church tower at Le Lourroux, near Loches
The village didn't turn out to be fortified, however. What was there was an old farm that was fortified, sitting in the middle of a spread-out village full of a lot of newish houses. Everything was spottlessly clean and there were a lot of flowers in the yards and on the windowsills all around. 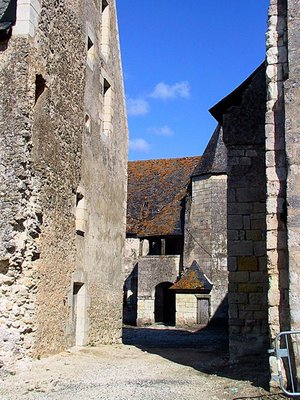 Into the courtyard at the farm
The fortifed farm seemed to be abandoned. Part of the roof of one building looked new, so some work as been done there in the not-too-distant past. The church tower was impressive and stood out starkly against the blue sky. The stone buildings of the complex were austere, and the old courtyard I drove into was paved with worn, broken, uneven cobblestones. It was all very atmospheric, and I took the pictures posted in this topic.

After our time down on the farm, we drove back to Loches and up into the medieval city. We looked around in the church and saw the exteriors of the Logis Royal (the old royal residence, built in the 14th and 15th centuries) and the Donjon (the medieval fortress and towers, dating back to the 11th century). The weather was beautiful, and there were no crowds.

I dropped Gabby and Margaret at their hotel (Le Grand Hôtel de Saint-Aignan) at about 6:00 p.m. I saw their room yesterday. It's very large, with two double beds and beautiful views of the church and château of Saint-Aignan out one window and the Cher river out the other. It has a newly remodeled, large bathroom with a nice shower stall and a tile floor. G. and M. planned to have dinner in the hotel restaurant last night. Walt and I ate the leftovers of the tarragon chicken and polenta.

Here's a panoramic shot of the town of Saint-Aignan.
Posted by Ken Broadhurst at 08:58