Yesterday I picked up Gabby and Margaret at their hotel in Saint-Aignan at 9:00 a.m. for our trip to the big outdoor market in Amboise. Unfortunately, it was raining. It wasn't a real rain — it was more of a mist or drizzle, and according to the weather forecasts it wasn't supposed to last. But there's nothing more discouraging than rain when your plan is to spend a couple of hours wandering through an outdoor market. 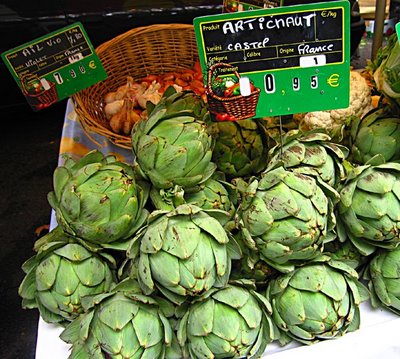 Artichokes at the market in Amboise
Because it was damp out, I figured we didn't need to be in any hurry to arrive at the market, which is about a 35-minute drive by the most direct route. Why not take a more scenic route and wait for the skies to clear? We drove through the wine villages of Mareuil-sur-Cher and Pouillé on the south side of the Cher river, and then we drove on over the one-lane bridge across the river into the village of Thésée-la-Romaine. 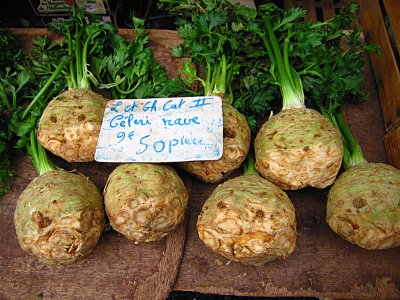 Have you ever eaten celery root?
At Thésée there are 1st-century, therefore Roman, ruins of an old ceramics manufactory. We stopped to see those. We drove on a few miles to the village of Monthou-sur-Cher, where the château du Gué-Péan (the paying ford, as in a place to ford a stream or river) is located. It's on a dead-end road about three miles off the main road, and on a misty gray day it appears to materialize out of nowhere in the middle of a green valley surrounded by forest. 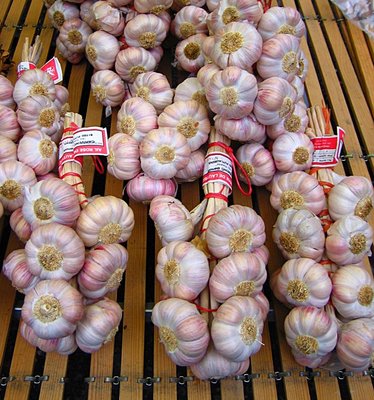 Needs more garlic, maybe?
After that, we drove on over to the town of Pontlevoy, where there is a big old abbey church. Instead of taking the road I know so well to go on to Amboise, I decided to take a detour through the town. I knew I could make a left turn a little ways in and get back on the road to Amboise. 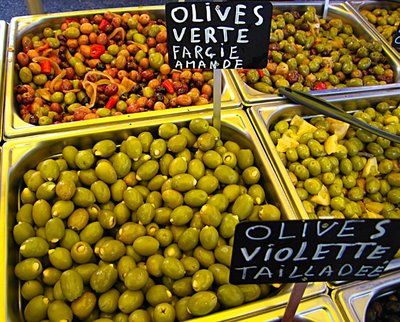 Olives are good at apéritif time
In the rain — it was falling harder now, and truly was rain, as the steady swipes of the windshield wipers proved — I of course missed the turn. We were on the road to Blois. Visibility was limited, and the clouds were so thick that even at 9:30 a.m. it seemed like late evening.
OK, I'll turn here, I said to G. and M., and this will get us back to the road we want to be on. I turned left, passed a couple of houses and then a farm, and found myself on a one-lane track going across flat fields that had recently been harvested. I was confident this little track would join up with the main road just mile or two on. 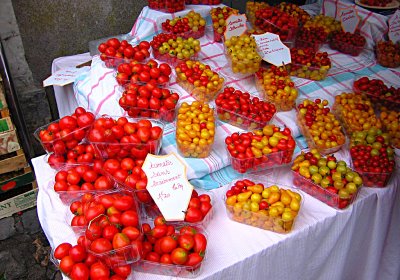 Cherry tomatoes
The road curved and curved, but I continued as the rain continued to fall. It wasn't getting any lighter. I came to a fork in the road, and as Yogi Berra advised, I took it. That is, I veered off the left, because that seemed to take us westward rather than northward.
A kilometer farther on, we noticed a big house on the right-hand side of the narrow lane, and then suddenly the pavement ran out and we were on a gravel path. It was wet, of course, with significant puddles. It didn't seem like a good idea to try it.
Gabby got out the map, and we stopped and studied it for a minute. None of the signs we had seen pointed toward any town or village on the map. So there was no choice but to backtrack. I did, and at least I was able to remember where we had come from. At a certain point, rising out of the mist I saw a grain elevator that I recogized as the one on the Amboise road leading out of Pontlevoy. I turned right, and very soon we came to a bigger road. I turned right and there was immediately a fork in the road, but this time with signage. Amboise left, Chaumont right.
We headed toward Amboise and the rain became just mist again. Vallières-les-Grandes and Souvigny-de-Touraine were right where they ought to have been (thank goodness), and at Souvigny I turned right onto a road that leads down into the Loire river valley. We coasted down the hill through some woods. The rain stopped and the sky lightened. And then there was the river, wide, flat, and low, right in front of us. We turned left on the river road and were in Amboise in 5 minutes' time. It was about 10:30. 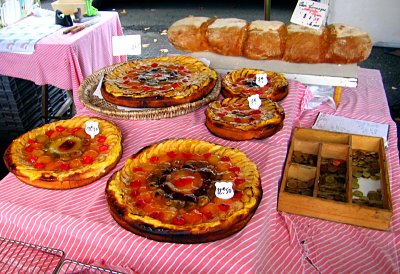 {Parenthesis} It really is starting to feel like fall, or even winter, now. In summer it stays light until 11:00 p.m., and I'm hardly ever out in the dark. This past week, I've been out driving around in the dark (and I include yesterday morning in that) a couple of times. On Thursday night I was following my English friends home on a familiar road in Saint-Aignan when out of the dark, caught in the headlights, a group of gendarmes appeared waving flashlights and telling us to pull over. I thought it was a routine traffic check, but it turned out we were going the wrong was on a one-way road. With all the road work and detours around Saint-Aignan right now, some roads that weren't before have now been made one-way. You have to be really careful, especially at night when the signs are harder to see. I hate that sinking feeling you get when the cops pull you over — don't you? Luckily, after the gendarmes asked some question and checked our licenses, registration cards, and insurance papers, we got off with just a warning. {Close parenthesis}

At Amboise, we quickly found parking in the big crowded lot under the shade of rows of platanes (plane trees, so typical of France). We walked into the market where all the flowers and potted plants are being sold, and it was a festival of colors. The mist had stopped, the sky was getting bright, and the sun, even, was beginning to peek through. 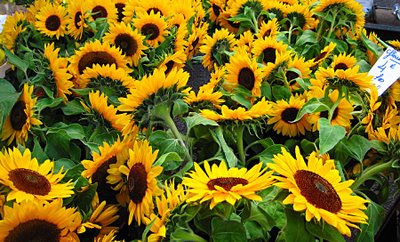 First there was rain, then there were sunflowers.
And then we wandered through the food stalls. That was what Gabby and Margaret wanted to see. After the gray gloominess of the morning's weather, the colors, sounds, and smells of the market were fantastic. We wandered from stand to stand, looking for free samples! The saucisson vendors were a good bet. They were all slicing off pieces of sausages and salamis and handing them to passersby in an effort to get people to buy some. 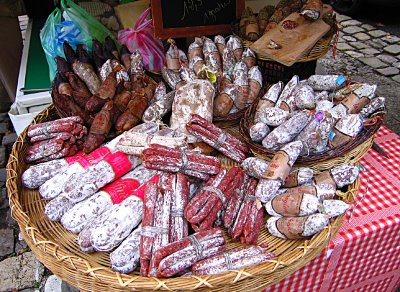 Saucissons et saucisses
Here was a plate of goat cheese slices set out for the tasting. And here some grapes or some olives. At one stall, Gabby picked up a bite-size pastry stuffed with sausage meat that she found in a little dish on a baker's counter. "It's good with the stuffing," she said. "Try one." I did, and it was good.
Margaret walked up and Gabby told her to grab one too. When M. reached out, the woman selling baked good saw her and said: "Hey, those aren't for tasting! They're 40 cents apiece." Uh-oh! 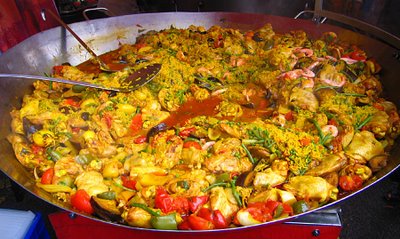 A lot of the local people must have paëlla for their Sunday dinner.

We bought some grapes, a little melon, a few peaches, and some olives. We mostly just looked at all the fish, meat, and vegetable displays, figuring out what things were called. Gabby's French is good, and she likes learning new words. The market wasn't nearly as crowded as I've seen it in the past. I supposed the morning's drizzly weather had kept some people away, though it was sunny and nice by the time we finished our perusal. It was all very pleasant.
After Amboise, we headed over to Vouvray, stopping to taste some wine in Montlouis along the way. At Vouvray, I headed, as usual, straight to the Aubert wine cave in the area called La Vallée Coquette. It's rustic, agricultural, and always open. The wine is excellent. We tasted some dry vouvrays, a 1998 and a 2004. G. and M. bought a bottle of each, and I bought three bottles of sparkling vouvray for Walt. It's what he likes. 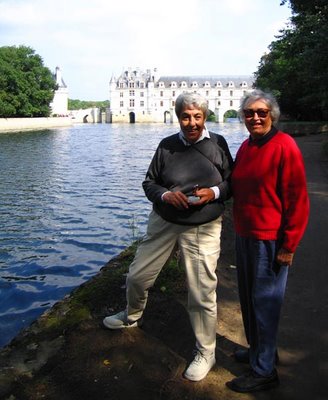