We've been looking for a good couscous restaurant in Paris since one we found just last March called La Rose des Sables suddenly went out of business in June. We tried one called L'Oasis near métro Convention in late June, and it was OK but not excellent.

Yesterday we were in Paris with our friend CHM. We had found recommendations for two couscous restaurants. The first is called Le Gourbi and is located on the rue des Plantes in the 14th arrondissement. I called and it turned out Le Gourbi is closed during the month of August. Walt and I will try it the next time we get to Paris. 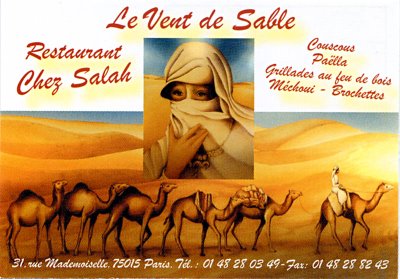 The other restaurant, which we saw featured on a French TV show called Carte Postale Gourmande a few weeks ago, is called Le Vent de Sable (which means "the sandstorm" in French). It's located on the rue Mademoiselle in the 15th arrondissement, near métro Commerce. 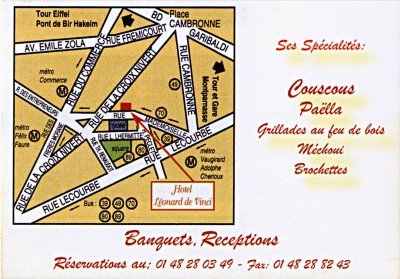 Well, it was excellent. Le Gourbi may be a good restaurant too, but we ended up being glad it was closed because it was our first choice. If it had been open, we would have missed out on Le Vent de Sable. The specialty at this excellent restaurant is a couscous au méchoui — méchoui is lamb roasted on a spit over a wood fire. That's what we had.

If you don't know what couscous is, this will give you an idea:

You make a big pot of broth using tomatoes, onions, celery, and other vegetables as you want: turnips, carrots, zucchini, eggplant, green beans, or chunks of winter squash, for example. In the broth you cook lamb, chicken, beef, or any combination of all of them.

You make a batch of couscous, which is a form of wheat pasta that looks more like millet than anything else. You serve the meat, vegetables, and broth over the couscous and you garnish it with cooked chickpeas and dry raisins, along with a good amount of the hot chili sauce called harissa. You can also serve a few merquez sausages, made from lamb and beef, on the side. 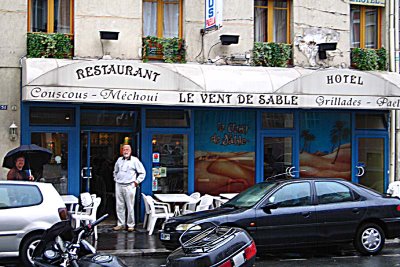 Lunch at Le Vent de Sable — 31, rue Mademoiselle, Paris 15e
Or you go to a good couscous restaurant like Le Vent de Sable. Order a bottle of Algerian or Moroccan red wine to go with it. You won't regret it. Click on the check above to see how reasonable it is. Dahra, by the way, is a red wine from Algeria.

Another good couscous is the one served at L'Atlas, on the boulevard St-Germain in the Latin Quarter, near the well-known Chez René and Tour d'Argent restaurants.
Posted by Ken Broadhurst at 10:17