Back to July 15. CHM and I were in my car, driving south from Yèvre-le-Châtel, following Pierre and Marthe in their car toward the town of Combreux, where we had reservations for lunch. Suddenly, just as we turned a corner in a village next to the church, Pierre pulled off the road onto the shoulder. I did the same, figuring we had made a wrong turn and would need to backtrack. 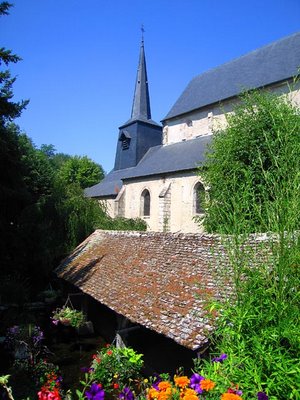 Village lavoir located right next to the church.
But no, Marthe had spotted a lavoir, an old wash house. I don't even remember what village we were passing through. It might have been Boiscommun. Or Courcelles. For a minute just now I thought I had found it on the web in Sury-aux-Bois, but now I'm not sure. Anyway, it's in a village just west of Bellegarde and just north of Combreux. I'll have to go look for it again the next time I'm in that area. Maybe CHM will remember. 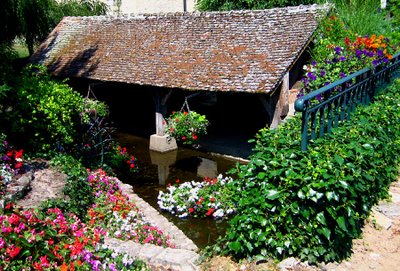 This lavoir has been decorated with plantings and pots of beautiful flowers.
A lavoir is a wash house. It's where people went to wash their clothes and linens in the days before washing machines (which is not really that long ago). Usually a lavoir is a covered structure built on the banks of a river, stream, or canal. Women (who undoubtedly did by far most if not all of the laundry) carried their dirty clothing and linens as well as the necessary equipment down to the lavoir on laundry day. Remember, houses had no running water. There was a well, and maybe a pump. There was no electricity. 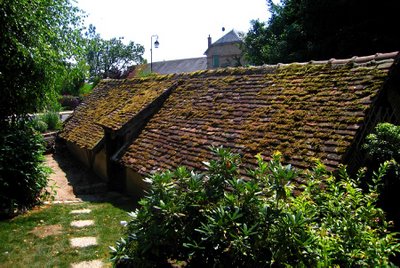 The roof of the lavoir, which in this case is a fairly big building
I found a long description on a web site in French. Here's my translation:

Before I take you back to the years between 1946 and 1950, which is when I had the experiences I'm going to tell you about, doing the laundry, you have to remember that back then there were no disposable paper products. Everything was cloth. No throw-away paper tissues or paper towels. Absolutely everything had to be washed, even cleaning rags. And there were no mechanical devices to do laundry; it all had to be done by hand. As a result, people put on clean clothes just once a week — that's just the way it was. On Sunday, the members of the household changed their clothes, taking off the dirty ones they had worn for seven days, including the men's shirts that had soaked up all the sweat of the hard labor required of them in those days.

That said — young women, listen carefully — it took two or three full days of work to get the laundry done. I loved laundry days, myself. The day before, my grandmother would sort the dirty laundry, thrown into a pile or sometimes put up to hang in an outbuilding for weeks on end so it wouldn't get moldy. It's true. We had enough clothes to get us through. Grandma put the whites — all the household linens were white — into a big tub that we filled with water, hauling it by the bucketful from the well, and threw in two or three big handfuls of soda crystals. That was called soaking the laundry. And then there were what we called Grandpa's "Russian socks" — they were rags that he wrapped his feet in and wore inside his big old workboots. They stank to high heaven. Grandpa said they were good enough for everyday wear. If he said so... 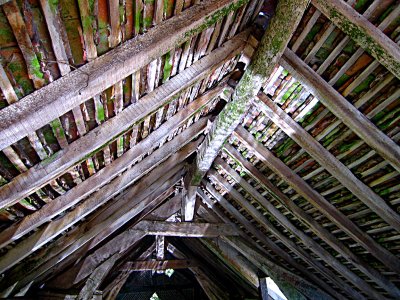 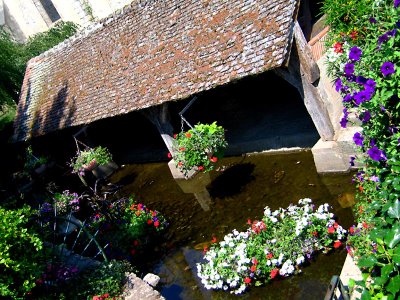 Another view of the flowery lavoir
My mother has told me that when she was a girl in the 1930s and 1940s laundry day was Monday at her house and she had to do a good part of the work. By the time I was coming along in the 1950s, people had washing machines — the kind with wringers at first, more recognizable ones later. But Ma still did a good amount of laundry in the bathtub on a washboard. 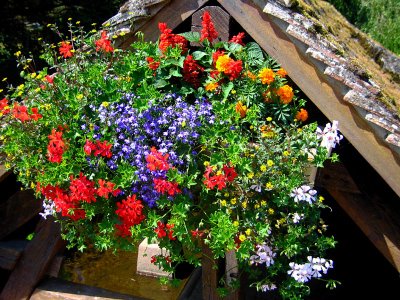 Sprays of potted flowering plants
Most villages in France have a public lavoir like the one in these pictures. Most of them aren't so dolled up, of course. Around here, there's one in Montrésor, south of us, and one in Choussy, to the north. If there is still one in Saint-Aignan, or in the neighboring villages of Mareuil and Seigy, I haven't found it yet. Then again, there is a new laundromat in town.

And then there's this lavoir in the town of Châteauvieux, just southeast of Saint-Aignan. My friend Marie will recognize it, and I dedicate this topic to her today... She knows why. 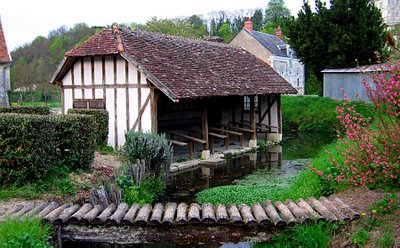