You probably know the order of the courses in a French meal:
The supermarket ads follow the same order, more or less. So at the end of the 12-page flyer, you see ads for cheeses and desserts. 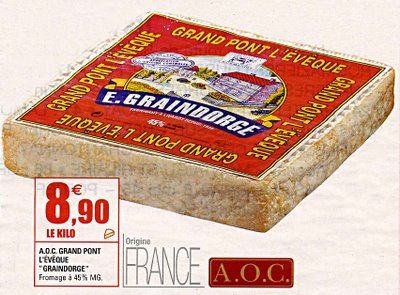 Pont-l'évêque is a cow's milk cheese that is made in lower Normandy in a town of that same name. Pont l'évêque means "bishop's bridge" in old French, where the de to indicate possession was not yet used. Other examples include towns near Paris named Bourg-la-Reine (Queen's Burg) and Bois-le-Roi (King's Wood).

According to the Larousse: Les Fromages book, pont-l'évêque (pon-lay-`veck) cheese has been produced since at least the 12th century and was created at a monastery. It was given its current name "only" toward the year 1600.

Robert Courtine, the author of the Larousse cheese book, says that ideally, pont-l'évêque is a yellow, sweet, and unctuous (i.e. soft and rich) cheese with a taste of hazelnuts. If it gets over-ripe, however, it risks becoming bitter.

You'd have to taste it fresh, in Normandy, to know how good it can be. Cheeses imported to the U.S., because they have had to travel a long distance and because they sit on the shelf too long after arrival, are often not as good as they should be... in my experience.

The cheese in the Intermarché ad is on sale for about $5.25 a pound. I can't tell how much one cheese like the one in the picture would weigh. I'm going to Intermarché this morning, so I'll look. 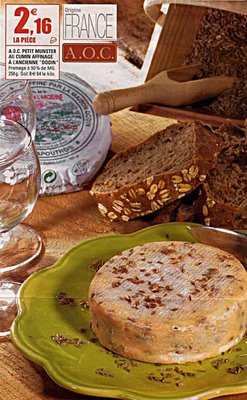 Intermarché also has two munster cheeses on special this week. Both are A.O.C. (as is the Pont-l'Évêque), and that means Appellation d'Origine Contrôlée. A.O.C. products, which include wines, cheeses, and more, are produced under very strict regulations that include controls on what raw materials (milk, grapes, etc.) they can be made from, where they can be produced (champagne can only be produced in Champagne), and how they are processed (no short cuts). For example, grapes grown to produce A.O.C. wines cannot be irrigated. 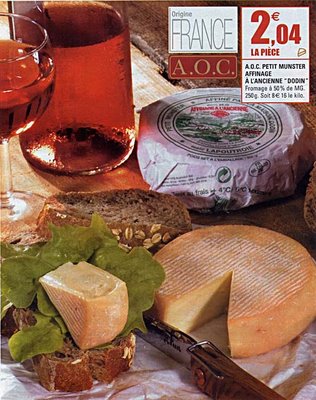 I don't really know what differences there would be between these two munster cheeses. But the Larousse book says that the munster appellation was created in 1953. Munster as defined is a soft round cow's-milk cheese from 15 to 18 centimeters in diameter and 3 to 6 centimeters thick, with a maximum of 45% butterfat. The production area extends through the valley of the Munster river, on the Lorraine side of the Vosges mountains, including the villages of Remiremont and Gérardmer. That gives you an idea...

Like pont-l'évêque, munster cheese was created in the monasteries in what is now the production area. But it is older — it dates back to the 7th century. As early as the 14th century, munster cheese was known "throughout the kingdom," according to Larousse. Today, some munster is still made by farmers, but much of what we get is produced in industrial dairies.

The two munster cheeses advertised by Intermarché this week are selling for about the same price as pont-l'évêque: $5.25 a pound. So a half-pound cheese like the ones pictured goes for about $2.60. 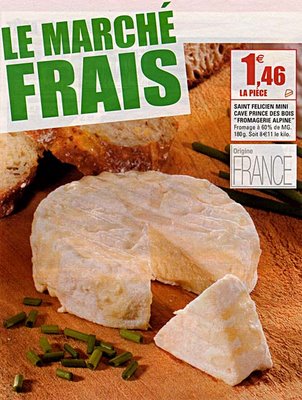 OK, what about dessert? What about a strawberry pie? This one is selling for about $4.15 a pound, with translates to just over $7.00 for the whole pie. It was transformée en France — "transformed" means made into a pie, I guess. It doesn't say where the strawberries were grown. A lot are imported from Spain, even though France produces a lot of strawberries too. The general opinion here is that the French ones are better (what a surprise!).

But watch out. The fine print on the ad says that the strawberry pie has been frozen and then thawed and stored at 4ºC (38ºF). So you can't re-freeze it. You have to eat it. Is that a problem? 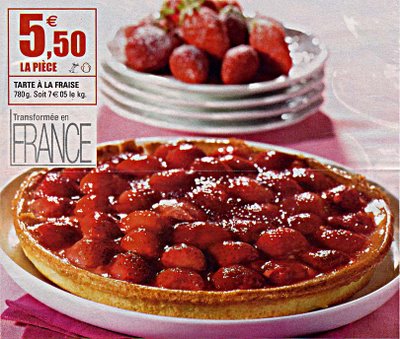 If you don't want strawberry pie, you can choose a tarte normande. When it says normande, it means it is made with apples and cream (and probably butter). The apple tart is advertised as Origine: France. Evidently, it hasn't been frozen and thawed before sale. 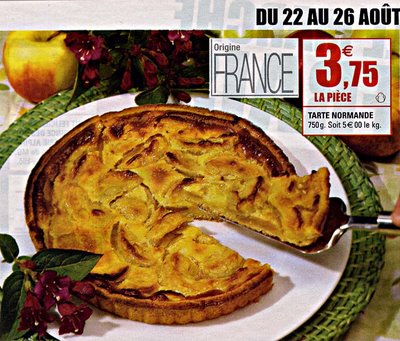 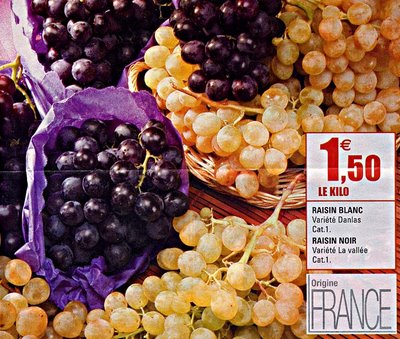