France and many other European countries adopted the euro as their currency starting January 1, 2002. The euro is closer in value to the dollar than the French franc was, so for Americans euros are easier. 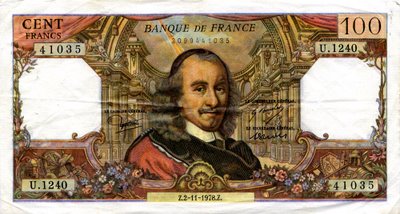 This a 100-franc note from the 1970s. I found it tucked in with
some old photos I was sorting through this morning.
The man on the bill is the classical playwright Pierre Corneille.
More importantly, France, Spain, Italy, Belgium, the Netherlands, and Germany, to name just some of the euro countries, now all use the same currency. It's no longer necessary to change money when you go from one of these countries to another. And you can easily compare prices from country to country. That's progress, I think.

My first trip to France was in 1970, when I was 20 years old. For 32 years, the franc was the official currency, and I was comfortable with its value, its denominations, the look of its bills and coins. In general, the franc was worth about $0.20. In other words, $1.00 was worth 5 FF (five francs). 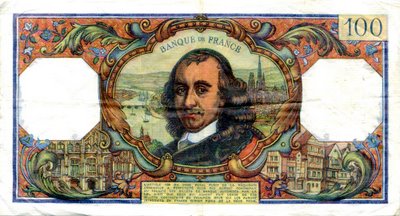 Here is the flip side of the same 100-franc note. I remember that in the '90s
I tried to use it to pay for drinks in a Paris café one day. The waiter said
it was no longer legal tender, but he was very interested in examining it.
He called it a « monument historique ». Corneille was from Rouen, where I
worked for a year in the early '70s, and that's Rouen's cathedral on the bill.
That value fluctuated over the years. I remember that in 1970 the dollar was worth 5.6 FF. And in the late 1970s there was a time when it was worth only four francs. In the 1980, when France elected Socialist François Mitterrand president and the U.S. elected pro-business Republican Ronald Reagan, the franc crashed and the dollar soared. $1.00 was worth ten francs for a while there. Americans in France were flying high. 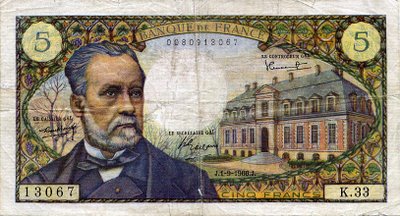 This five-franc note was the equivalent of a dollar bill when I was a student
in Aix-en-Provence in 1970. I saved one as a souvenir. The five-franc note
was taken out of circulation in the 1970s and replaced by a five-franc coin.
Officially, 1€ (one euro) is worth about 6.5 francs. And right now one euro is worth about $1.30. That seems like a pretty bad exchange rate for Americans.

In fact, the U.S. dollar has declined in value by nearly 50% since the euro was first introduced in 2002 — back then you could buy a euro for about $0.85. The adoption of the euro was a grand experiment, and the value of European currencies against the dollar stayed low for a while as the market surveyed the situation. 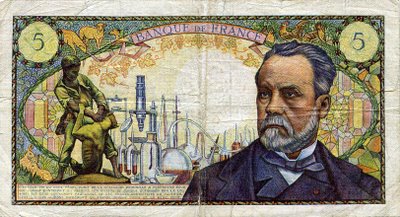 That's Louis Pasteur on the old five-franc note.
So where do we stand today? Even with the euro at $1.30, the dollar is still worth just about five French francs. Do the math: divide 6.50 by 1.30. So we are still where we were back in the 1970s as far as the relative value of the French and U.S. currencies go.

Still, I miss the franc in a way. The bills were so colorful and detailed. The euro notes are very plain in comparison.
Posted by Ken Broadhurst at 11:13