In the mail every Monday or Tuesday, we get advertising circulars from our two largest local supermarkets, Intermarché and SuperU. Smaller supermarkets like Champion, Proxi, and Ecomarché, and the "hard discount" grocers Ed and Netto, send out flyers less frequently. We have six supermarkets within 4 miles of our house, and we have two outdoor markets a week that close too. 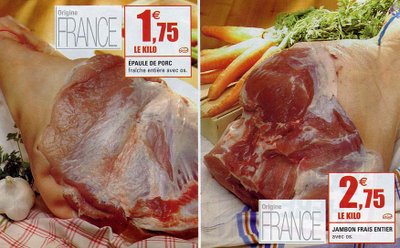 Fresh pork shoulder and ham on the bone (avec os). 1€75 per kilo for shoulder
is about $1.00 a pound, and 2€75 for ham is about $1.60. Notice that the pork
is Origine France — French-raised.
Now that I'm unempl... er... retired, I read the weekly Intermarché and SuperU ads faithfully, checking to see what fresh products are on special. The canned goods, toiletries, and sundries don't interest me much. But when there's a sale on fresh foods like ducklings, sausages, beef, green beans, cauliflower, cherries, salmon, or shrimp, I'm likely to make a special trip to the supermarket. 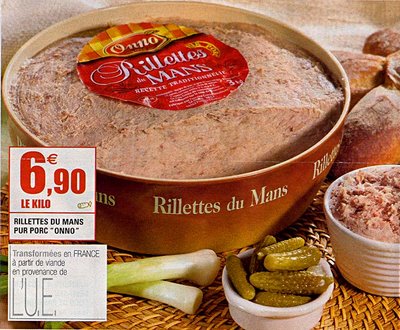 Rillettes are a potted meat made by slow cooking of lean cuts (of pork,
duck, goose, rabbit, chicken, etc.) in wine or water with aromatics until
the meat starts to fall apart. Then it's shredded or chopped and put up
in pots to be eaten cold on bread with pickles and onions. Both Le Mans
and Tours are cities known in France for their good rillettes. Notice that
these rillettes are made in France from meat that comes from the U.E. —
l'Union Européenne, which is the European Union.
The Intermarché flyer is an interesting one, I think, because it is devoted exclusively to fresh food products. The chain calls this le marché frais and includes a blurb saying that fresh food is often too expensive — les produits frais sont souvent trop chers — and pledging to offer lower prices (of course). The store's motto is "Tous unis contre la vie chère" -- all of us united against high prices. 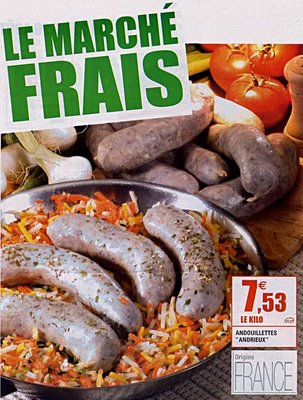 Andouillettes, which are "chit´lin´" sausages. In other words, they
are made from pork intestines. They are traditionally French
and produced in France using French products. Here's what
some wags say about a good andouillette:
Ça sent la merde mais pas trop !
The specials at Intermarché this week are fresh cuts of pork (among other products — more about those in future posts). The French eat a lot of pork, either fresh or prepared as charcuterie — the typically French sausages, pâtés, cured or cooked hams, rillettes, and so on. It seems to me that French pork is leaner and of generally higher quality than pork I used to get in the U.S. But then I think all the food here is better than in the U.S. ... That's my bias. 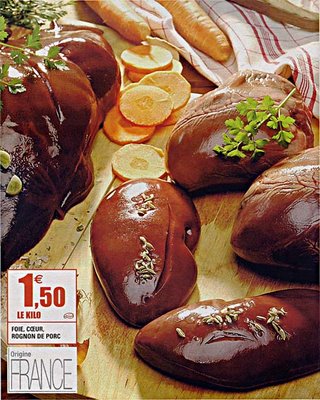 Pork liver, heart, and kidney are probably not items you would see
advertised by an American supermarket chain. Only 1€50 a kilo.
So what cuts of pork are on sale besides the ones in these pictures I scanned? There's boneless meat for skewers or stews called sauté de porc in French. There are spareribs (poitine fraîche) and thick ham steaks (rouelle de porc). There are slices of fresh pork bacon for grilling (tranches de poitrine à griller). And there are loin (longe de porc) and shoulder (épaule) roasts all tied up and ready for the oven. There are also a lot of charcuterie products including pork muzzle salads, pâtés, and headcheese. 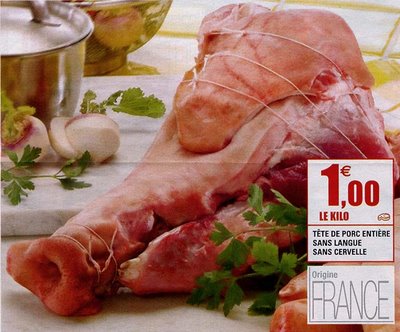 This is a pig's head sold without the tongue and the brains, which are
usually sold separately, and probably for a higher price. Again,
you probably wouldn't see this advertised in the U.S. You could use it
to make your own headcheese — fromage de tête. 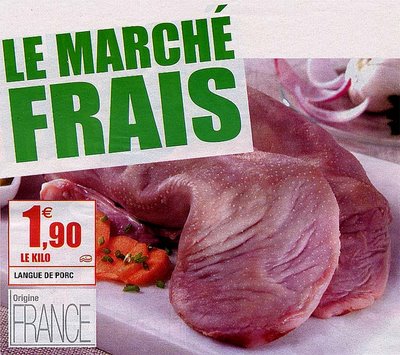 Pigs' tongues. I'm not sure how you prepare them. Notice that
they cost more than bone-in pork shoulder. Origine France.
Posted by Ken Broadhurst at 08:35