The château de Bellegarde is one of my favorite stopping-off points on the drive to Paris as we do it. We don't usually take the autoroute (the toll is $20 each way) even though that would be the fastest route. And the most boring. 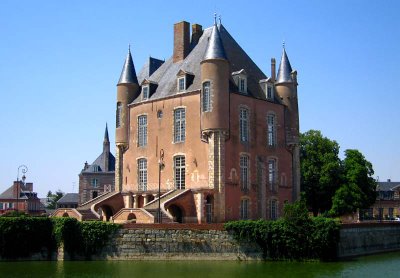 The château de Bellegarde, between Orléans and Fontainebleau
Instead, we drive through the forests of the Sologne up to Orléans, and then we head northeast toward Fontainebleau, passing through Châteauneuf-sur-Loire, Bellegarde, Puiseaux, Malesherbes, and Milly-la-Forêt. The countryside is pretty, and there's no traffic until we hit the freeway that leads into Paris, which we are on for the last 30 minutes of the three-hour trip. 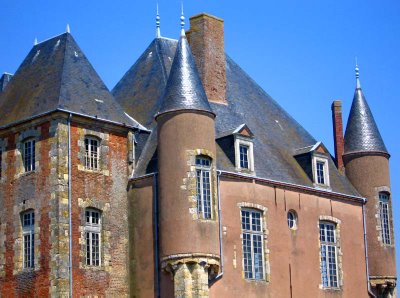 Close-up of the towers and rooftops
Bellegarde was a surprise the first time we did the drive, two or three years ago. We didn't know it existed. And it turned out to be the perfect stop for the dog. She could take a walk around the grounds and a couple of pipis before we headed on into the city. 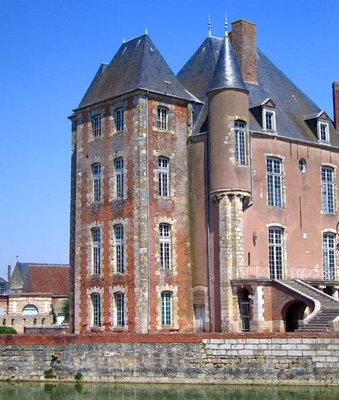 Brick tower added on in the 18th century
The château de Bellegarde was built in the late 1300s, so it's 700 years old. It was originally what is called a donjon in French — a fortified tower, or keep. But in the 1600s, it became the property of the duc d'Antin, who was the son of one of Louis XIV's mistresses, Mme de Montespan. 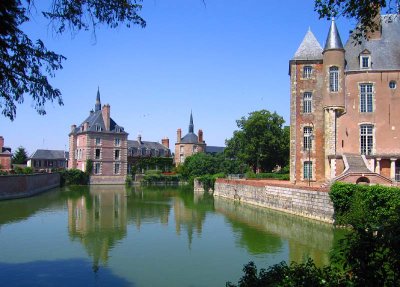 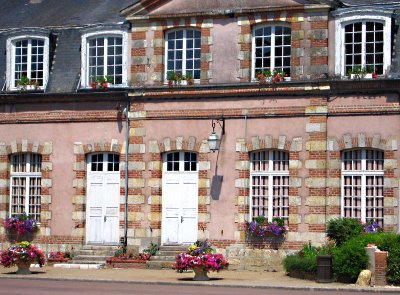 Façade of one of the duc d'Antin's additions
Like nearly all châteaux, Bellegarde changed and evolved over the centuries, as needs changed and building techniques and styles advanced. 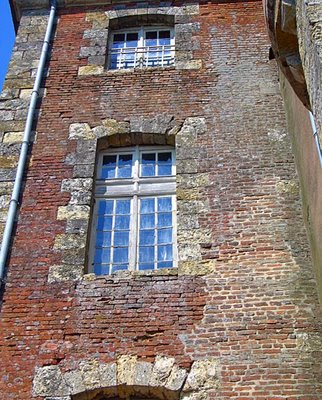 Detail of the side tower, built in brick in the 1700s
In the early 1700s, the duke had the place remodeled significantly, turning it into a residence by adding on new wings and outbuildings, the grand staircases on the front, and formal gardens. One of the "new" buildings is now the Bellegarde town hall. 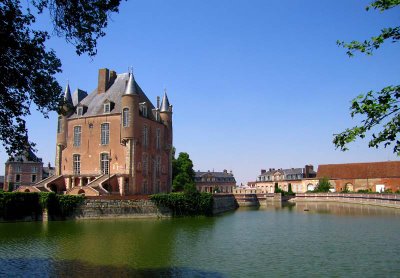 The moat at Bellegarde is actually a small lake
The château de Bellegarde is right on the main road that crosses the town. It's an easy stop, and it's nice to stroll around the moat, across the little bridge, and up to the château itself. There's a nice rose garden. 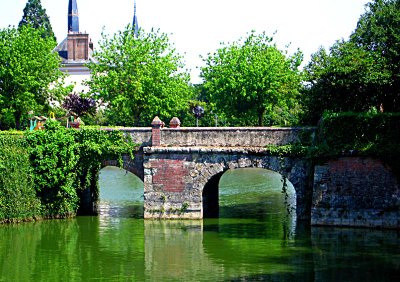 The bridge
I took these pictures after lunch in Combreux on July 15, 2006, when I visited Bellegarde with Marthe, Pierre, and CHM. It was a hot, clear Saturday afternoon and, again, we had the place all to ourselves. 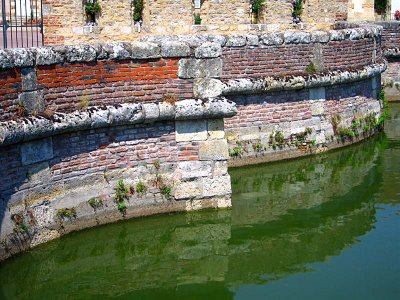 Brickwork along the edge of the moat